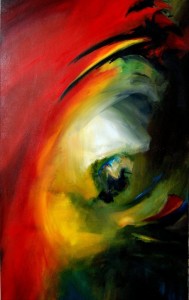 In conversations local artist Chauncey Secrist conveys a thoughtful intensity that ranges from playful to philosophical. His latest exhibit at Guthrie Studios is a reflection of that. On display is 15 years worth of work but the show has remained untitled because he feels it’s too soon in his career to do a retrospective. Instead, walking around Secrist’s show at Guthrie Studios is a journey through his emotional and philosophical landscapes.

“Creating art is cathartic, it’s meditative, it’s also a kind of compulsion. If I don’t do it my mood suffers. This is what I love and when you stop doing what you love you suffer,” Secrist says. With no formal training he dove in to the art world and started to experiment. “A friend of mine once described my process as ‘Avant whoops’ which is apt,” he says. The result is a range of work that varies from large abstract oils to mixed media collage.

Much of what Secrist creates is a translation of moods. One of his more striking pieces, titled Cyndi, is an abstract representation of a woman he was dating at the time. He describes her as vivacious, a feeling he conveys with striking colors and the sense of joy emanating from the canvas is palpable. It’s not immediately obvious the painting is unfinished because the relationship ended before the work was complete.

At times his work turns dark. “When I paint realism it’s usually because the rest of my life is in turmoil,” he says, adding that creating a realist piece is a meditative process. In contrast he has a collection of black and white abstract minimalist paintings that embody calmer moments. “To me they have a tranquil feeling. They’re a reflection of reducing complexity in my life and finding beauty in simplicity.” 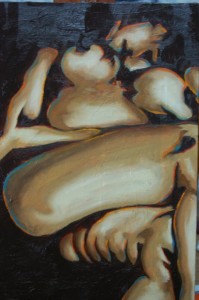 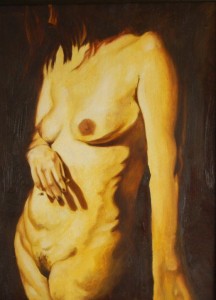 Another subject of interest to Secrist is the finite state of the world.  “A recurring theme in my work is the transitory nature of everything. Permanence is elusory. It may sound morbid, but in actuality it allows me to walk around in a constant state of wonder.” Secrist explains constant change is not only fascinating but understanding that things are temporary makes them more precious.Secrist’s work explores more than his mercurial moods. He revisits a number of philosophical themes throughout his show, one of which is the use of religious figures and symbols. “I’m not religious but there are a lot of elements in religious teachings that I find relevant and beautiful,” he says. He adds that religion is often misused for special interests and can result in harming people which is why he explains, “the bones in some of my religious work symbolize the death of ideals.” 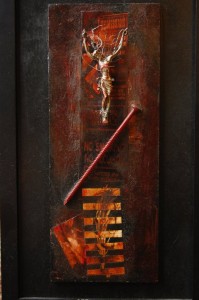 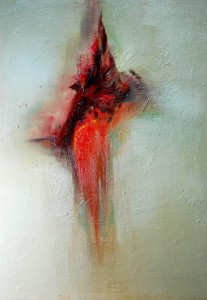 His wonder extends to finding beauty where it may not be obvious to others. This is most apparent in his figure drawings. In the paintings of his ex-wife, also the mother of his child, he stresses how much he appreciates the things that make her body unique, like stretch marks and a scar along her belly from a C-section. “I want to expose them, I want those features to be glorified.” Secrist laments the fact that people spend an inordinate amount of money to alter the physical appearances to attain a Barbie doll ideal. He feels there is a significant disparity between the time and energy people spend on their looks versus their mental and spiritual well-being.

Secrist sometimes prefers not to tell people the meaning behind his work. “It taints the unspoken dialogue between artist and observer,” he says. What other people see in his art is part of the satisfaction he gets from being an artist. “I’m mostly fascinated by people’s interpretations of my work. More importantly I just want them to engage with it.” With every hallway in Guthrie Studios covered by Secrist’s eclectic range of artwork it would be difficult not to find at least one absorbing piece. 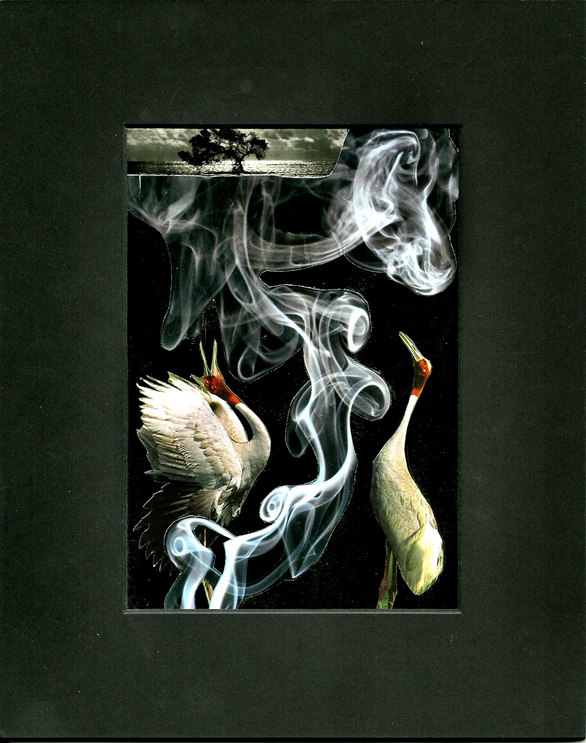 Note: Secrist is gathering donations of artwork to be auctioned at the annual fundraiser for Huntsman Cancer Institute. If you are interested in participating contact him through facebook: http://www.facebook.com/chaunceysecrist