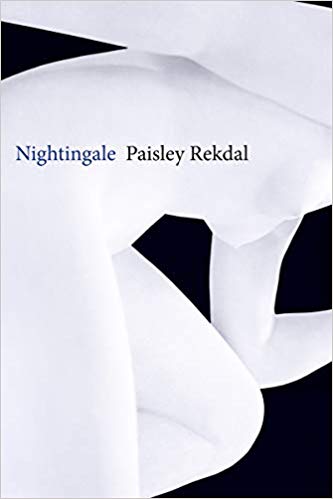 This collection of poems is in response to, a contemporary rewriting of, and in conversation with the stories and characters of Ovid’s Metamorphoses, interwoven with Rekdal’s own personal experiences of sexual violence, survivorship, and silence while examining the complexities of human transformation, animal resilience, pain, and death. Each poem hovers in the ocean of its own myth with intense and specific elements that somehow brought this reader closer to her own life experience, making the poems relatable and intriguing, whether you’ve studied Ovid or, in my case, never have.

Metaphors using unusual subjects and objects appear throughout — a fruit tree to start; then a knitted thylacine skin; a lover (also a survivor); four Marys all packed into one ekphrastic poem of suffering (along with Christ and Frankenstein); wolves, the slaughter of a goat, and a man in a horse mask, to name only a few. The variety of topic and form kept my interest, and I read the book all the way through without stopping — the first time on a flight and the second in my back yard on an April afternoon. The poet herself calls the book “dark,” with threads of violence and death throughout but not with the weight of drudgery, more with the friction of introspection, cross-sectioned with words arranged in such a way that they must be read aloud so as not to miss the sonic pleasure. In “Knitted Thylocene,” a poem reflecting on the taxidermy of cats and the knitted pelt of an extinct Tasmanian tiger on display in a museum, there are soft, sensual lines, such as

how wet each other’s mouth felt beneath

such bristles, each like a slick surprise: the butter sex

cut out of the sea urchin.

What especially resonated with me in a first reading was what seems to be a study on the differences between the living and the dead — what that means to those still alive as they observe what has taken place with death and the dying:

“Some deaths are good / and that makes them hard to grieve,” (from “Wolves”)

“the heart / of a god who takes what he wants / and never gives back,” (from “Four Marys”)

Human transformation is centered in this book’s spine. Whether from human to animal, from one gender to another, or from the violence, torment, and trauma that changes the physical body and morphs the psyche, the characters portrayed undergo alterations and renovations not unlike those the poet experiences and exposes in the second section of the book. In an amalgam of personal essay, poetry fragments, and other commentary, Rekdal describes an incident in which she too was transformed by an act of sexual violence as well as by silence, which seems to connect to an earlier poem in the collection “Gokstadt/Ganymede,” a reflection on a past lover’s death and his childhood trauma. Here, mid-poem lines are saturated in vulnerability,

What you sense, what I hated:

some part of me loved you, not in spite of,

but because you had been raped.

In the current political environment and an era that has given some space to often quieted voices, the poems in this collection are not only well-crafted but needed.

In Nightingale, the change and distortion of the human condition are woven together by the archetypes of myth, personal narrative, distinctly specific experience, and an impeccable control of language as an art form. In the final lines of the poem “Driving to Santa Fe,” the crux is well-discerned:

Once, I was afraid

of being changed. Now that is finished.

The lynx has me in its eye,

I am already diminished.

You can hear Rekdal talk about Nightingale in her discussion with fellow Utah poet Kimberly Johnson on Superstition Review’s blog as well as on KUER’s RadioWest with Doug Fabrizio.

Trish Hopkinson’s poems have been published in Tinderbox, The Penn Review, and elsewhere. Her third chapbook Footnote was published by Lithic Press in 2017. She is co-founder of Rock Canyon Poets and Editor-in-Chief of the group’s annual anthology, Orogeny.