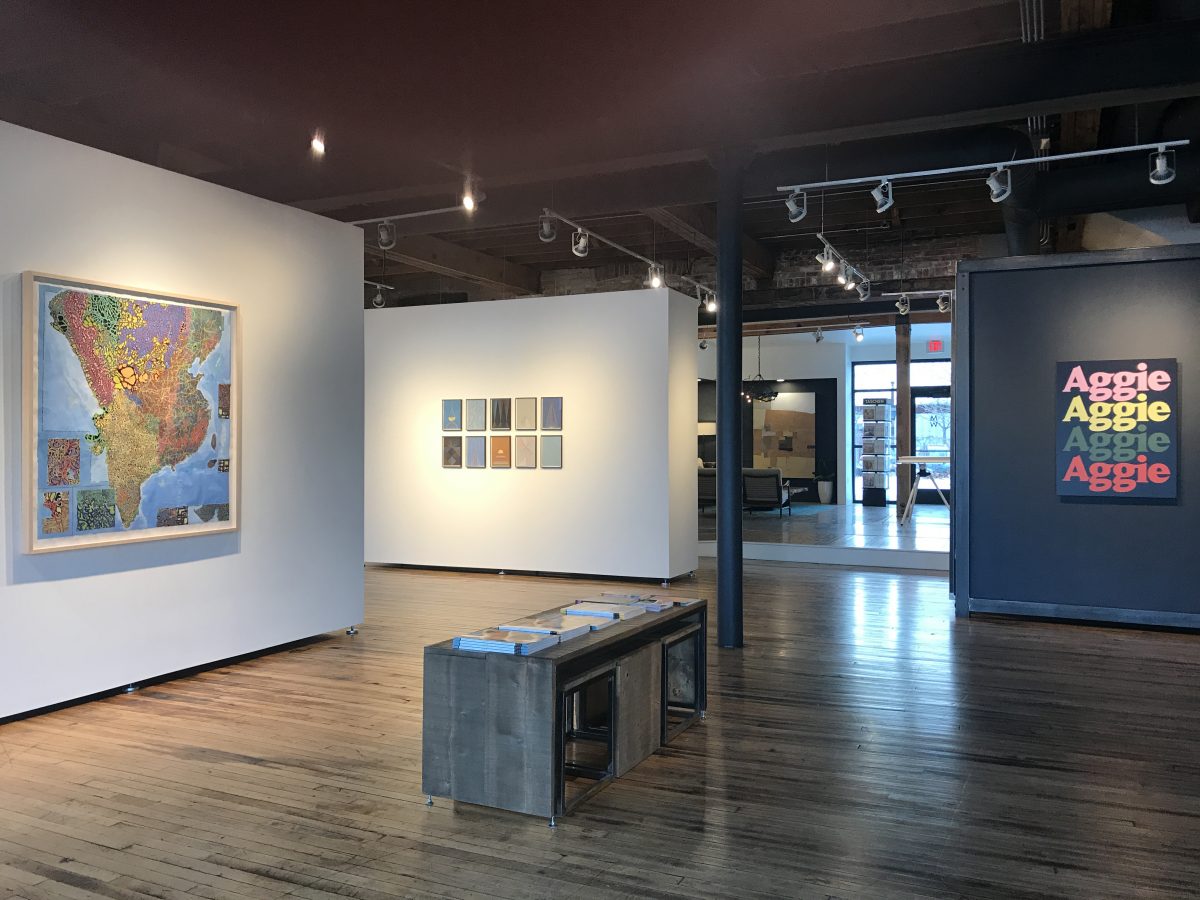 Installation view of “Art for Justice” at Modern West

Over just the past 40 years, the number of people in the nation’s prisons and jails has increased a staggering 500%, for a total of 2.2 million people currently behind bars, according to The Sentencing Project. Agnes “Aggie” Gund — art collector, philanthropist and President Emerita of MOMA — first learned of these harsh facts when she read Michelle Alexander’s The New Jim Crow and Bryan Stevenson’s Just Mercy. Gund decided to use her love of art and her influence to create a nonprofit to address systemic racial and punitive problems, selling a treasured piece from her collection, “Masterpiece” by Roy Lichtenstein, generate the start-up funding. This story is chronicled in the documentary Aggie, premiering at Sundance on Friday, January 24 and with an exhibition of impressive contemporary works from her collection at Modern West Fine Art (additional works are being exhibited at Park City’s Susan Swartz during Sundance; the full exhibit will open at Modern West Friday, Feb. 21).

Today, mass incarceration impacts people of color on an expansive and disproportionate scale, with 67% of the prison population being people of color, but just 37% of the overall US population, according to The Sentencing Project. One of the Art for Justice Fund’s central strategies is to change the narrative about crime and race through art, and the represented artists in the Art for Justice exhibit have used their work to address these issues. “It’s incredible to have these works in Utah and be engaged in this crucial conversation. To have such a high caliber of art right here is a real privilege,” says Shalee Cooper, director of Modern West. 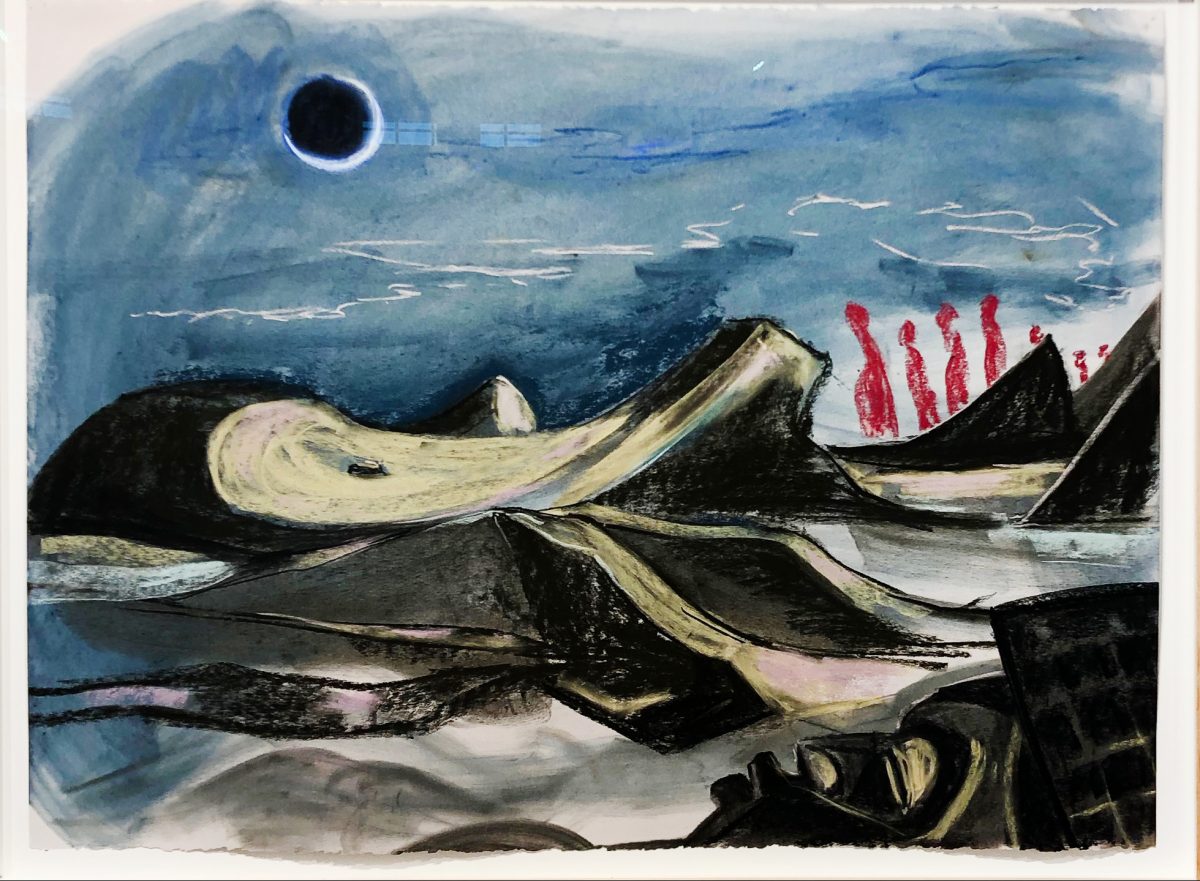 The Art for Justice Fund
has four central strategies. First, keeping people out of jail with work on bail reform, prosecutorial accountability, and art-based diversion programs for youth. Second, reforming and appealing excessive prison sentences. Third, promoting rehabilitation for formerly incarcerated people and their families. And fourth, changing the narrative through art. Among the many celebrated artists represented in the show, one of the most recognizable for challenging racist narratives is Kara Walker, recipient of numerous awards including the MacArthur Foundation Achievement Award in 1997 and the Eileen Harris Norton Fellowship in 2008. Known for her room-sized silhouettes — frank portrayals of antebellum violence, racial caricatures, and slave life — Walker pushes audiences to think about the dark realities of the country’s history often swept under the rug.

In her piece at Modern West, “Bureau of Refugees: July 18, ‘threatened to kill a black man who saw him do it’” (2007), an eclipse hangs in the gray-blue, brooding sky, over a dark landscape of writhing yellow, black, and white shapes that resemble boats bobbing in water. In the background, a row of red figures march under the smoky sky. The title references the Bureau of Refugees, Freedmen, and Abandoned Lands, which was created in 1865 by order of Abraham Lincoln, to “direct such issues of provisions, clothing, and fuel, as he may deem needful for the immediate and temporary shelter and supply of destitute and suffering refugees and freedmen and their wives and children.” With current global conflicts displacing populations and the US government resisting refugee placement, the work speaks to the many waves of displaced and othered people who have persisted to survive through violence, migration, and alienation throughout the nation’s history.

Judy Glantzman also explores migratory themes in “Safe Passage.” This tetraptych, or four-part work, is made of collaged pieces of paper with drawings, splashes of ink, and paintings in muted colors. Different marks with ink, graphite, and acrylic make the parts feel like they’ve been created from collected material over a long period of time, reminders of a journey. In the bottom right work, a small rowboat floats on layered, turbulent pieces of marked paper. In the context of the show, and the fact that this art was created in 2016, the viewer can’t avoid thinking about the small crafts full of refugees in the Mediterranean or people throughout history who gathered what scraps they could of their former lives to flee to a safer place. 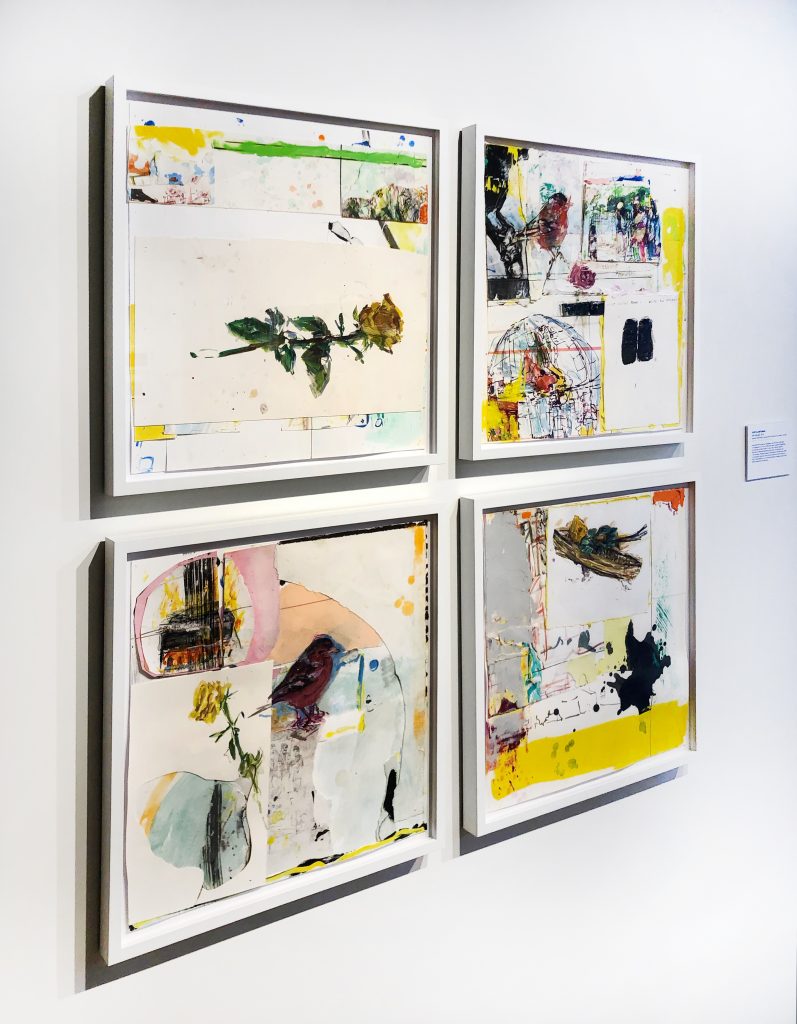 Rebecca Riley has two acrylic pieces in the show, “Composite Map: India, China, Peru, and Afghanistan” and “Cellular Explosion: Merge 2,” both of which feature small rounded shapes of bright color and black, separated with lines that look topographical or like cellular walls. The first map piece is a striking, colorful collage with acrylic that hangs at the gallery entrance. “Cities, countries, their creation and destruction, their changeable boundaries, the manipulation of our environment, are to me a kind of dynamic art created by the subconscious and conscious will of whole populations of people,” says Riley. The combination of visual representations of countries separated by such large cultural and literal distance speaks to a utopian vision that marries the rhythms and patterns that connect people across the globe. 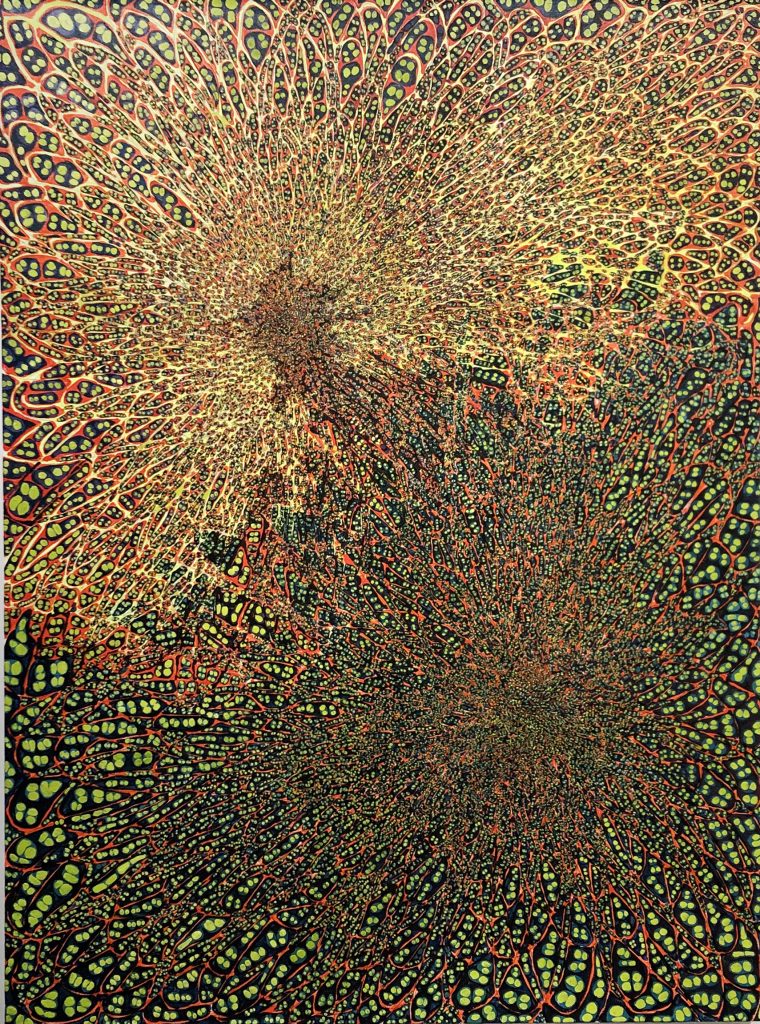 “Cellular Explosion: Merge 2” uses the same creative technique in her map pieces to give a look at the microscopic realm. “My map pieces developed out of my earlier work exploring the evolving structures and patterns of dynamic systems, from the molecular to the cosmic,” Riley says. With the bottom right half of the piece set against a black background and the upper half against a white one, two blooms of dots of color and swirling lines converge in the middle. The pieces are unique in their use of an almost-neon palette and the minute detail that covers the large canvases. Both pieces show the harmonies that exist between people, civilization, and the natural environment.

Another artist in Art for Justice that many viewers may recognize is Jan Groover. She was a prominent late-20th-century photographer who exhibited in many large museums, including MOMA, in New York. “Untitled” (1988) is a still life photograph of different ceramic and glass vessels on a table, whose palette and subject matter resembles the work of cubist Juan Gris, active in Paris in the early 20th century. “By using photography instead of painting, Groover complicates the notion of representation, and emphasizes the capacity of photography to make works of the imagination,” says curator Susan Kismaric. “The drama in Groover’s pictures arises from the tension between the form of the picture and the things we know to exist in the world.” The work has many layers, from different levels of photographic exposure in the foreground and background to the clear art historical reference. Showing these pieces from a private collection at a commercial gallery reflects gallery owner Diane Stewart’s and the overall establishment’s commitment to education. “Even though we’re a commercial gallery, this is really more of a museum show. We’re able to present distinguished pieces from the Gund collection as part of our mission to inform, educate, and contribute to artists’ creative process,” says Cooper. 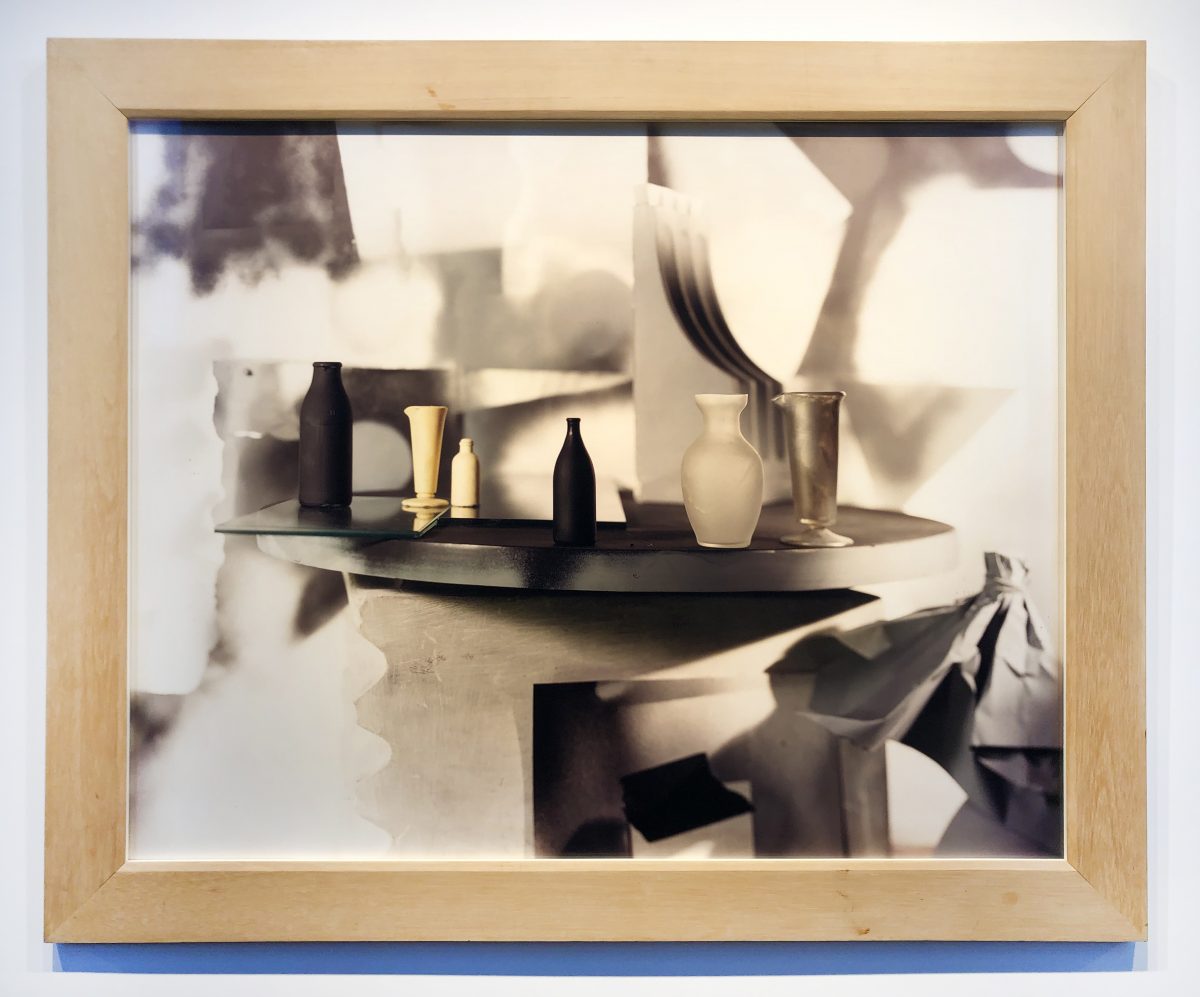 Salt Lake City’s winter begins to thaw in January, as the Sundance crowd of creators and film enthusiasts flies in for world-class art. Seeing the good that the art world is doing is one way to shake off the melancholy arising from the state of the nation, including mass incarceration and the immigration crisis. Whether you’re a local or looking to see one-of-a-kind art while visiting Utah, Art for Justice is a unique chance to see influential pieces from a private collection that you won’t want to miss. 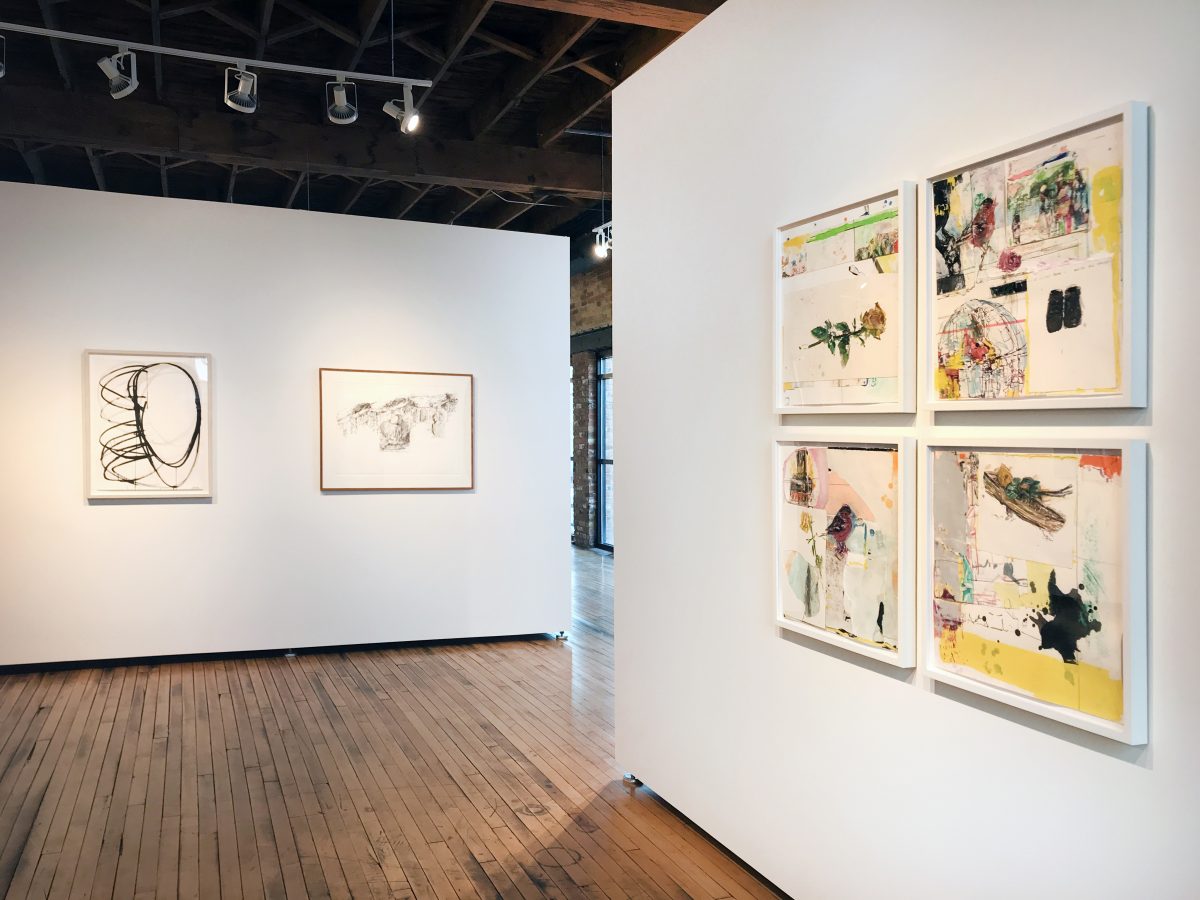