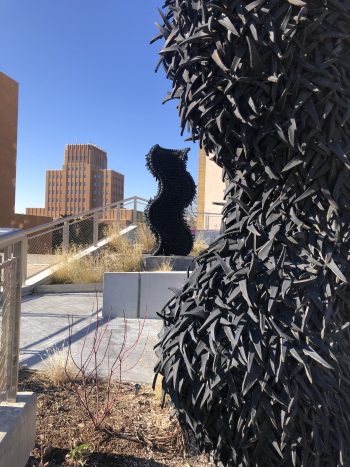 Regular readers of 15 Bytes will have read about the Ogden Contemporary Art Gallery, known succinctly as the OCA. Anyone who followed up a review or event notice by visiting won’t need to be told what a wonderful venue it is, with its modernist, two-story, open plan gallery in the front. Unmentioned so far, though, behind the gallery there are rows of studios, each with a sliding door that allows the occupant to open up the whole space if they wish, whether to encourage viewing, to sell, or meet potential clients. Behind the gallery upstairs is a spacious lobby, suitable for meetings and encounters, and below is a café and bookstore. Each of these features, part of The Monarch, was built on a generous scale and could make most artists, even some who already have a working studio, dream of moving here.

But what about the outdoors? Recently opened next door is the Dumke Arts Plaza, a joint project of the Dr. Ezekiel R. and Edna Wattis Dumke Foundation, the Matthew S. Browning Center for Design at Weber State University, and the Weber State University Telitha E. Lindquist College of Arts and Humanities. To kick things off right at the Plaza, the Mary Elizabeth Shaw Gallery at Weber State selected Chakaia Booker to show three of her large sculptures, which unless they know her work, are unlikely to have much in common with anything visitors to the new complex have seen before. 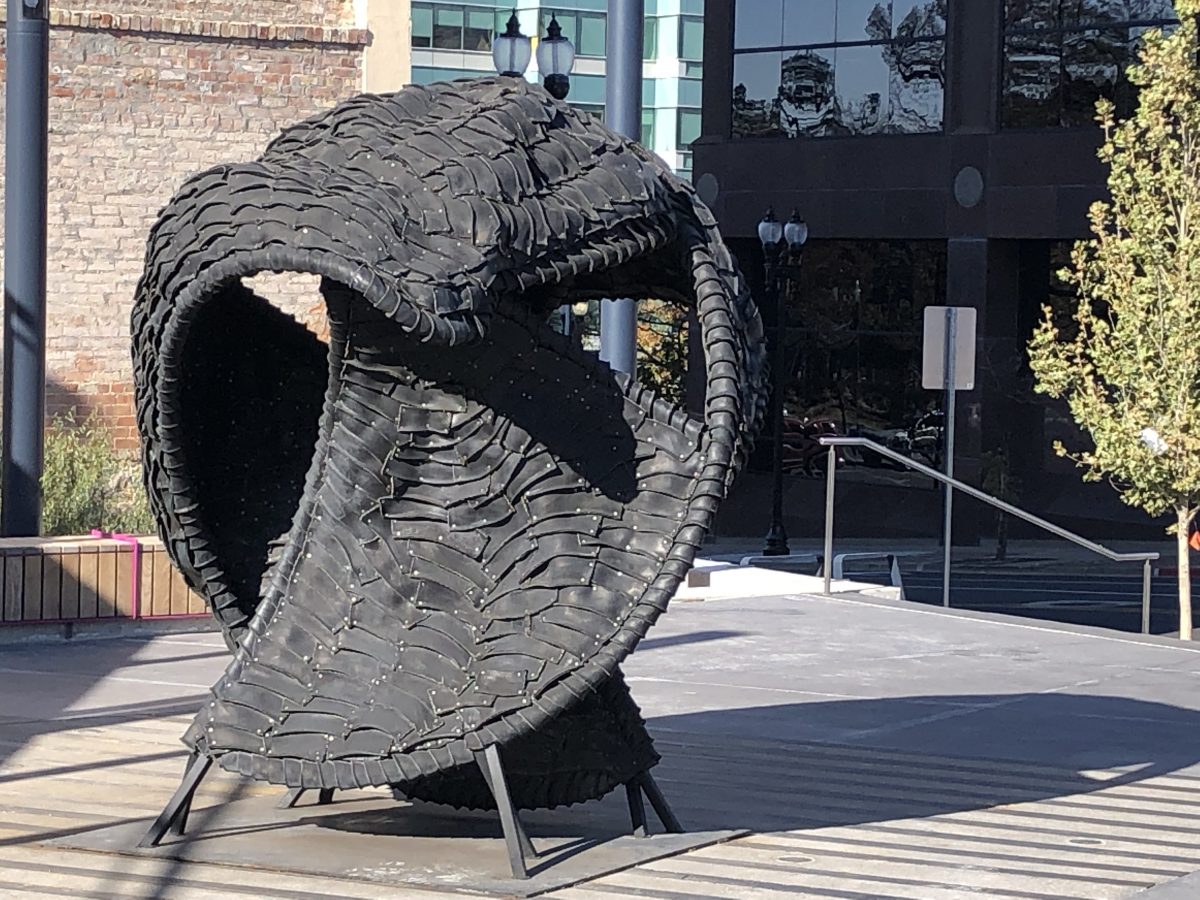 Chakaia Booker was born in Newark, New Jersey, in 1953, and is among the better-known American sculptors internationally. Her signature works are monumental abstractions made of stainless steel covered with recycled tires. If that sounds dreary or industrial, it is neither. Rather, they seem almost alive, and even though they don’t actually move, due to the complex ways she twists their frames they do seem to react and even writhe as a viewer walks around them. They’ve been acquired by more than 40 major collections on four continents, and Booker has also received numerous grants and fellowships. While what they look like is a valid question to ask, the precise answer will depend on who’s asking. They look a little like many things, but only exactly resemble themselves.

OK, the three at the Dumke Plaza are black, as befits their origin from tires. There the resemblance ends. Chakaia begins by cutting them into a variety of shapes, including strips that form borders, wrap around the frames, and twist into knots. Other places they resemble pennants, or blades of grass, or the scales of some dragon-like creature, whether a magnified view of a microscopic organism or a monster actually bigger than you. Although they are used very differently, they often closely resembled some of the paper masterpieces of Lenka Konopasek. 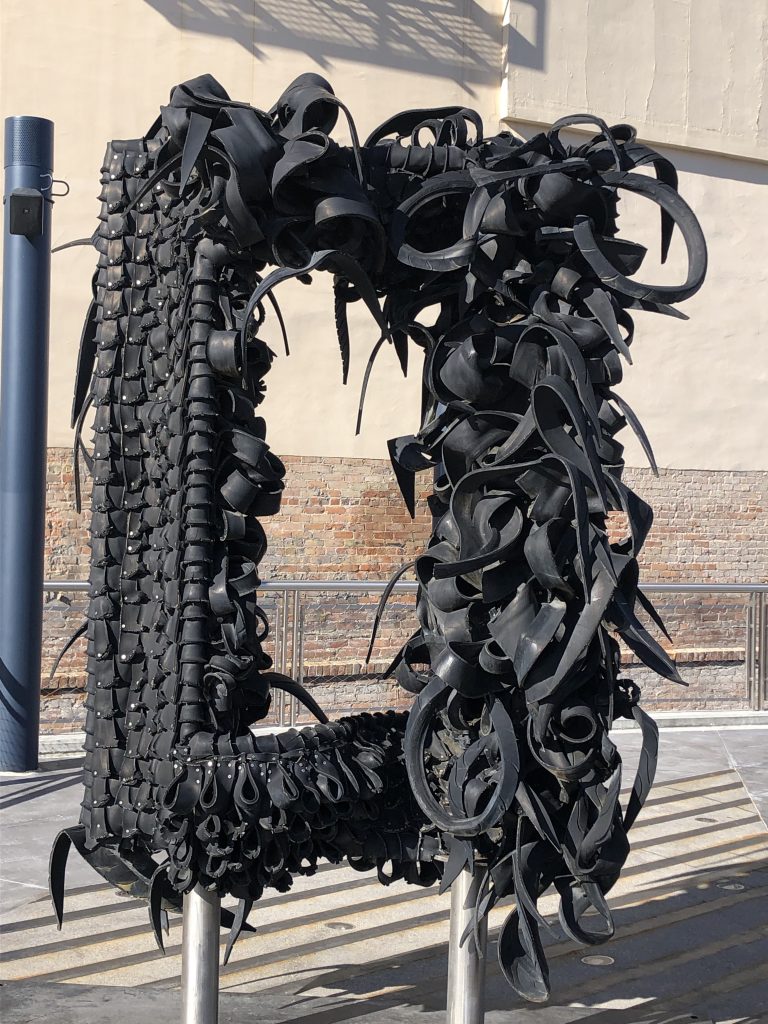 Chakaia plays with positive and negative space, with rough and smooth textures, and with openings like windows. A two-part work called “Gridlock” offers two tall structures, smooth on the inside and shaggy on the outside, that seem to engage in a dance with each other over a distance comparable to their height. “What’s Not” is a rectangular frame through which one sees and which seems to invite climbing through to what feels like another dimension. The largest and most structurally complex is “Pass the Buck,” which is circular but seems to pull one edge through its middle, like a giant piece of laundry with one sleeve turned inside-out, making it a challenge to figure out which is the proper inside and which the exterior.

The Plaza itself is not a level surface, but climbs gradually in a series of ramps that are interrupted by benches and planters. The works shown there can be seen from above, from the OCA, from below on the ground, and approached by various paths that present views of various sides. The sculptures certainly look weatherproof, but it’s not clear how long they will remain in place. To imagine these convoluted black forms with a layer of white snow is to take a complicated visual experience and make it even more satisfying. 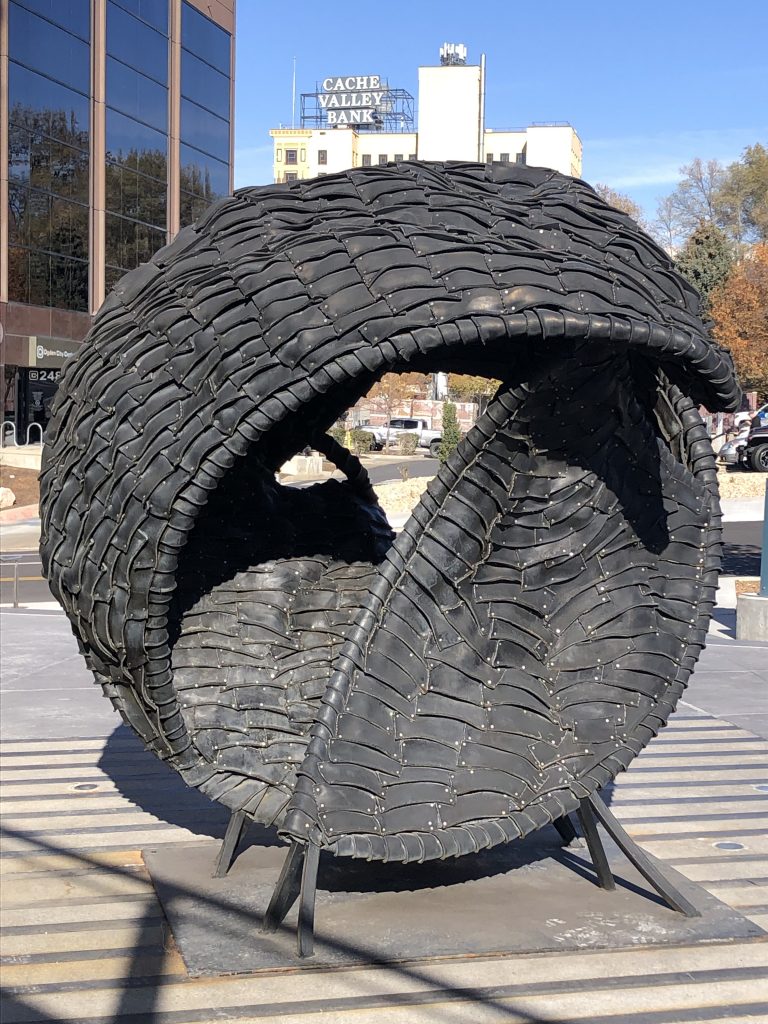 Another view of “Pass the Buck” (photo by Geoff Wichert)

Tagged as: Dumke Plaza, The Monarch