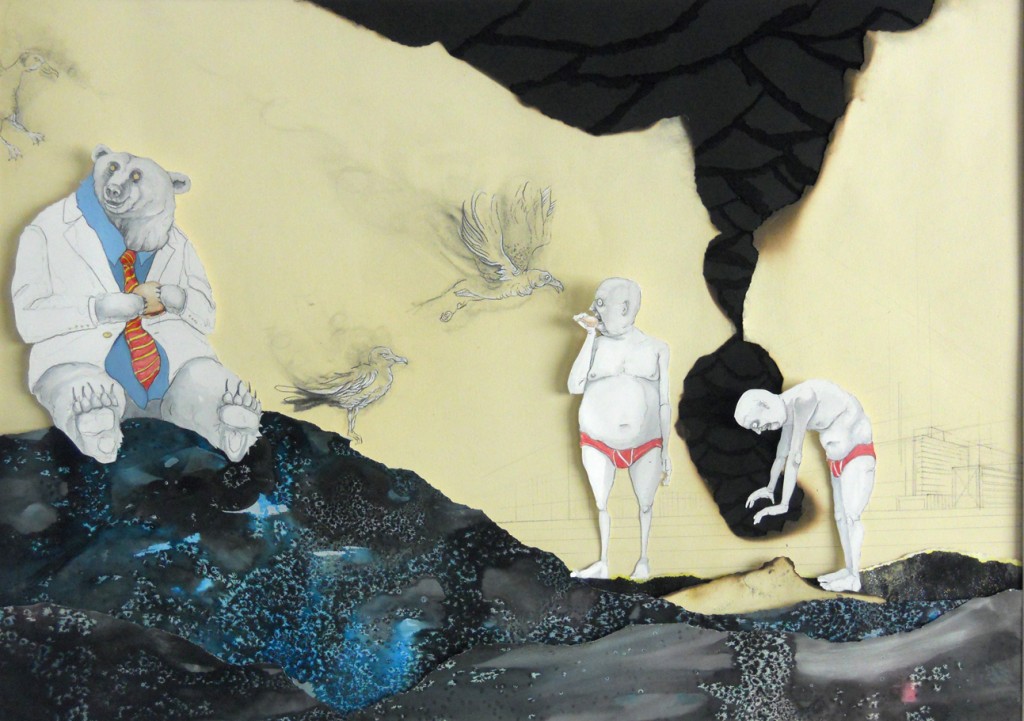 “Freezing to Death in Croyden,” a collaborative work by Chad Crane and Zane Lancaster

Art is a highly individualized process. So, how does an artist, accustomed to working hours on end in a solitary studio, open up their creative space to another and still manage to make a body of work that maintains authentic aesthetic qualities? How do collaborators deal with the temperamental clashes that may ensue? As ideas thought brilliant by one artist are scrapped by the other, how are bruised feelings avoided? In their exhibit at Kayo Gallery this month Chad Crane and Zane Lancaster explore this dynamic, and suggest, “If negotiations turn sour, snarl and reveal fangs.” 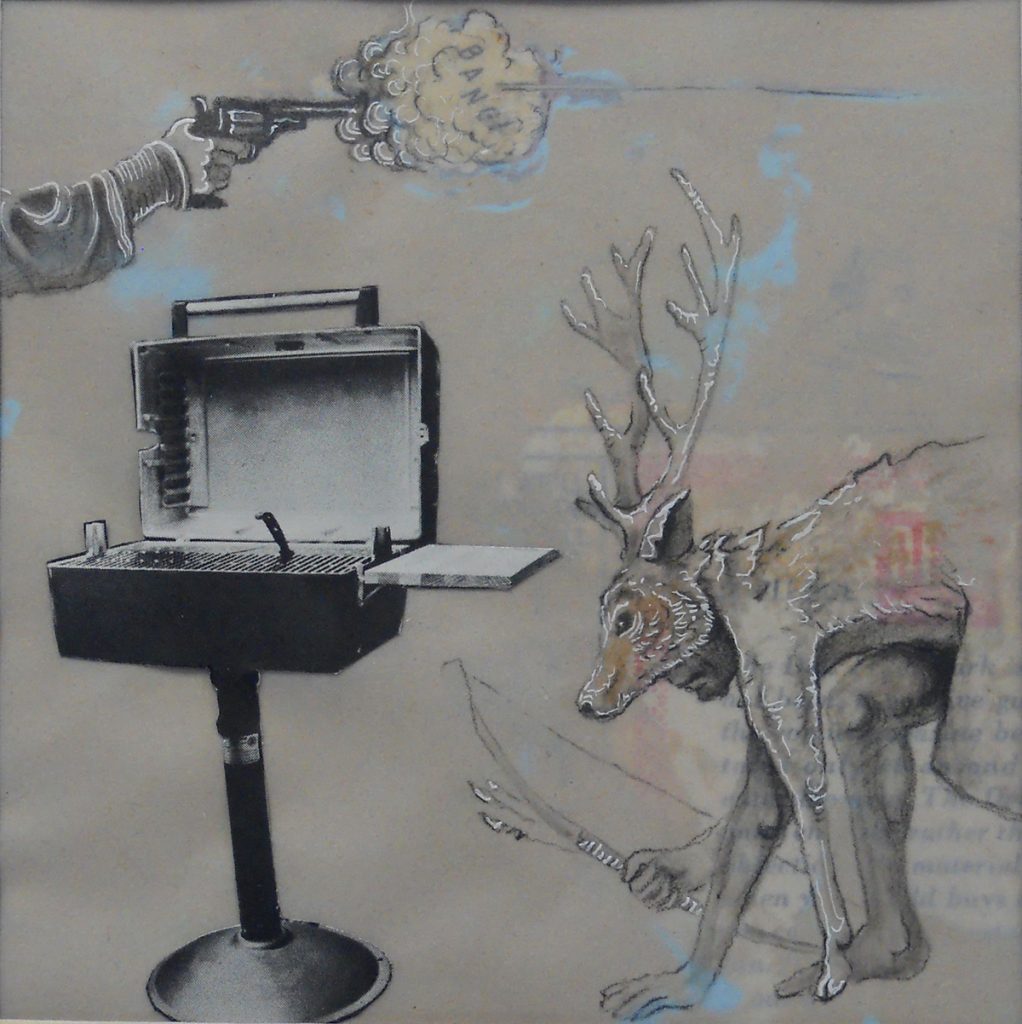 Not Invited to the Barbecue, by Chad Crane

Those familiar with Crane’s and Lancaster’s work will recognize characteristic elements from their individual bodies of work — Crane’s mysterious scenes combining animals, iconic American imagery, codes and symbols, and Lancaster’s displays of the excesses of modern life in the form of paunchy bureaucrats and unhealthy, obese figures. But this newest body of work has much more bite, and more teeth.

We’ll Need to See Some Credentials features pieces both individual and collaborative. The magic of the show is that its cohesiveness extends to all the works. A common theme and technique is maintained throughout. Even the collaborative works appear as a seamless whole as if a new artist emerged from the combination of the two. No one image or figure seems out of place. 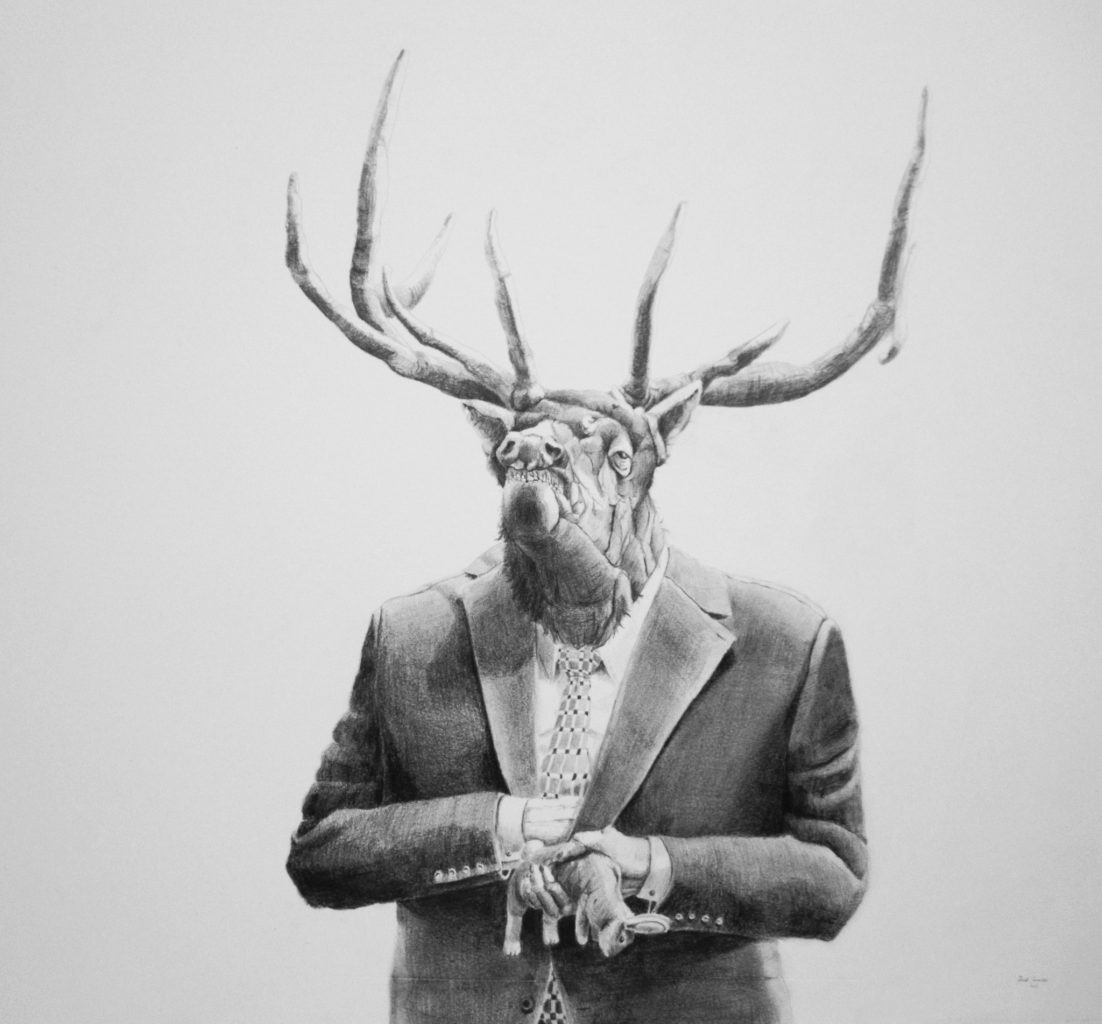 Rendered mostly in black and white, like a newspaper featuring the latest headlines, each piece conveys a kind of striking bleakness. Made out of cut, ripped, and even burned paper, the works exhibit a visceral process, reemphasized by their content. Images of aggression and domination abound in these icons of contemporary power; figures are literally clothed in it. The corporate suit suggests CEOs, bankers, and lawyers. Others are clad with the skin of deer and sheep, savage trophies of their kills.

The viewer soon comes to realize the exhibit’s message goes beyond the idea of “wolf in sheep’s clothing.” Suburban dads cover themselves with the skins of animals, hiding the savage beneath a comfortable veneer. Implements of the barbeque appear throughout, hearkening to caveman traditions of preparing meat over a fire. We are perpetual consumers, always feeding, never satiated. Man is the king of the beasts, and also the most primal. 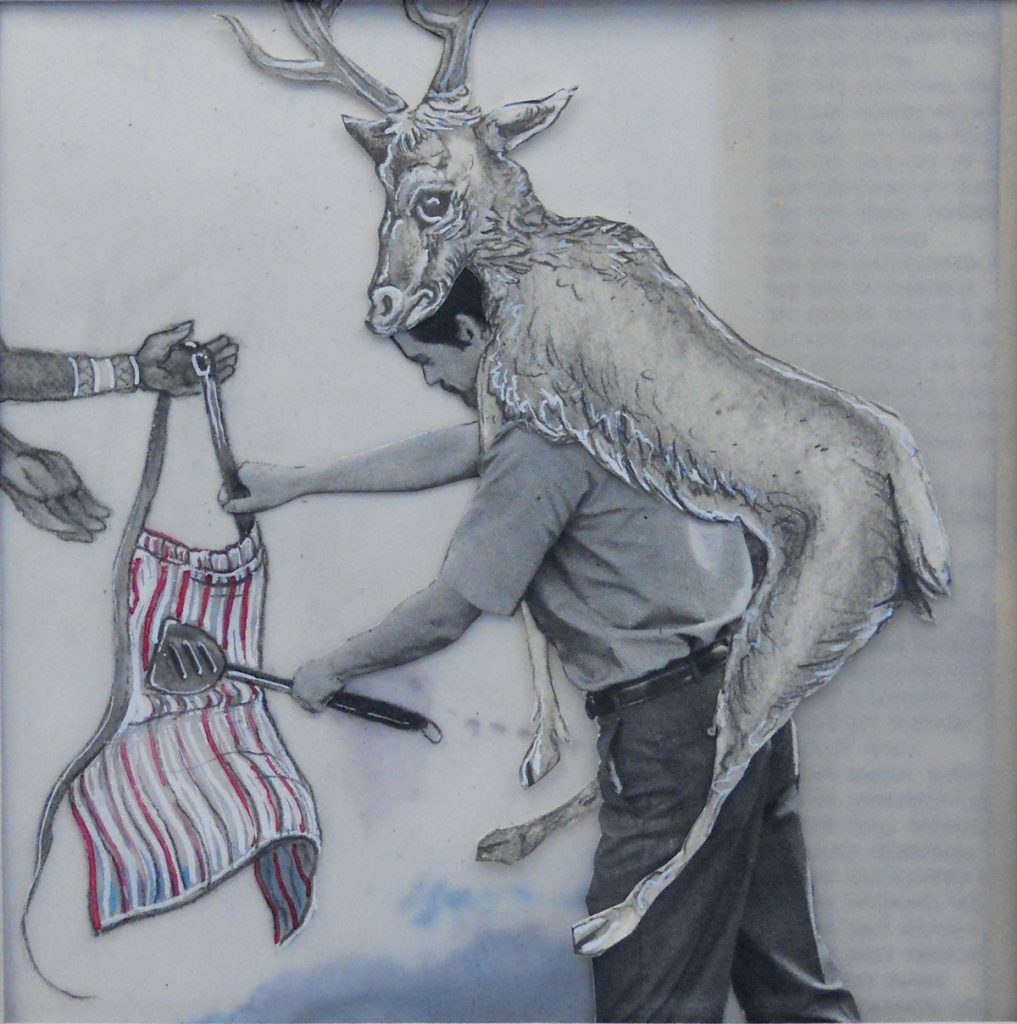 “Good Trade. Now Hand Over the Spatula,” by Chad Crane

Soulless corporate carnivores lure viewers into a sense of complacency, where predators await. This exhibit allows us to pull back the veil, see behind the closed boardroom doors to unmask the true nature of these powerful figures as inherently deceptive and animalistic. They feign friendliness, but the truth is, as one title suggests, “What is Yours Will Be Ours.”

We’ll Need to See Some Credentials is a jarring exposé, yet possesses surprising humor that will make viewers laugh out loud. Viewing such absurd imagery as a wolf wandering with a spatula gritted in his mouth, or a fish dressed in his best business suit, we wonder how the familiar can be so distorted and yet so truthfully rendered. As if subliminal messages have taken hold, we may feel unusually hungry upon exiting. We become the animal, on the prowl for new offerings from these two artists, who have proved that no matter how much we consume, we will always want more. 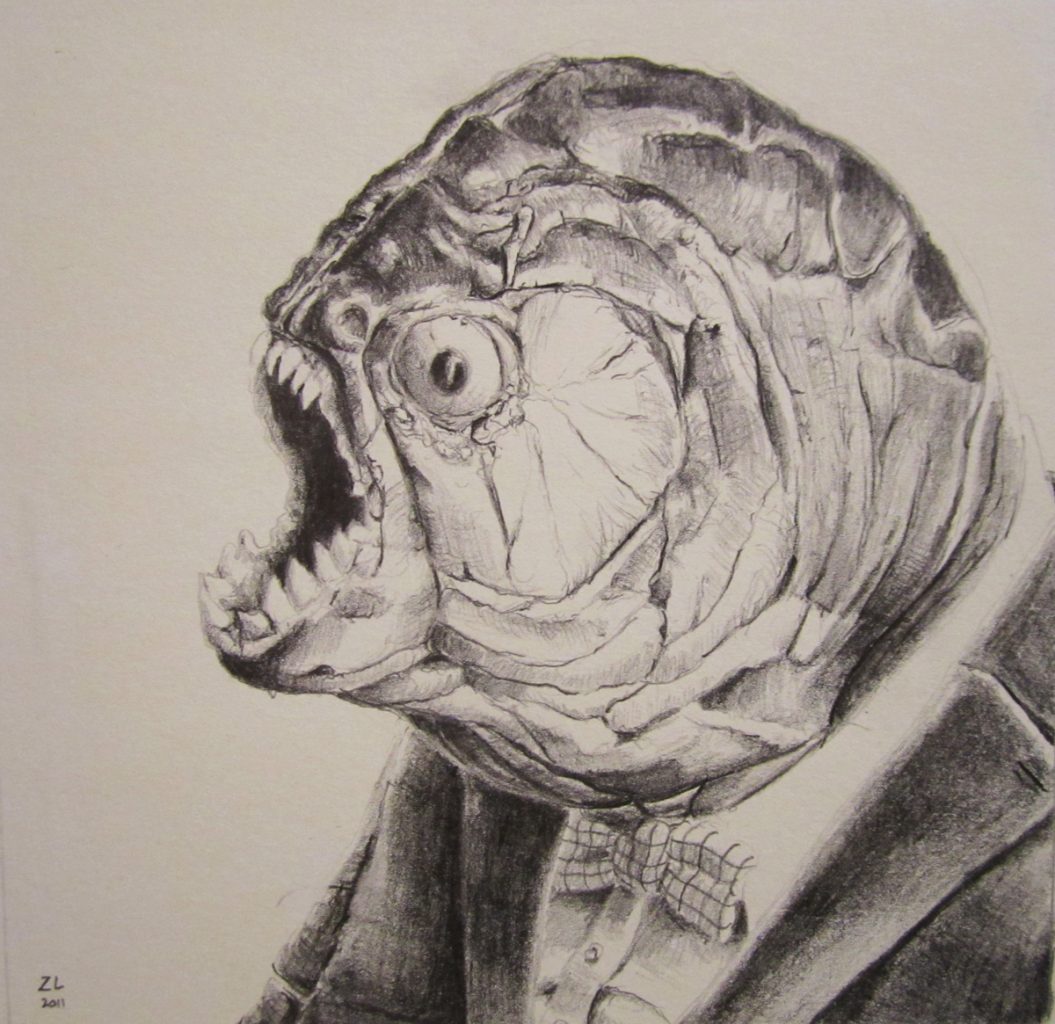 I’ll Have My Partners Look It Over and Get Back To You, by Zane Lancaster 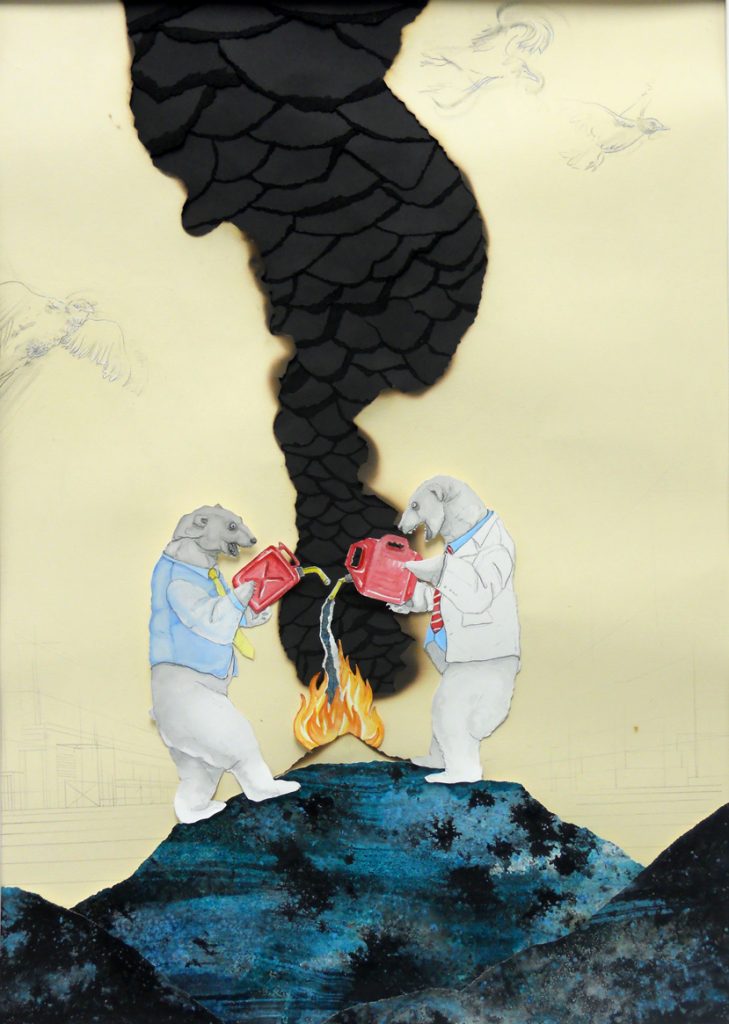 Hippies are Suckers, a collaborative work by Chad Crane and Zane Lancaster

Sarah Moyer has over ten years of experience engaging in collaborative creative projects. She’s worked with with artists of all ages, both in Philadelphia and Salt Lake City. She received a MFA in Community-Based Art Education from the University of Utah, and possesses a BFA in Painting and Drawing from West Chester University.