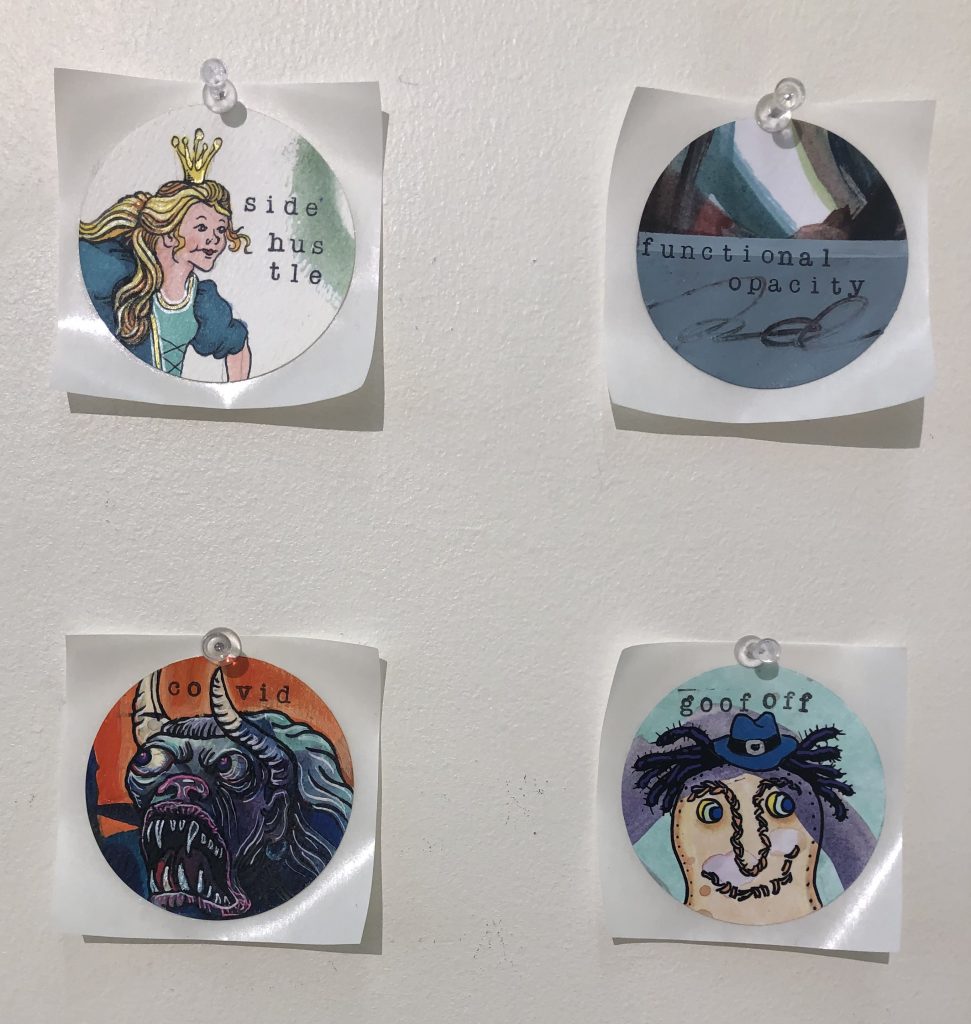 One of the great stories of European art concerns Leonardo da Vinci’s unfinished masterpiece, “The Adoration of the Magi,” which was abandoned, left lying face down in a stable, and nearly lost. Eventually it was recovered, repaired, and hangs today in the Uffizi Gallery. Note that it was restored, but not finished. An incomplete Leonardo is worth going to great lengths to see and contemplate. But what about unfinished student work? What if some students show unusual promise but are initially unable to overcome what challenges them?

The question weighs heavily on Chad Crane, who teaches art to hundreds of students a year at Layton High School. Among them are teenagers with special needs, studying in an environment where the individual attention a promising apprentice artist should receive is in short supply. These students, each of whom possesses unique skills trapped behind daunting impediments, present Crane with a challenge: how to be certain their promise doesn’t go to waste. He’s chosen to handle it through collaboration, a bold path in which conventional notions of a creators’ unique rights are sacrificed by both parties. He’s also taken the opportunity to show this work in a month when three of the Bountiful Davis Art Center’s five shows are collaborations, which allows his unusual approach to be seen in an enlightened context, as one of a range of possible options for artists. 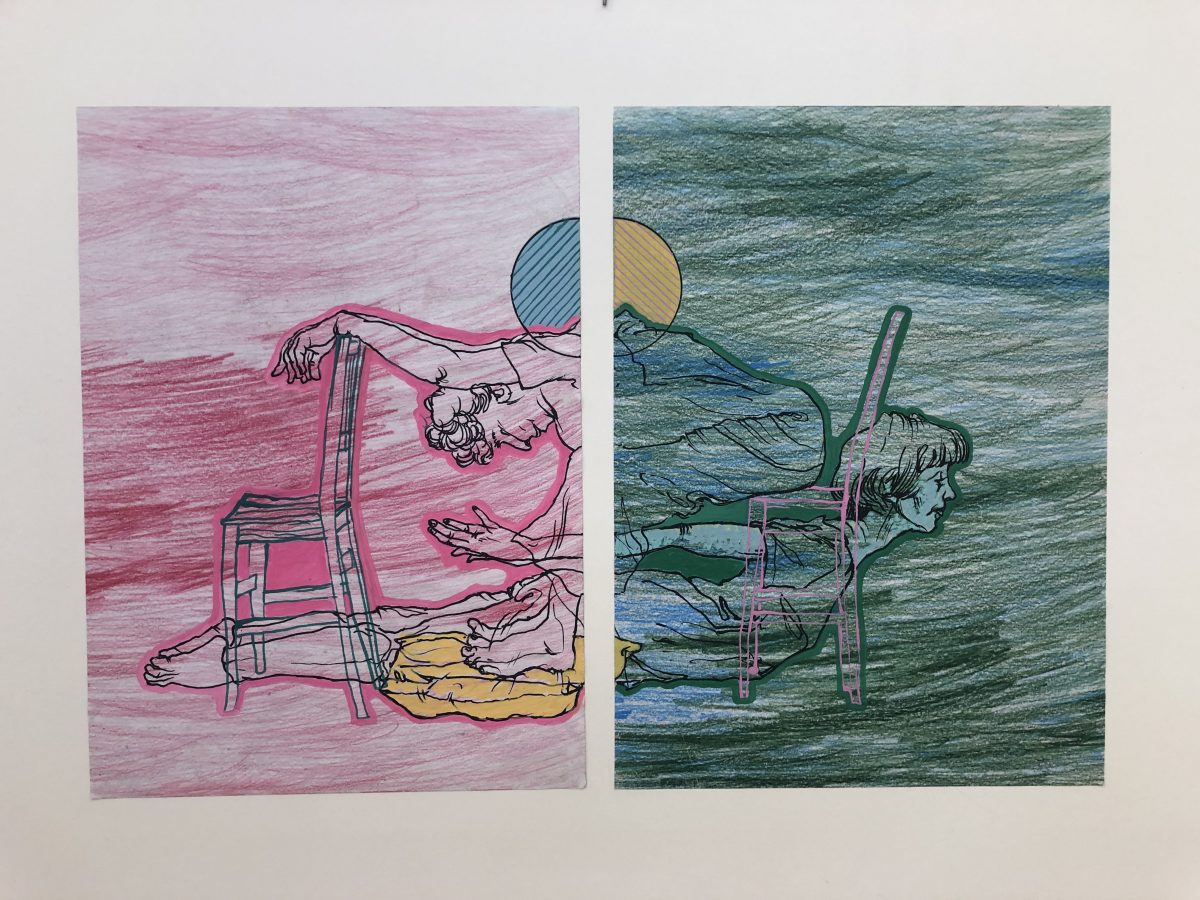 One of Chad Crane’s collaboration with Matthew Trunelle

Consider, for example, student Matthew Trunelle, who spent his time in class laboriously covering both sides of sheet after sheet of paper with dense, linear scribbles: colored pencil patterns of the sort that nevertheless reveal something as unique as fingerprints: no two persons would create the same patterns of lines and colors. Then, having filled a portfolio with an entire term’s work, he abandoned it in the classroom, where his teacher discovered it while cleaning out the classroom in preparation for the next term’s students. Fortunately, Crane was familiar with the relatively recent popularity of a technique knows as “prepared ground,” in which an artist works not on blank paper, but on a leaf that has been treated with watercolors or other adulterants, sometimes sandpapered down and reapplied, all in an effort to artificially age it and give it the character that a lost and found piece of paper might otherwise acquire naturally. At least that was how it started: artists attracted to the technique now see the patina as an infinitely variable support. Crane decided to draw on Trunelle’s pages, treating his work not entirely like mere backgrounds, but attempting to work with and complete the feeling he found there. For subjects he chose a class in Chair Yoga for Seniors, drawing and fitting the figures into the pattern of lines Trunelle had created. Since Trunelle had covered both sides, Crane cut out a shape on each drawing, then used the cutout, flipped to show the other side, to accent the chosen side. While he chose not to title the finished works, he treated each one individually. Some he combined for a particular effect, and one he cut out around the drawing’s contours to emphasize the connection between the two artist’s efforts.

The most elaborate of Chad Crane’s collaborations was done more in response to, rather than in cooperation with, the student, Jaxon Bogart. Bogart gave his teacher one of his portraits, which didn’t immediately inspire Crane, though he did hang it on his bulletin board. He refers to what came later by saying his work and Bogart’s “don’t merge and share a space the way the other collaborations in this show do.” After he’d spent some time with it, though, Jaxon’s painting did suggest a thematic trope that Crane chose to pursue in his own work. It’s to his credit that he continues to attribute ideas that he came up with to the student whose work may well have inspired him, but which he could almost certainly have claimed as his own. It appears he read the relatively blank, yellow face of the portrait as a mask, a timely but also timeless metaphor, and responded by producing several elaborate and experimental portraits which he then covered with fields of color that mask them, through which they are viewed. As it so often the case, a viewer may wonder why Crane credits his student for such a simple idea, with which he has done so much and made such great departures. But most ideas look simple once someone has had them, and Crane is to be commended for insisting on acknowledging Jaxon Bogart’s dual gifts: the original portrait and the ideas it inspired. 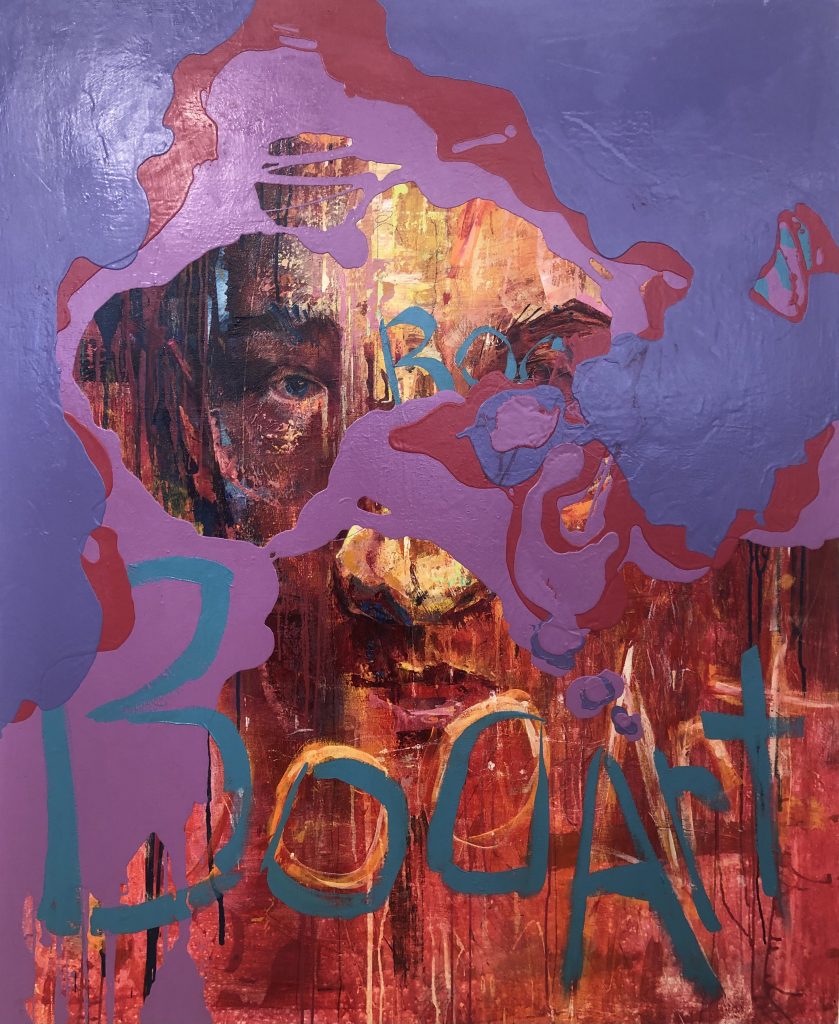 A portrait that explores a theme by Jaxon Bogart

Something further needs to be said about collaborations in which one side hasn’t approved them in advance. One of Crane’s students, Brooke Urie, came to the opening with her family and positively basked in the attention she received. So far as is known, none of the students has protested being adopted as a partner by their teacher, who in any event has not only given them credit, but insists that should any of the works sell, the student is to receive all the money in addition to half the credit. As was said at the beginning, in collaboration the conventional notions of a creators’ unique rights are sacrificed by both parties. It seems undeniable that Chad Crane has made the kind of extra effort that good teachers make from time to time to make sure these student’s enjoy some of the rewards that so many of their peers can usually take for granted. It’s hard to imagine how any of them would begrudge him the other half of the prestige. 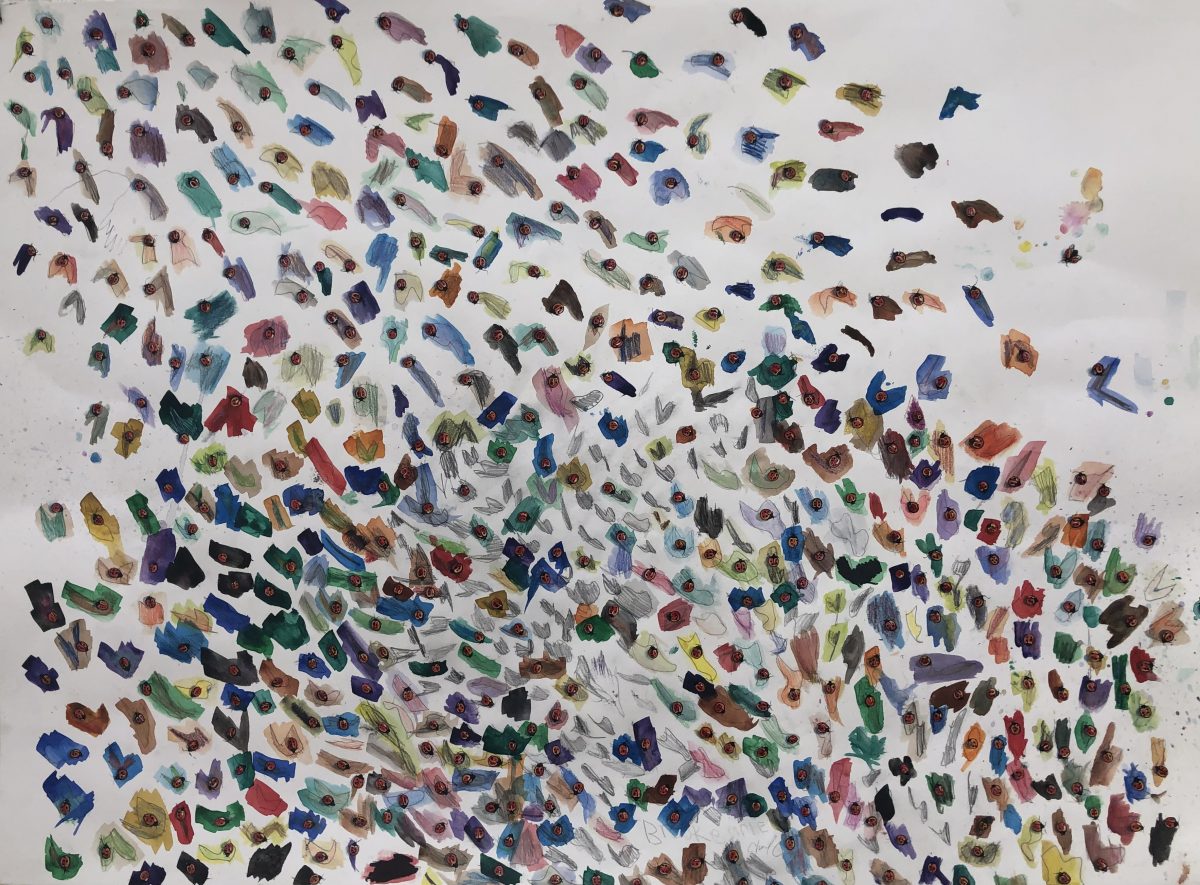