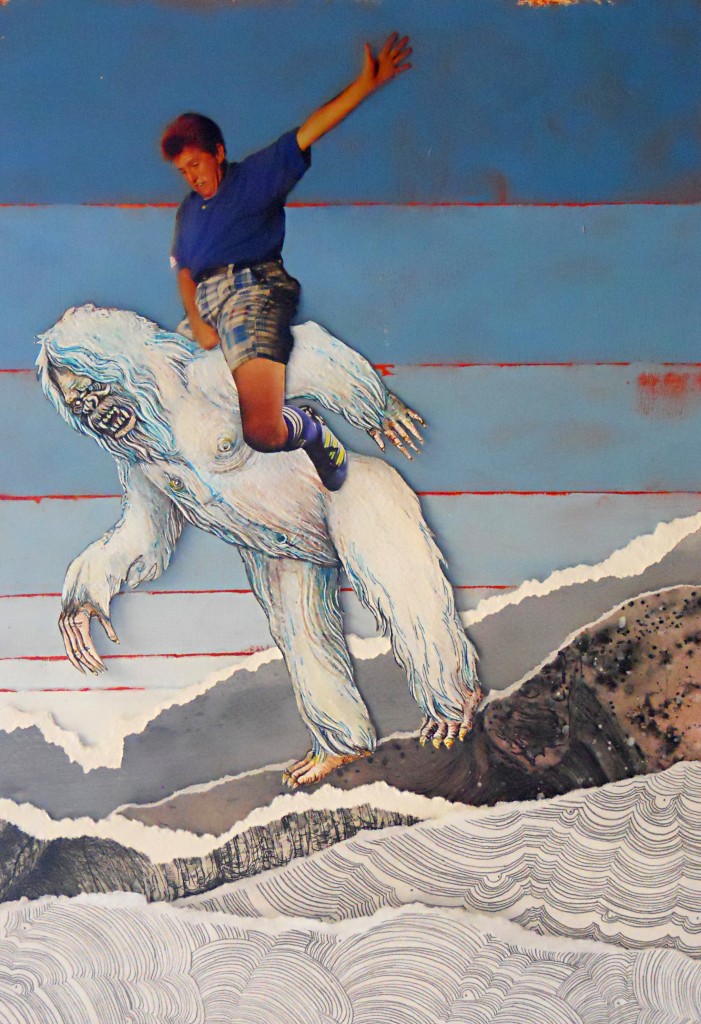 “Local school teacher slumps into depression one Sunday night in January, so he calls up former roommate and confidant, Abominable Snowman, and together they romp through a winter wonderland until both collapse laughing and crying in the snow” 16 x 20″ mixed layers of drawing and painting cutouts

We sat down yesterday with Chad Crane, one of the few artists involved in the 35×35 exhibit we had yet to interview for our associated video project (come to the Awards Reception at Finch Lane Friday the 19th and you’ll see what we’re talking about). If you’ve been to the show, you may remember Crane’s collage pieces starring “Werewolf” in a series of uncomfortable situations. They are a few in a new body of work that use monsters like Abominable Snowman and the Loch Ness Monster, to riff on the artists own situation as father, teacher and struggling artist.

Apart from the iconic monster figures, the works can also be identified by their long titles. Words, for Crane, are a passion equal to that of images and in these latest works he says , “The titles are just poems. Half the reason I’m making the pieces now is I thought of the title.”

His poetic output this year doesn’t end with his visual output. At the beginning of the year, Crane set a goal for himself to write a haiku everyday, and he says he’s stuck to it. Two other writers have joined him in the effort and every Sunday they mail each other the week’s batch and chat about them.

We though it appropriate, then, to ask him to send us a few of his haikus for our own Sunday chat.

rubber gloves made for dishes—

and scared surrender with hands

up in the cold air

over my shoulder calling

me by middle name

Chad Crane’s works are part of Artists of Utah’s 35×35 exhibit at Salt Lake’s Finch Lane Gallery (54 Finch Lane Rd). The exhibit is up though April 26. He will be exhibiting in July at Salt Lake’s Kayo Gallery. You can see more of his work in our Artist Directory and at chadcrane.blogspot.com