As the Salt Lake City’s Main Library moves to its new building this weekend, it makes way for a number of new tenants, including the Center For Documentary Arts. The Center began 20 years ago as the Oral History Institute — an effort to document the many ethnic and cultural communities of Utah. Before organizers had emersed themselves very far into the project, they realized that mere sound recordings were missing a big part of the cultural picture — the visual richness that identifies each culture and weaves itself around all of us. The project clearly needed expansion. The evolution of that original organization produced the Center For Documentary Arts (CDA), Salt Lake City.

“Art attempts to make visible the invisible, so people can see, feel, understand it,” says Kent Miles, cofounder of the original institute . 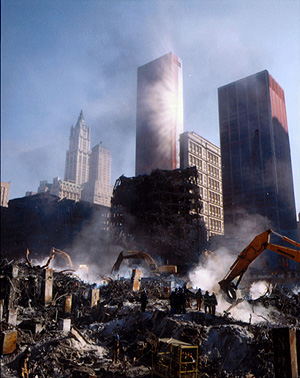 “It is a revelation of spiritual/social realities; of making those visible. It performs a personal aesthetic function. Art in society is a social function. The act of documenting a society is so intimate it doesn’t always connect to the wider audience.”

from Ater September 11th: Images of Ground Zero, by Joel MeyerowitzMiles says it is also the most approachable of art forms. There is nothing to interpret, nothing hidden. What you see is all there is — simple, unmasked living; taking what is previously unknown to people and giving them permission to explore it.

“It gives significance and meaning to the world as people ‘pass’ through it,” he says. “It deals with a subject that is less ‘high falutin’ and relates to its audience as ‘art’ that is part of life.”

Documentary art is defined as auditory or visual capturings of unscripted life. It is achieved through audio tape recordings, film/video, photography and writing in a journal form. It is one of the most intimate art forms to produce and quite often feels a little like trespassing to both the producer and the viewer. The art can cover topics from domestic violence or homelessness to tracking the development of a fetus. It can be captured in a third-world country or in our own back yard and may take from a few days to several years to record and edit a single project.

“Where fiction explores reality,” says Miles, “documentary art takes real events, like the holocaust, and follows those to interpret life.”

The detailed recordings of photo/film documentarians and of writer/editors become the coupling of the “outer reality” captured by the camera, and the “inner reality” exposed by words/edits, a marriage of two very social activities. The audience viewing the project brings their own interpretation of what they are viewing, further socializing the experience.

While documentary art is not traditionally shown in commercial theaters and galleries, it is a regarded as a nouveau art form that is catching on like wildfire. Hotels, government buildings and universities are scrambling to host traveling exhibitions. Film festivals around the world are dedicating more space to screenings and panel discussions on the art. Corporations are recognizing it as a valuable economic tool and are funding permanent spaces to house and showcase these works.

And Salt Lake’s CDA is at the forefront of the local scene.

CDA is a nonprofit organization acting as a resource for both artists and exhibitors. It is comprised of a handful of full and part-time staffers as well as docents and volunteers. 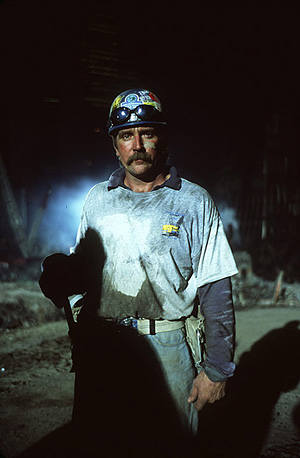 The center has produced numerous books including, “The Other Utahns,” featuring the Jewish, Latino, Ute, Italian, Greek, Chinese and African American communities throughout the state. “Sacred Images” took a closer look at Native Americans and the traditions that form the beauty of their culture. And “One Hundred Fifty Years of Diversity,” was a sesquicentennial look at the evolution of Utah’s cultural fabric.

In addition to books, CDA has also hosted world-class physical exhibitions at the University of Utah, the City and County Building and even the 2002 Olympic Winter Games.

They will “take on space” at the old Main Library in downtown Salt Lake, becoming part of the core of the Community and Culture Center of the valley. Ten thousand square feet, two galleries and a black box theater will showcase the best documentary work of local and international artists — physical exhibitions and film screenings of myriad cultures and topics. The space will also offer resources for documentary artists, such as obtaining grants and financing for projects, mentoring sessions and casual monthly gatherings where artists can discuss their work and get feedback on projects.

“It’s just a matter of patience,” Miles says. “We have to wait for the library to move into its new quarters before we can take up our new residence.” Until then, it’s business as usual, in their current facility at 353 East 400 South in SLC

The oral histories that were the springboard for CDA two decades ago are still a huge part of the work they craft. The format has just expanded as well as the interest in this fascinating new art.

With a family, a full-time journalism career and an inclination to volunteer, Jan Hopkins stays plenty busy. She writes for the Davis County Clipper and the Utah Spirit Magazine, as well as doing other freelance projects. 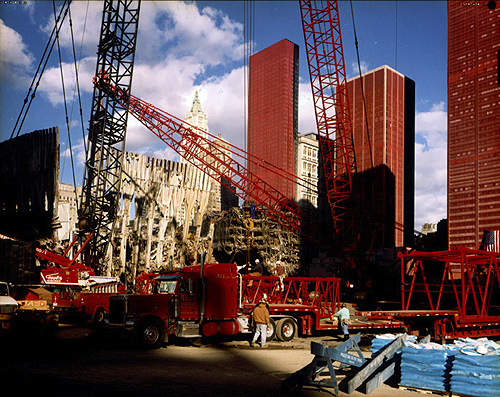 This article originally appeared in the February  2003 edition of 15 Bytes.
The images included with this article come from the exhibit “After September 11th: Images of Ground Zero” running currently on the first floor of the City and County Building.  Sponsored by the Center for Documentary Arts, Mayor Rocky Anderson and the Salt Lake City Council, the exhibit features 24 color images of “Ground Zero” taken by internationally celebrated photographer Joel Meyerowitz and a 16 minute video featuring an exclusive “Nightline” inteview with the artist. The exhibit runs through March 15. To view a Press release in Adobe Reader click here.After the tragedy of September 11, Meyerowitz became the only photographer allowed full access to the “Ground Zero” site in order to document the clean up. His dramatic photographs (covering the full extent of the nine month effort) coupled with text and } the short video highlight Meyerowitz’s multi-faceted response to the site and to the people involved in the cleanup.

Tagged as: Center for Documentary Arts