Centennial Valley & Getting the Most Out of Artist Workshops 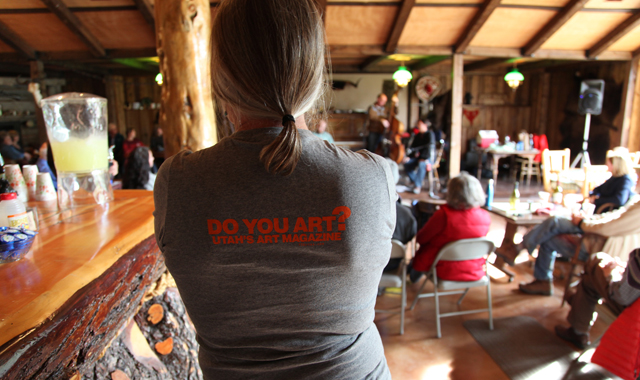 During the Centennial Valley Arts Celebration, an event co-sponsored by 15 Bytes, a number of Utah artists braved an early winter storm to explore southern Montana’s Centennial Valley.|2|The Arts Celebration occurs the last weekend of September at the University of Utah’s Environmental Humanities Education Center (EHEC),|3| which during the summer months holds a number of University of Utah classes and workshops for its students. At the end of the season artists of all sorts are invited to descend on the region to stretch their creativity in a unique natural setting.

Our regular Hints & Tips columnist John Hughes was on-hand as a workshop instructor, providing artists who have read his column for years the opportunity to try out his hints and tips under his direct tutelage.|4|

“The weather was unpredictable and the week didn’t go without it’s challenges,” Hughes says of the time in Centennial Valley. “The old saying ‘You have to be tough to be a plein air painter’ was what we lived by out in the field. The mornings would start out around freezing and on the second morning we even had a howling wind coupled with snow flurries. My usual solutions to situations like this are simple: dress in layers and occasionally duck down behind the car or any other windbreak such as a convenient hill or large tree. A pair of cotton gardening gloves along with a couple of hand warmers for your pockets and you’re off and running.”

“The biggest lesson I learned, was if you’re going to paint, paint near John Hughes,” quipped Bill Fulton |5| during one of the Art Celebration’s nightly show-and-tell/critique sessions. Hughes was careful to ask permission first and to tread lightly across his students’ canvases, but he was always willing to intervene directly on their works in progress. Intervention of that sort can be unsettling, but all the students commented on how useful it was to see the actual stroke or change in color the teacher was telling them about.|6|

“I think it’s best for the students to try and paint like the teacher for the allotted time to get the most out of the class,” Hughes says about approaching plein air workshops. “In other words, immerse yourself in the instructors world for awhile to fully comprehend what they have to offer. Yes, this may seem very awkward, but the idea is to take in the new information during your journey with this teacher. Work like crazy to get inside their brain, assimilate everything you like and then leave the rest after you have had time to think about what works for you and what doesn’t. This takes courage because you are outside your comfort zone and you will most likely paint worse than you normally do during the class, but what you gain in the long run is worth it!”

“I really thought I wouldn’t like someone painting on my canvas,” says Merritt Stites, another workshop participant. “But John knew the right dosage of intervention.|7| How much to step in and when to stay out.” Stites was also not afraid to disagree. At one point, she says, she wiped out one of the strokes Hughes had made. And when he came back later he remarked she was right to do it.

“The truth is, many times the things you learn from a workshop won’t even begin to show up in your own work for a few months,” Hughes says. “The artist needs a chance to assimilate the information and make it uniquely theirs. This may sound contradictory, but the worst thing you can do is to try to be a clone of the instructor. Once you are outside the class, paint the way you are used to. Yes, play that game during the class, but don’t stay there forever. You will always be you and the teacher you are learning from will always be who they are; you have to fight for your own voice!”

Hughes began the workshop with a Thursday-evening power-point presentation discussing the fundamentals of art, including his 5 + 1 method (see the article here). This beginning was expanded with two days of work in the field, where each student picked up new techniques. “I used to just mix a gray and put it on the canvas, but I learned how you can tweak the grays with warm or cold, depending on what the canvas needs,” Fulton says of his learning experience. “I thought it was interesting how John worked all over the canvas at one time,” Stites says. “He put the aspen trees on first thing, while I would have waited. Then he developed them as he worked on the rest of the canvas.”

With occasional snowfall, swift moving clouds and gusting winds, the artists had dramatic and frequently changing weather to test their skills. “The landscape was gorgeous,” Stites says, “the best combinations of cold blues and grays with warm yellows, purples and rose.”

Some artists opted to explore the landscape on their own rather than participate in the structured workshop. Paul Trentelman added a stay in Centennial Valley to the tail end of a longer trip through Montana. It was the first time the figurative painter from Ogden had painted a landscape. “Unless I’m painting a live person sitting in front of me, I usually have lots of time to paint and make sure I get the color mixes and values right.
Outside I did not have that opportunity. Does anyone know how to make time stand still for a few hours? Those pesky clouds and the changing sunlight made me realize very quickly that I had to paint, well, very quickly.”|8| His first painting took about three hours, he says.|9| “I can’t think of any other way to teach yourself how to capture the feel of the outdoors other than being there. Painting from photographs doesn’t really do it because the photographs have a very limited value structure – our eyes can detect much more subtlety in color and value than film and especially digital cameras, where color value is compressed.”

The newly dedicated Francis H. Zimbeaux Art Center on the EHEC campus served as a studio for those uninterested in braving the cold temperatures. Bill Reed, who will be exhibiting his large-scale acrylic paintings this month at Sugar Space East, completed “Cool and Windy,” a diptych, while he was there.|10| As he scraped and pounded his colors onto the canvas, Shawn Rossiter also directed a collage workshop inside the cabin.

On Saturday night, The Cottonwood Club,|11| a String Jazz quartet from Helena, Montana that features Victor Daniel |12|(one of the EHEC’s 2013 Artists in Residence) on mandolin, filled the EHEC’s Red Rock Saloon with its hot and cool jazz sounds. It got the artists dancing enough to warm themselves up from three days out in the chilly field.

15 Bytes is a proud sponsor of The Centennial Valley Arts Celebration, which occurs the last weekend of September. For more information on the EHEC, visit their website.