Yesterday the Senate passed the American Recovery and Reinvestment Act with a vote of 61 to 37. As the bill heads to Congressional conference, $50 million in recovery funds to be distributed by the National Endowment for the Arts hang in the balance. Unlike the Senate bill, which […]

Recently, Americans have become upset with economic recovery funds going to rather dubious ends, like, say bonuses to the bank execs who helped cause the whole problem. Not to worry, Congress (who also helped cause the problem) is on top of things. Earlier this week Senator Tom Coburn […]

Last week the Salt Lake Tribune’s Julie Checkoway broke the story about the two presidential candidates platforms regarding the arts. As Checkoway reports, "artists and art-related nonprofits generate about $166.2 billion in revenue per year and $12.6 billion in annual taxes." Obama has for a long time hadhe […]

Back on May 12, we made a post about the Orphaned Works Bill. Here’s an interesting YouTube post (it’s really an audio file rather than a video) about the subject: http://www.youtube.com/watch?v=CqBZd0cP5Yc If you want to communicate with your elected officials about this bill go to: http://capwiz.com/illustratorspartnership/home/  15 BytesUTAH’S […] 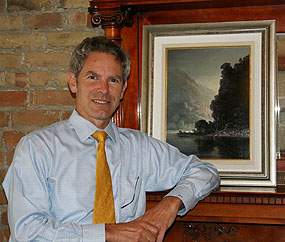 Mayor Becker’s Vision for the Arts

In our September 2007 edition, we learned that (then mayoral candidate) Ralph Becker is a fan of Jim Jones and H.L.A. Culmer and that he believes “we need to be continually promoting the great Utah art we have;” now, thanks to the Utah Cultural Alliance’s May Culture Bytes, the […]

Can Someone Steal Your Orphaned Artworks?

Artist Bepe Kafka was kind enough to send this our way: The Orphan Works Act of 2008 is now being considered in the U.S. Congress. "Orphan Works" are   any copyrighted work whose author any infringer says he is unable to locate with what the infringer himself decides has […]

Steve Sheffield on Artists and Auctions

At the Utah Cultural Alliance’s April Culture Bytes, a panel of fundraising experts from the community discussed Successful Silent Auctions and Planning Ettiquette. Local artist Steve Sheffield, who has served on the boards of Art Access and Community Nursing Services (Art & Soup) and helped with their fundraising […]

More Activity on the Hill