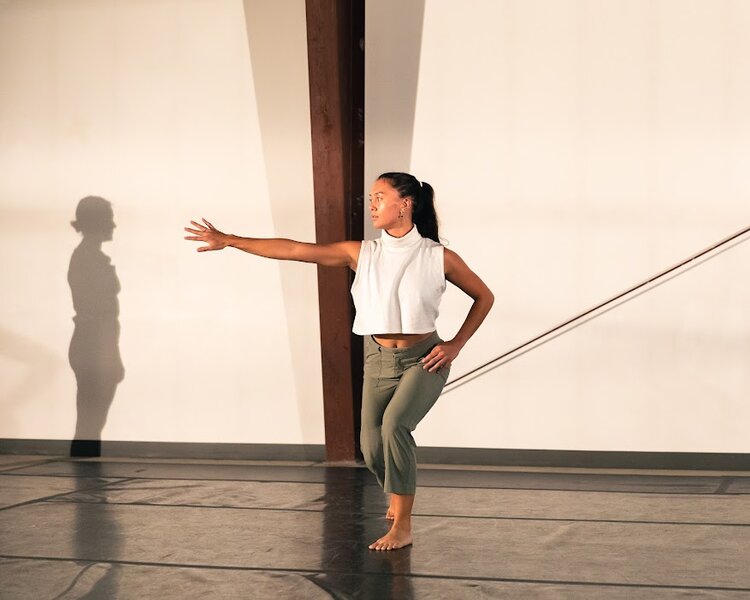 Last Saturday evening, Cat + Fish Dances showcased a night of calm strength despite the abrupt storm outside. Held in the quiet space of the Missio Dei Church, the concert was a traditional, black box-style dance performance of three works-in-progress. After a run across the parking lot through the downpour of a thunderstorm, the quiet hum of the audience was warm and welcoming. To open the night, Cat Kamrath and Daniel Do shared with the audience some of their goals and values as a company, including providing the artists with fair compensation and acknowledging the Indigenous peoples who came before us. The directors also expressed that, as they are all people of color, it’s important that the company work alongside others in the fight against racism in both the Salt Lake City community and beyond. In alignment with this goal, they planned to give a portion of the funds raised to Melanin Squad, an organization committed to providing opportunities and resources for women of color in business.

The program opened with a trio titled “Recount,” choreographed by assistant director Daniel Do. The dancers started with a walking pattern and took turns featuring each dancer performing a personalized gesture-based phrase. Those phrases combined spatially and rhythmically to become foundations for the rest of the work. As the performers layered their phrases on top of each other and blended their solos, the piano music intensified to match the dancers’ pace of rising tension and strength. Suddenly, the dancers huddled in a tight triangle and performed their phrase work with a new sharpness and repetition until it came to a surprising end that left me wanting more.

The show moved on to “A Study,” the second work in progress by choreographer and project director Mar Undag. This was an ensemble piece featuring five dancers. The dance followed the theme of strength and began with a steady, composed duet. I found myself intrigued by the subtle hand gestures that would return as a motif throughout the dance. The immediate hook was established by a static trio, standing to the side and staring back at the audience as if waiting quietly to begin. As the duet came to a calm resolution, the trio took over with their heart-thumping beat. The dance reveled in the spiraling movements of the dancers, the costumes and even the loose hair of the performers. They moved through the space with each other, creating light moments of duets, trios, and solos. The dancers found a moment of stillness and unison as the music shifted. The storm could be heard pounding on the roof while the dancers quietly lived in a slow gestural moment. The work found a final exhale in an emphatic solo.

The show closed with another trio choreographed by the artistic director Cat Kamrath, “Gathering I.” This was a tremendous feat of lifting and falling, and continued the exploration of calmness, strength, and flowing circular movements. Kamrath said that some of the choreographic process was based on sensations in relation to the self, such as the feeling of stretching skin. The dancers began with a simple rhythm of posed geometric shapes. The dance’s rising action grew exponentially as the performers began sharing weight and lifting one another. The piece transitioned to a duet of stunning physical partnering. I was most impressed and inspired by one of the performers who was at least a foot shorter than the others, of a lean build, yet lifting and falling with just as much control and care as the others. It was so exciting to watch truly genderless choreography, as well as nostalgic to see technical movement executed so well. In some moments the partnering was tender, other times it was purely functional, and it was always breathtaking. The dance shifted as a lo-fi beat came on, which contrasted the previous works of piano and ambient sound. With this shift the dance ended on a climax as one of the dancers boiled in a whirlpool of movements that threw them around the space, then stood and slowly motioned to cover their eyes.

Overall, Cat + Fish Dances delivered an evening that offered themes of finding new in the old and exploring the steadiness of strength. The show was also a way for the whole company to process togetherness again. When I asked the choreographers what dancing with others was like after such a long time of contactless art making, they all expressed a desire to re-learn what togetherness meant for them as individuals and a group. Mar Undag elaborated: “It has been an immense gift to not only create art with these talented and deeply passionate humans, but also to reach outside of ourselves and be able to provide substantive support to others around us as well.” The night was a breath of fresh air for many as the audience buzzed with comments that this was many folks’  first dance performance since the beginning of Covid. It was refreshing to see such virtuosic movement in a space with a history of bringing communities together.