Cassandra Barney explores the complexities of human emotion, longing and loss, suffering and acceptance that accompany those rare moments that steal into each of our lives.

For some time now I’ve been thinking about something that, in the privacy of my mind, I call “the Utah School.” This assortment of local artists—their precise number varies—display common concerns and make similar choices in their works: sufficiently so that a curious critic might look for some shared influence beyond the obvious. Unlike the Cubists, but like the Impressionists and Fauves, these artists have in no way unilaterally identified themselves as sharing particular tastes or strategies. They remain, so far, a phenomenon that primarily exists only in a critic’s eyes. So when rumors of collaboration between two of the primary candidates for Utah School membership—Cassandra Barney and Brian Kershisnik—reached my ears, they pricked up. On the one hand, this could be the first signs of something emerging. On the other hand, it could be just two artists who know each other’s work and are looking for a new outlet; art, after all, is also a business. I felt I needed to get over to the Kayo Gallery’s new space (next door to their old digs near the corner of East Second and Broadway), where Drawing Together, twenty-five of their collaborative, mixed-media drawings, is on display through August 11. The title alone is provocative: it could be a literal description of what took place, or it could be a gentle pun. Either way, it opens possibilities for the future . . . 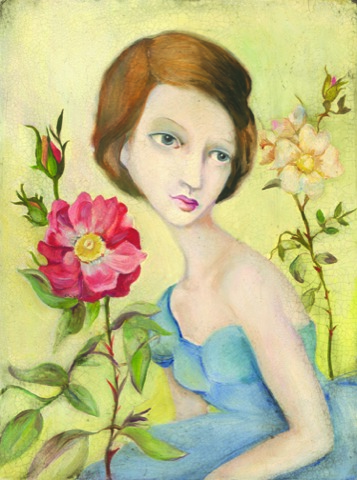