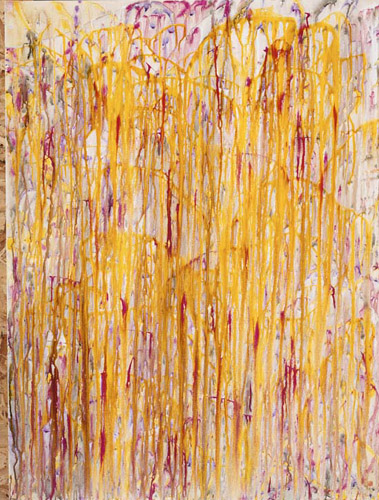 In the new show of paintings by Cary Griffiths to be exhibited at Palmers Gallery this month, viewers will find themselves confronted with works that may seem familiar — appropriations building upon twentieth-century painters from the New York school such as Pollock, Louis, Frankenthaller, Rothko, and Motherwell. Yet decidedly these are creations of the twenty first century and there may be more to these images than mere appropriation and technique.

The abstractionists of the last century worked primarily with a specific directive in mind — new objective developments in art with the aim of art for art sake in mind. Griffiths’ work is highly reminiscent of these artists and the comparisons to Pollock in many of Griffiths’ painting cannot be denied, yet his is a post-modern revisitation of old themes in very contemporary ways.

One aspect by which this is immediately apparent in Griffiths’ work is his use and application of color. He has developed a technique using pigments intended for glass which he applies to a wetted canvas. He also uses the drip techniques of Pollock and other experimental methods to achieve his aims. The outcome mimics twentieth-century Modernism, yet the result is distinctive and unique. “Blues in Sunrise” emulates the Frankenthaller technique of using color washes, though Griffiths’ result is a more opaque and fluid canvas. The difference is his material results in a harmony of color combinations with striking results. Each piece has a distinct character and effect. The colors blend together, retaining the original pigment while creating a mesmerizing fluidity of intermediary hues. “Eddy,” one of Griffiths’ most vibrant pieces, uses a broad color palette focusing on vivid reds, oranges, and yellows, and fully reveals the artist’s unique quality of allowing the pigments to flow together creating an unlimited range of hues. “Flowing Space and Time” is a reminder of a Louis, though its color gradations separate it from Louis’ canvases. Louis experimented with color washes in broad bands but Griffiths’ bands merge and grow together to create an amazing range of ethereal colors. While Jackson Pollock is the stongest influence apparent in this body of work, Griffiths uses a color palette foreign to Pollock. “Sojourn” is a wonderfully unified ménage of cool colors- greens and blues, which through the use of mediums allows for interplay of many gradations of color to emerge as Griffiths’ limited pigments blend.

How are Griffiths’ experiments, revisiting old twentieth century artists, any different than the aims of his predecessors? How are these works original and not merely extensions of the old? “Eddy” is a Kandinskyesque panel, similar in color and vibrancy to the others mentioned. Griffiths describes, while creating this piece, experiencing a musical sensation, an almost symbolic synthesis of color and abstract sound to create this panel. To many of his other canvases he ascribes other sensations. Such is where the real distinction between his work and that of the artists of the last century begins.

Griffiths paints of the moment: what he thinks, feels, sees, experiences, remembers. He likes to paint what he senses and even sounds in his mind. Griffiths’ motivation towards his canvases are born from these thoughts, recalled experiences, etc., But more importantly is the hope that the viewer will be engaged in a moment, a visitation of his work, which is equally subjective and equally as personal to the viewer as Griffiths’ own experiences. The paintings, according to the artist, are mediums, beings in of themselves. The work, opposed to twentieth century objectivity, is an appropriation into post-modern subjectivity. 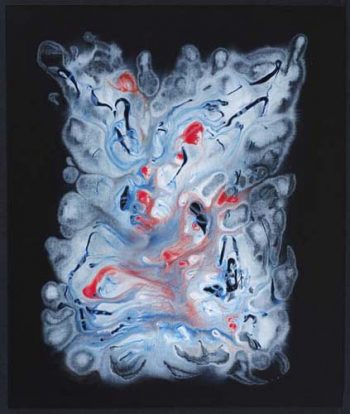 “Illusion,” is an example of the ideology behind most of Griffiths’ work. A black canvas with a wash of white and pigments of blues and greens, the painting is reminiscent of Rothko, who enjoyed the purity of his panels and the impact but also invited the viewer to meditate upon them. The conceptualism of Rothko is solid ground for what may be the ideology behind the majority of the works of Griffiths. What the artist renders and what the viewer responds to are two very different things and this is Griffiths’ aim. The art is the vehicle between the two. The emotive aspect of artist and viewer are as important as the substance of the work. The experience of the viewer is essential in the full realization of Griffiths’ art.

Much of the quality of Griffiths’ techniques invites this, such as his choice of pigment and color, or colors which are literally invented on the canvas as the hues blend and merge with one another. One may get lost in the labyrinth of color, which, as Griffiths has stated, has qualities of its own, as was the thinking of Kandinsky. The effect is one that invites contemplation and admiration. Although Griffiths’ paintings have a vast range of techniques, they are unified in their primary aim at an emotive connection, via the art, between viewer and artist.

Visually the works are highly striking, something that if seen at a distance one would stop one and encourage a closer look. And with this closer look one is drawn into the work, where one may loose one’s self in these compositions, the emotive colors, the patters, and the fluidity as forms emerge. But most importantly one may find their own person feelings, meanings, experiences, memories, etc, in Griffiths’ canvases. This is something Griffiths hopes will impact the viewer as they encounter his painting; a creation that is the bridge between the artist and viewer, an organic being able to transmit ideas and allow for the viewer’s own revelations. These works are post-modern traditionalism, a new approach to traditional Modernism. These paintings are not only engaging, but they are fun too! And the more one looks the more engaging they become.

“Send in the Clowns”