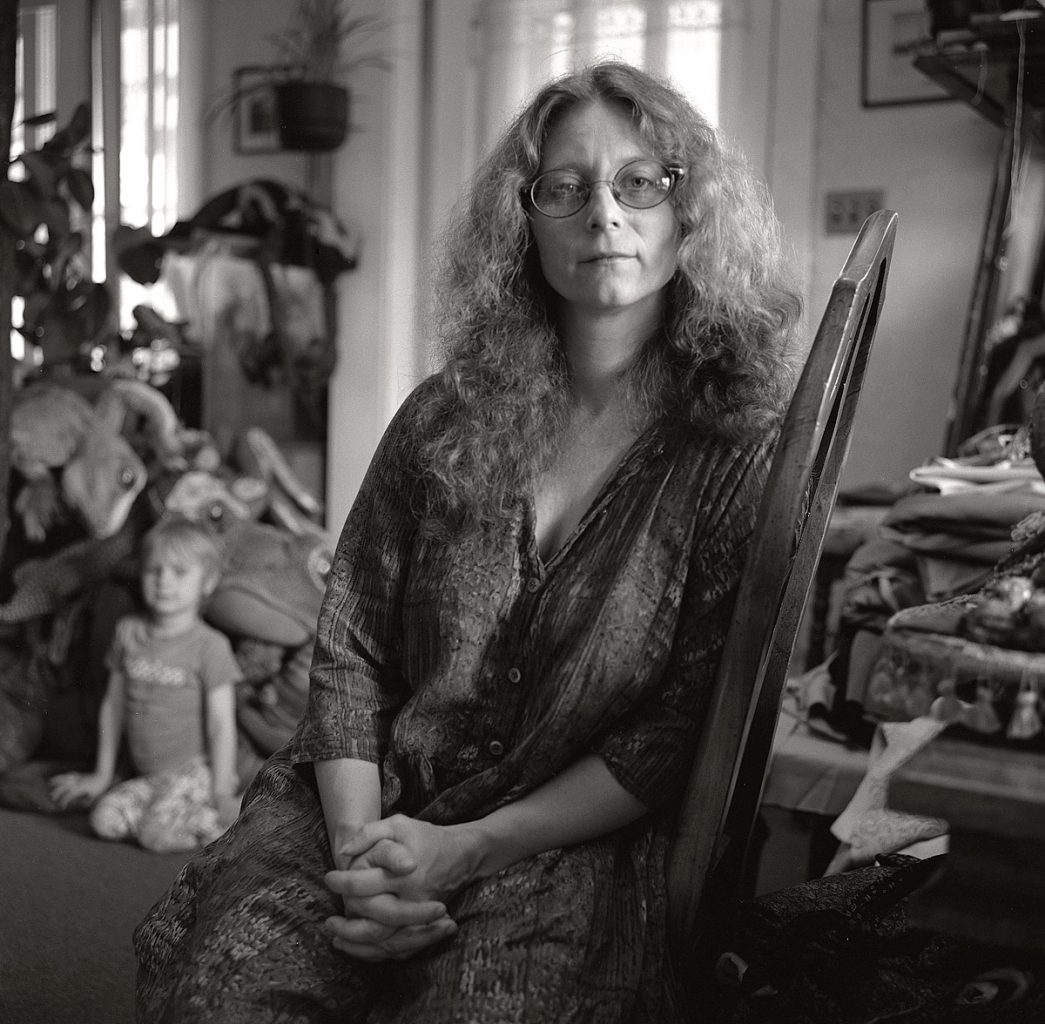 It turns out that it’s pretty hard to get into prison if you don’t commit a crime and you want to take a pen and pad of paper with you. After of month of bureaucratic phone calls, background checks and a letter to the warden’s office, these are the magic words that finally got me admitted:

Please allow Sheryl Gillilan clearance into the Timpanogos Visiting Room for an interview with inmate Carole Alden #180047 on April 20, 2010 at 0900 hours. The visit will last for 1 hour and be supervised by Sgt. Travis Knorr. Ms. Gillilan will be allowed to bring a notepad and pen to document the interview.
– Steve Turley, Draper Warden

Clad in maroon scrubs with INMATE blazoned on her pants leg in white block letters, Carole looks like any other inmate except her scrubs are festooned with multi-colored paint splatters. She apologizes for her appearance, but is appreciative of the brightly colored sweater I wore for her benefit. “Wow, that’s sensory overload,” she laughs as she shields her eyes. “We don’t see that much color around here.”

It is clear in talking with Carole that she has always been an artist. As a kid she sneaked behind her house to dig clay out of the hillside so she could make pots. She also carved knives out of deer antlers and sculpted objects that were so sophisticated her kindergarten teacher couldn’t believe she’d made them herself and begged Carole’s mother to quit helping with her daughter’s art projects.

Over the years Carole taught herself to work with bronze and porcelain but switched to fabric when she wanted a safer working environment around her children. One of her specialties was creating elaborate Victorian wedding gowns commissioned by clients around the country. The prospective bride would meet with Carole to talk about the general design idea, and then Carole would clothe her in black garbage bags that were tightly duct taped to her body. After carefully slitting the taped concoction with scissors, Carole would remove the form, tape it back together, insert a broomstick up the center, and place the stick in an old Christmas tree stand. And thus, a true-to-form mannequin was created for Carole to fashion a one-of-a-kind gown. 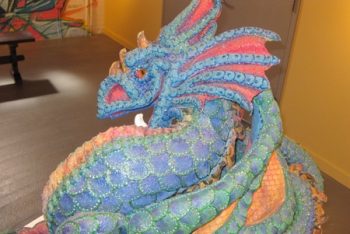 After one of her kids whacked a hole in a wedding dress due for delivery the next day, Carole decided she needed to switch to less stressful creations. She then embarked on a series of animal sculptures created from “the most hideous polyester leisure suits that I could find.” She would cut them up, sew the pieces back together with a thick upholstery needle, and then finish them off with loads of fabric paint and an airbrush. “Those sculptures are bomb proof,” she laughs, “and I like taking ugly clothing and turning it into something useful.”

Carole has a unique ability to fashion 3-D creations entirely in her head. “I think it’s a wasted step to draw something first,” she says. “I think three dimensionally. It’s like I have an AutoCAD system in my brain.” These skills served her well as she went on to create unique dolls and other sculptures. For example, in 2006, after teaching herself to weld, Carole created a 90 foot-long dragon with 2,000 feet of steel and gossamer fabric wings that undulated in the Salt Lake Library’s reflective pool during the Utah Arts Festival that summer. The dragon was test-sailed in the Great Salt Lake and had an 18-foot tail and 20-foot wings, and used 3,000 yards of thread to stitch all the fabric. 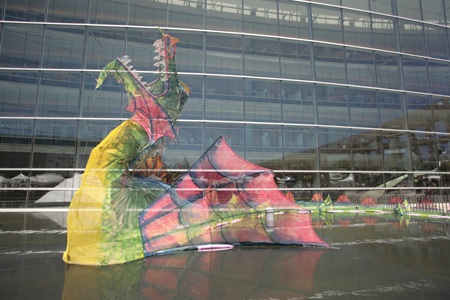 And then Carole’s life imploded in a domestic violence incident that landed her in the Millard County Jail. Traumatized and suicidal, she drew a picture of a naked woman skewered on cell bars, watching her children disappear into the distance. Later Carole recreated the drawing with felt, embroidery thread, pencils and an illicit sewing needle.| When I ask how she got access to the needle, Carole smiles and says, “Well, there’s always a way around everything. The guys in State custody [at the jail] could have needles, so I would draw them soft-core 50’s style porn and they would send me over some needles tucked inside the mop bucket.” 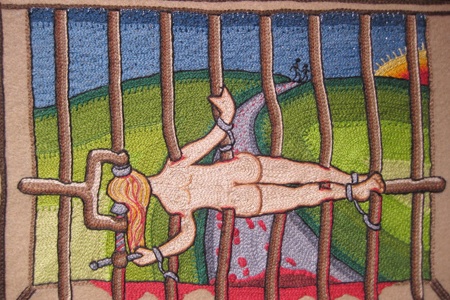 Carole also created “The Raven Lady” while in jail. She says the image came to her in a vision six months before her fiancé took his life, and represents the challenges of flying blind with bound legs. “The image is hopeful, though, because despite the limitations in her life, she’s still trying to fly.” 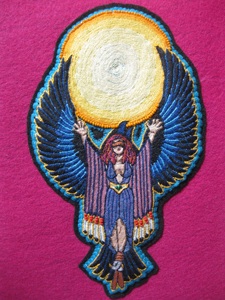 Now at the State prison with an indeterminate sentence of 1-15 years, Carole has access to only marginally better art materials: sewing needles (but no fabric), crochet hooks, yarn, paint brushes, “crappy acrylic paint in not enough colors,” drawing paper, black Bic pens and eight colors of pencils. But she uses them all. She churns out drawings at a furious rate and keeps them in a 3’ x 3 1/2’ box in her cell. She’s also painted some murals on cinder block walls at the prison, which explains the Jackson Pollock touches on her uniform. “It’s really challenging to create art here,” she laments. “The environment is oppressive and it’s not like I can ask for a north-facing cell to get the good light.”

For longer term art projects, inmates have to secure a “property contract” that allows them to keep the necessary supplies in their boxes, but even that doesn’t protect them when the SWAT teams come through and clear out everyone’s cells after an inmate has transgressed. Carole says, “The first time that happened I about had a nervous breakdown. Those art supplies and drawings are my soul. But at this point I’ve gotten used to the possibility of everything being taken away.” The only way Carole’s finished art pieces escape this fate is the requirement that they be shipped out or picked up by an approved visitor within 30 days.

Because sculpture is still her first love and inmates are not allowed “stuffing material” of any kind for soft sculptures, Carole looks forward to winter snowstorms when she can go outside, shovel all the snow onto the basketball court and begin creating. Snowmen are prohibited (someone might hide behind them or use them as decoys), but one year Carole created a 70-foot dragon, making sure to keep its profile low to the ground so the guards wouldn’t prohibit it. Then her fellow inmates got into the act by saving their juice drinks and pouring them over the dragon to add some color. Carole also created a snow sea monster one year with prison uniforms stuffed in its mouth. “The guards didn’t think that was very funny,” she laughs, “but we sure did.”

Carole also finds a creative outlet in crocheting wild and crazy hats for her kids, including a godzilla head and a devil with flaming horns. Other inmates frequently want her to crochet hats for them, too, but Carole is adamant that she’ll only make them for “people who came out of my womb.”| She says, “People feel entitled here, like they can just ask to have something. I’m only willing to put that much energy and time into something for people I love, and I don’t love anyone here.” 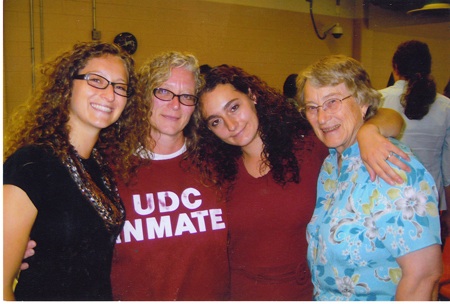 Carole currently has a property contract to create a 7’ x 9’ version of her impaled woman, entirely constructed from individual pieces of crochet layered upon one another. She also has plans to create multiple pieces of art based on her prison drawings when she is released. Expecting her to lust after currently forbidden art supplies, I am surprised when Carole says, “I want to take the materials we’re restricted to here and make something really amazing out of them. I want to do pieces that really show the complexities of drug abuse, poverty and domestic violence that shape women’s lives. Much of it will be disturbing for people to view, but I think it’s an important message to communicate on a visceral level. Only then will some people grasp the terror and despondency that pervades so many lives in secret.”

And with that our interview is over, extended half an hour by the accommodating Sgt. Knorr. Carole is ordered to stay behind in the visiting room because they are doing a secure transfer of another prisoner. My driver’s license is returned and I am escorted out of the building through three sets of sliding steel doors and fences with spiraled razor wire. I grab a drink up the street at the Hard Times Café and drive away very lost in thought.