Though Valentine’s Day was a good excuse for running our special feature on artist couples in this month’s edition of 15 Bytes, the real drive behind the idea came from its author’s personal interest in how couples make a life together in art. When Carol Fulton met her husband Bill, who helped photograph the couples in the feature she wrote for us this month, their interest in art was relatively dormant: she owned a few works of art, and he had once gone through Betty Edwards’ Drawing on the Right Side of the Brain. Twenty-three years later, though, the couple says that art is the cement that holds their relationship together. 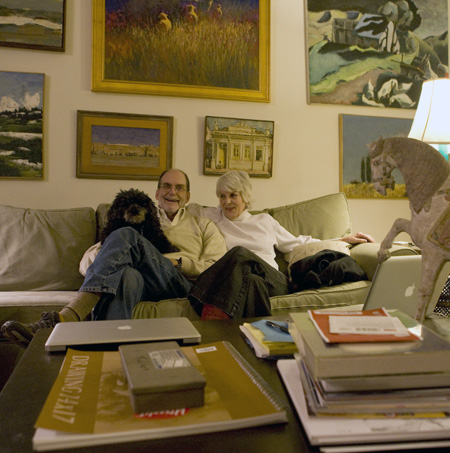 Carol grew up a foreign-service brat, moving around during her childhood, including a stint in Brazil. Her mother was a writer and having art in the home was a natural part of her upbringing. She worked for Delta and came to Utah from Boston as part of a transition team when Delta purchased Western Airlines in the late eighties She had planned to stay only a few years, but then she met Bill.

Bill grew up moving around as well, living his first decade in the East and the next in California, Arizona and Mexico. He joined the Army, where he studied Russian and was stationed in Germany. At forty he opted for a career change, earning a degree in social work and moving his family to Utah to work as a therapist. It was in a stress management class that he heard about Betty Edwards book, though he mistakenly thought it was simply about making use of the right hemisphere. After he opened the book and realized his mistake, he set about to disprove the author’s assertion – that anyone who can hold a pencil and write their name can learn how to draw – by going through all the exercises. And like many others who attempted the same he was surprised by the results. Working through a divorce distracted him, however, and his drawing experiments were put aside for nearly a decade.

When Bill and Carol met in 1988 neither was making art, but Carol, who had some artist friends, noticed that Bill was interested in the paintings she owned, and they began to frequent exhibits together, occasionally buying a piece. Bill, Carol says, got addicted. He went back to Edwards’ book, “following the exercises religiously, to the point that he got dizzy and nauseated when he did the contour drawing exercises.” He began going to life drawing sessions and took workshops from Paul Davis, Steve Songer, Randall Lake, Susan Gallacher, Willamarie Huelskamp, and John Poon. 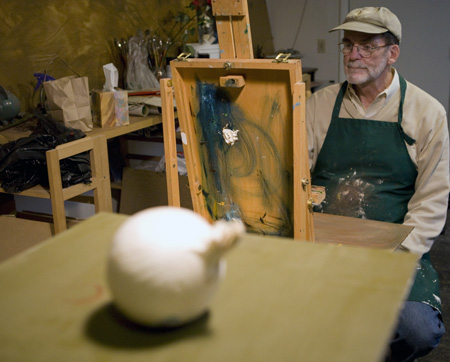 Carol says making art frightens her: “I tried reading Art and Fear at least twice, but it was too scary.” She has taken painting classes — from Chase Leslie, Susan Gallacher and Randall Lake — so when the couple is traveling, whether to visit friends in Torrey or their annual pilgrimage to Monhegan Island, she can paint alongside Bill; but her preferred medium is sculpture, mostly made with found objects. “I started collecting junk on my walks with the dogs – rusted metal, string, car parts that had dropped in the road, and finally sea glass and broken lobster traps and driftwood.” 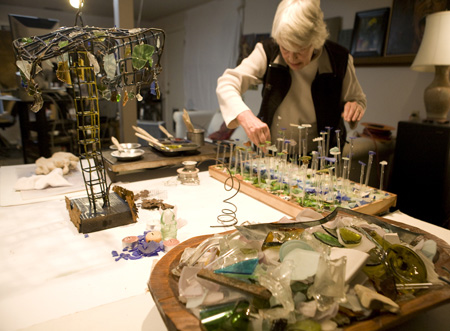 Looking back the couple says art has been a great unifier. They talk about it all the time, and look forward to playing in the basement studio, where jockeying for space still goes on. Art has also helped their social life. “It’s harder to develop friendships as a couple,” Carol says, and it was only after they became active in the art world that they felt their social life was complete. They were part of the New Visions Gallery in Salt Lake and continue to exhibit (see below). Bill’s photo shoot of Francis Zimbeaux’s studio space in 2005, when the artist was still alive, launched what has become one of our magazine’s best-loved features. Carol is a trustee of the Francis H. Zimbeaux Trust, volunteers at the UMFA and produces content for 15 Bytes. In their house the Fultons are surrounded by art, so even when they are not making it they are absorbing it. Though he continues to work full-time as a therapist, Bill puts in time in the studio every day, and continues to go to weekly life-drawing sessions. Carol admires his discipline and dedication, and enjoys the connection their shared enthusiasm brings them. At least most of the time — “Sometimes when I realize he’s not listening to me, I’ll say ‘Oh, you’ve got artbrain again, don’t you?’ and he’ll laughingly and sheepishly admit it.” 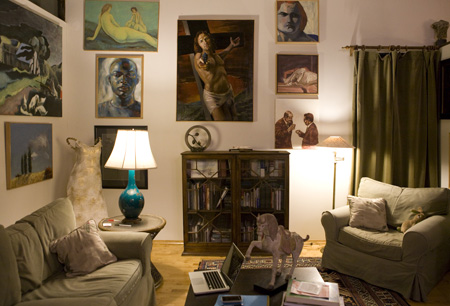 Carol and Bill Fulton are currently part of a group exhibit at Evolutionary Healthcare (461 East 200 South, Suite 100 – across from Phillips Gallery). Up through Wednesday, February 16th, the show also includes works by David Estes, Kathryn Lindquist, Mary Tull and Merritt Stites. Patrons are welcome to visit during regular business hours.