Carleton Bluford and The Process of Cleaning Up 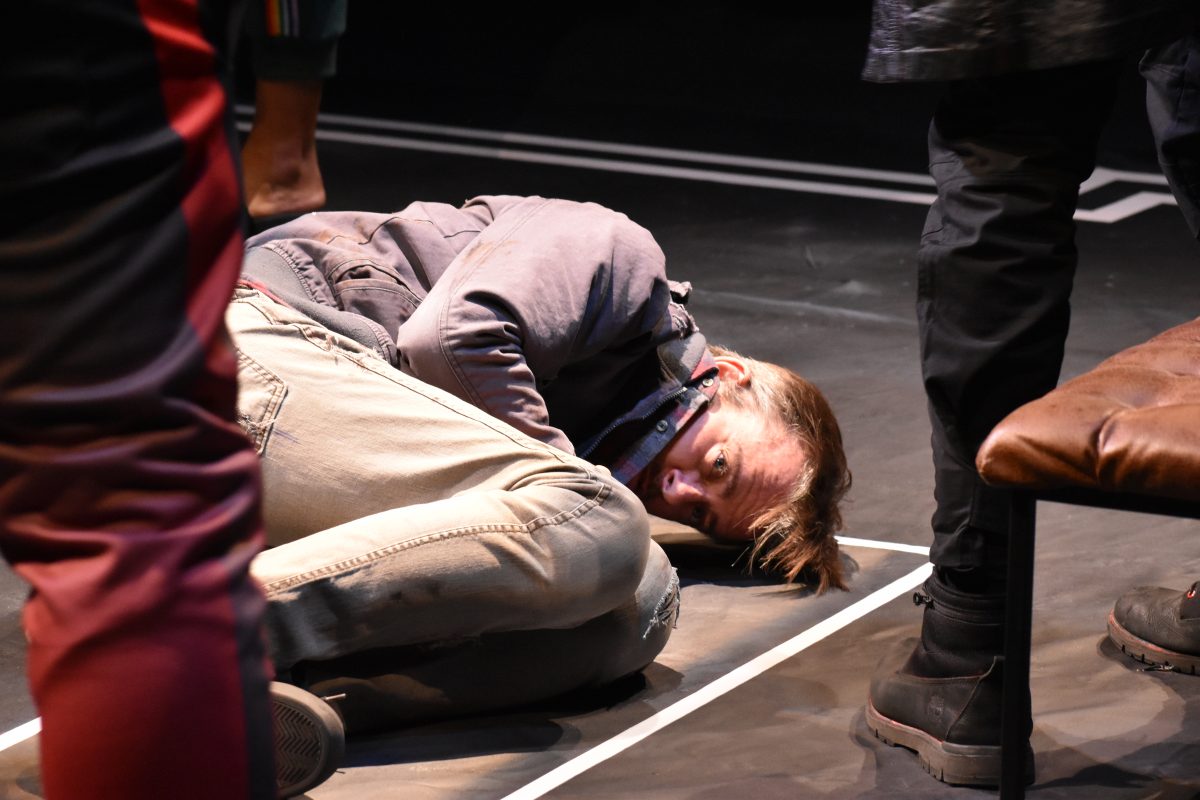 Actor Matthew Sincell is curled up inside a chalk line in Janice Chan’s set for Plan-B Theatre’s production of “The Clean-up Project, photo by Sharah Meservy.

“What a tremendously hostile world a rat must endure. Yet not only does he survive, he thrives. And the reason for this is because our little foe has an instinct for survival and preservation second to none. And that, Monsieur, is what a Jew shares with a rat.”

In the opening scene of Inglourious Basterds, a 2009 film by auteur Quentin Tarantino, an officer of the SS sits airily across from a farmer in the French countryside, drinking milk, and putting questions to the Frenchman with such politeness that — even as spectators — we start to feel menaced. Perrier is hiding Jewish friends under the floorboards and, as the friendliness of Colonel Landa falls into contingency, we wonder what we would do in this same situation. Does Perrier save himself and his three daughters, or betray his friends to the Nazis?

A similarly awful dilemma lives at the near-future bloody center of Carleton Bluford’s new play, The Clean-Up Project, premiering at Plan-B Theatre Company on February 17th. The writing process was not only influenced by Tarantino, but dystopian cinema like The Children of Men and Lars Von Trier’s Dogville.

When I read the description for the setting — “The stage should be drawn out in chalk. The walls, tables, everything should be laid out like an architectural drawing of the space” — I thought immediately of a long-ago production of Rhinocéros, a Eugène Ionesco play from the Theatre of the Absurd. Bluford gives us a play world with no wall protecting the protagonists. It draws on the abstraction of Dogville, but this imagery is part of a wide dystopian river, stretching back to Yevgeny Zamyatin’s novel We and embodying the words of political philosophers like Hannah Arendt, who warns us that totalitarianism is a rupture between public life and private.

“Another police siren is heard. They are both incredibly still. The siren grows louder and louder and then it passes. A beat later they continue on.” The Black couple we meet in the beginning of The Clean-Up Project would like to ignore the chaos outside of their non-walls, but refugees and state power will soon intrude on their relationship. Speaking about how Children of Men affected him, Bluford wrote to me, “We all know what really matters in this world and we get caught up in stupid things/trains of thought that consume our life. It sometimes takes a huge … something to shake us out of it.” With his new play, the Huge Something that Bluford drops the audience into is the Clean-Up Project: an uprising by Black Americans against white Americans. Like Perrier in Inglourious Basterds, the Black couple Melvin and Jordan are hiding white friends. 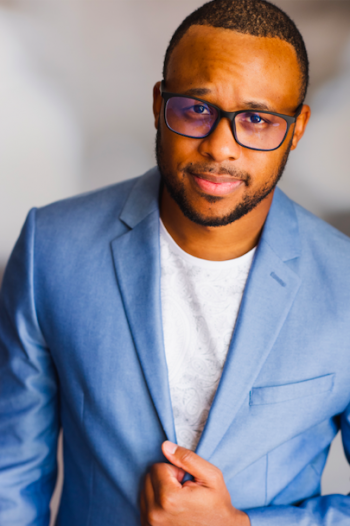 The Clean Up-Project departs in tone and form from, say, Bluford’s Mama, which premiered at Plan-B in 2015. Mama uses non-fiction interspersed with drama to express what it means to be a mother. It could be fairly described as a kind of love letter. It was exactly the dramaturgical gap between Mama and The Clean-Up Project that led  me to talking to Bluford about process.

From the mise-èn-scene, we understand implicitly that Melvin and Jordan’s friends cannot stay hidden. We understand they live in a “tremendously hostile world.” And we understand that Bluford, with his cooked-up dystopia, wants us to feel the horror inside the Black American experience in the early 21st century. The chalk walls cannot keep out the state. Indeed, in The Clean-Up Project, the state holds all the keys to all the doors. The city — the polis — comes airily into the home through the police.

Like many authors, Bluford (also a film and TV actor who appeared on two episodes of The Connors in 2021) “got into theatre…because art has the ability to change hearts and minds.” Yet Bluford says:

[I] didn’t want to only give the audience a chance to think about it on the car ride on the way home, I wanted them to be complicit in the results of the play just as America asks us to be complicit in making decisions whether we agree with the choices or not. I, myself, want to walk away from this show wondering what the next plan of “Action” is for me.

He refers there to a dilemma eventually put to the audience. Bluford has written a dystopian play — one could call it, though, a cultural-emotional reflection of real life — but besides that, he’s written some theatre that shuffles off the genre expectation of victory or doom for the characters we meet in the beginning. The Clean-Up Project is visually deconstructive from the outset and then, in the climax, it deconstructs its own narrative and through an avatar of state power asks the audience to decide the fate of characters we have come to feel for. We become complicit in the results of the play, as we are already complicit in the power dynamics — or “power distance” as anthropologists might put it— inhering our social systems.

Like a poem, a play “should not mean, but be,” and through his aesthetic choice to break the Fourth Wall, Bluford takes The Clean-Up Project from meaning to being. We become the system in the end of his play, forced to follow its logic of justice. No doubt this will be uncomfortable for many viewers but trying to understand the violence against Black people in America was never comfortable. Like the Oscar-winning short film Two Distant Strangers by Travon Free, Bluford’s play brings oppressed and oppressor intimately together and refuses to leave us reassured that good will prevail.

A Black man from Utah, Bluford drew on his own experiences and easy/hard conversations over the years for The Clean-Up Project. A developmental workshop with Plan-B Theatre, “offered varying perspectives, voices, and opinions that were instrumental in the creation of the play. They all helped me affirm and challenge my own points of view.” Speaking from my own experience as a playwright, I know those workshops can be critical in fine-tuning moments for characters, giving them the depth and contradictions needed to be engaging. Unlike screenwriting, playwriting can have robust, on-its-feet collaboration during the early and middle drafts, something Bluford embraces. In an email exchange, Bluford sent me a quote from architect Bjarke Engles, whose radically inclusive philosophy is, “Yes is More.”

A priceless benefit of workshopping — and peer-to-peer conversations about the deep underpinnings of a piece — is that such exchanges can sharpen our attention to issues like “social substitutability.” It’s a concept that figures mightily in The Clean-Up Project. Credited to cultural anthropologist Raymond Kelly, it describes the phenomenon whereby sides are drawn in some conflict and any member comes to represent the whole. Any conservative becomes a stand-in for the Trump administration. Anyone who criticizes Joe Rogan becomes a stand-in for “cancel culture.” I asked Bluford how he struggled with this concept during the writing process and he told me, “I didn’t struggle with the concept as a writer or as a person. I very much understand it.”

At times, process and person are the same. When Bluford “[hears] of a new case of an innocent [BIPOC] person being murdered, [he goes] through this struggle” between the instinct for empathy and “the other side of me feeling like a violent revolution may be the only thing that makes actual change, like the French thought years ago.” Ultimately, he fights against the second impulse, but through the dramatic architecture of The Clean-Up Project wants us to feel the contours of other people’s choices being imposed on us. Not to frighten us per se, but to help us see the contours of our cultural-social system and urge us to remake them with less cruelty. 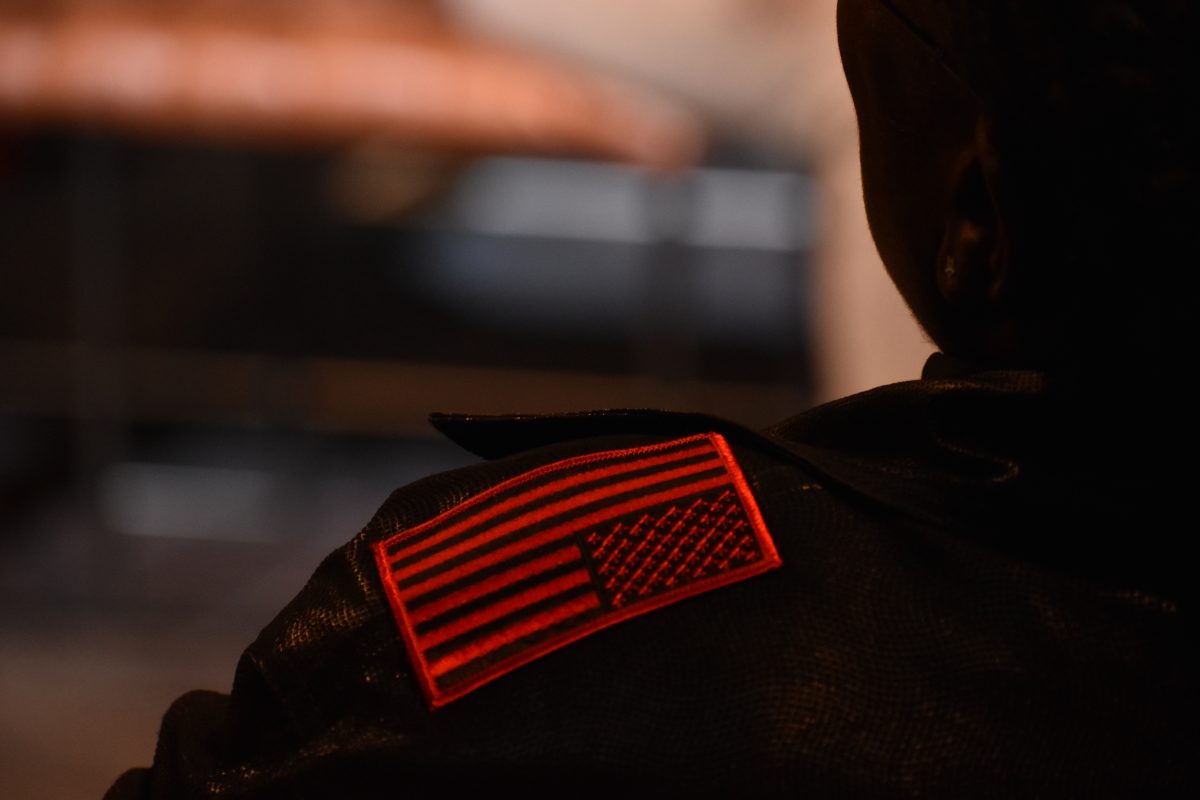 Matthew Ivan Bennett has been a resident playwright of Plan-B Theatre Company since 2007, where he’s premiered several stage and radio plays, including “Stand,” a dystopian thriller and “Eric(a),” which won Best Drama at United Solo in New York. His feature film, “The Whole Lot” will appear at film festivals in 2022. His poetry has been published with Sugar House Review, Western Humanities, unearthed, and Utah life. Matt is a member of the Dramatists’ Guild.