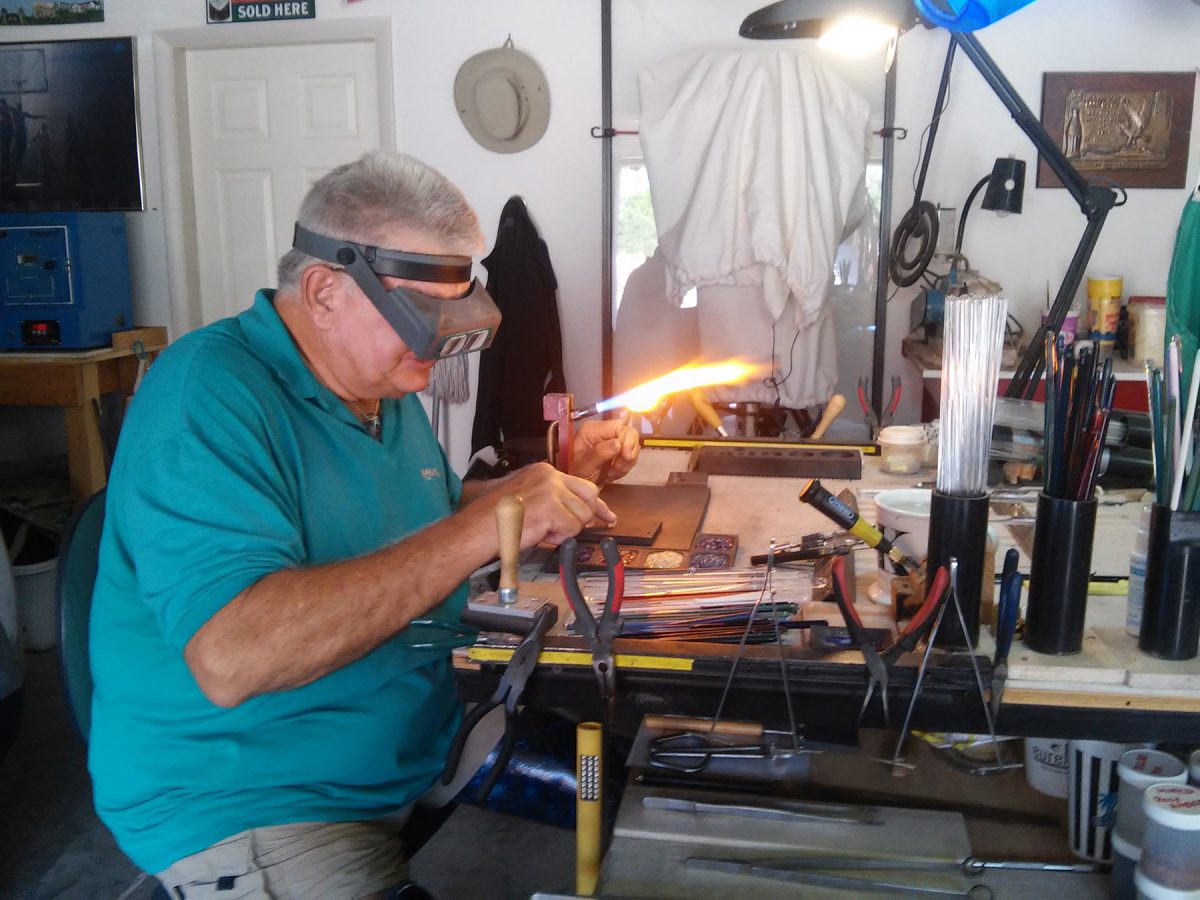 John Kolb, owner of the Kayenta-based Wizard Stones, blends his fondness for the Murano craftsmen of Italy with a fascination of the night sky to create unique glassworks that are truly out of this world.

Employing dichroic glass, quartz crystal for sparkle, and a propane torch that burns at 2,200 degrees Fahrenheit, Kolb has designed some 25 different art pieces, from earrings, key chains, magnets, and wine stoppers to cairns, minisculptures, and petrified wood “gardens.” He has made heart pendants for veterans and cancer-support organizations. Galactic swirls, inspired by the miniature galaxy from “Men in Black,” are now his calling card. “Everything that we do has a meaning,” Kolb says. “It’s not just a piece of jewelry. It has scientific notation; it has research to it.”

The Pennsylvania native’s early endeavors were more athletic than artistic: standing at 6 feet 6 inches tall by his senior year of high school, he competed in basketball, football, wrestling, track, and tennis. He spent four years in the Marine Corps before taking a job as a forklift operator at Coca-Cola in Philadelphia.

With the help of the GI Bill, Kolb earned associate’s, bachelor’s, and master’s degrees, eventually becoming a regional vice-president and part owner of nearly 30 New England plants. He also worked as a training executive for bottlers across the globe.

Coca-Cola was where Kolb received his nickname, from a coworker who commented that he solved problems so quickly and efficiently that it seemed like magic. “Don’t Disturb the Wizard,” a sign given to him by that same colleague, hung on his office door for years. 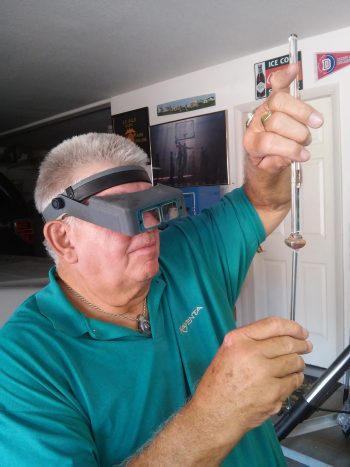 After leaving the company in 1997, Kolb and his wife built a home in Kayenta. He taught business at Dixie State University for six years, and participated in 47 international cruises as a dean of the University at Sea’s computer program. He later became president and CEO of the Snow Canyon Clinic, a small medical facility.

Kolb, a lifelong astronomy enthusiast, hosted twice-weekly viewings and lectures in his home for 12 years, and at Zion National Park through the Road Scholar program. He developed the astronomy and geology merit badge programs for the local Boy Scouts.

During a period when health complications—which eventually resulted in the loss of his left leg in 2012—kept him mostly indoors, Kolb’s creativity flourished. He learned how to use a torch, watched hours of instructional video, gathered advice from other artists, and began to find his own artistic voice.

Kolb has displayed his work at the Little A’Le’Inn on Nevada’s Extraterrestrial Highway, along with Groovefest and the Utah Shakespeare Festival, both in Cedar City. Most weekends, his booth can be found at the Tuacahn Saturday Market in Ivins.

He also sells through his website, squareup.com/market/wizard-stones-llc, shipping to anywhere in the United States. “It’s a little business, but it’s also more of a passion of making people smile,” he says. “And it’s something for my wife and I to do together.”

Betsy, with whom Kolb recently celebrated his 50th wedding anniversary, also practices the traditional Japanese art form of Kumihimo braiding. An intricate combination of eight strands, Kumihimo was the ceremonial ribbon of the samurai. Her necklaces are available through Wizard Stones.

For Kolb, the Internet is a source of endless inspiration. He communicates with glass artists around the world, learning from them and sharing his own knowledge and discoveries. “Now, I’m stepping into a new dimension called fuming,” he says. “I take 99.9% silver and change it into fumes. It emulsifies on a glass rod, and as I do that, it actually creates the gaseous clouds found in a nebula.”

Kolb says it took him six or seven months to master this technique. In the beginning, he sometimes labored for hours trying to make just one piece he was confident enough to sell. Now, each takes about 45 minutes.

An enlightening moment came during a trip to a Mumbai, India, flea market, where Kolb met a teen-age boy expertly carving a Hindu deity using nail files he gathered by jumping in dumpsters behind beauty shops. He sold each statue for $5.

“That’s my dream: it’s practice. It’s the ability to step to another level by saying to yourself, ‘I’m going to do more. I’m not going to quit. I’m not going to give up.’ It never ends. You just keep challenging yourself,” he says. “And I have fun doing it. That’s the most important part.” 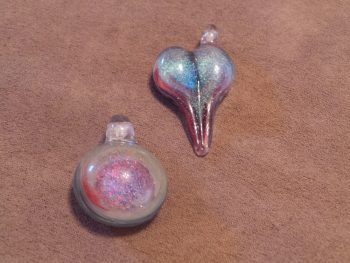 Kolb is among the 60 juried artists participating in the 16th Annual Art in Kayenta Festival on Oct. 9-11. Featuring live entertainment, a silent auction, and a beer and wine garden, this event attracts painters, sculptors, woodworkers, jewelry crafters, and photographers from across the nation each year. “I think the venue has a lot to do with it,” Kayenta developer Matt Marten says. “Artists like to come and present their work here just because of the environment and the community.”

In 90 minutes or less, a dozen artists will each create a finished piece of artwork to be auctioned off, with proceeds benefiting the nonprofit Kayenta Arts Foundation and their ongoing project to build a 10,000-square-foot arts center. This returning attraction is known as “Art in the Moment.”

Roughly 6,000 attendees are expected for the free, three-day festival, October 9-11. More information is available at artinkayenta.org.