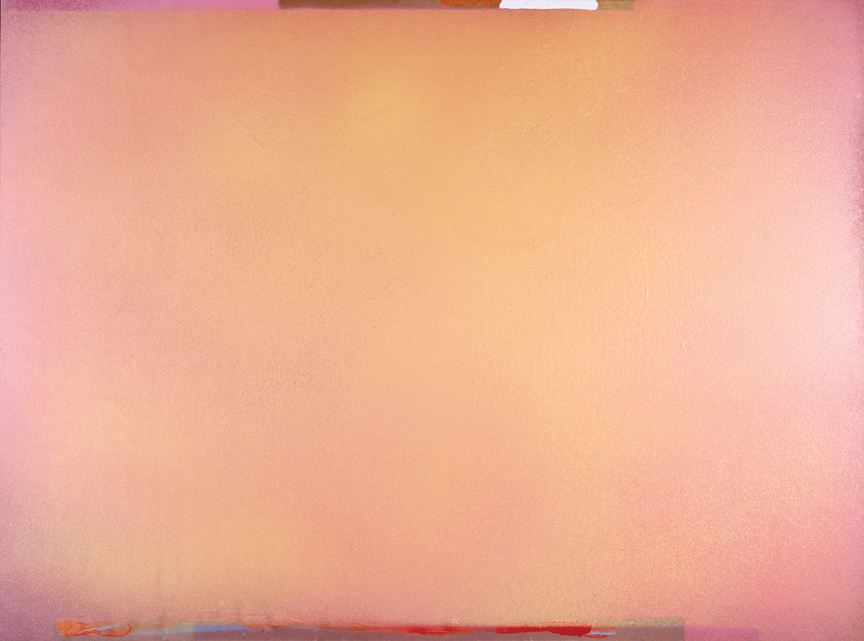 When we address the history of Modern Art, specifically its engagement with abstraction, it is helpful to discuss many points of view and examine different perspectives to encompass its wide body of meaning. Our understanding of Modernism is continually being opened to new interpretation, but a discussion of the period will always be important to understand the canon of art history. Brigham Young University’s Museum of Art has proved itself over the recent years as a center for such dialogues. It caters to the University and community, providing rich educational material while establishing and embellishing the canon.

The museum’s new exhibition, Turning Point: The Demise of Modernism and the Rebirth of Meaning in American Art, not only maintains the standard of the MOA, but curators Campbell Gray and Jeff Lambson have taken their exhibition to a new level. They have made lucid the baffling final years of Modernism, when a hundred-year trajectory toward the abstraction of High Modernism gave way to a variety of new disciplines. Assembling a variety of works from such heavy-hitters as Frank Stella, Donald Judd, Morris Louis, Helen Frankenthaler, Sol Lewitt, Jules Olitski, Jenny Holzer, Robert Morris, and Kenneth Noland, Turning Point takes on a challenging period in art history, one which the Museum and this reviewer find fundamental to understanding the shift from Modernism to Contemporary art. Consequently, I asked Lambson, coordinating curator of the exhibition, to walk me through the exhibit. Although entry to the exhibition is free, one might entertain the idea of paying for a tour from Lambson, an experience that was as enlightening for this reviewer as it might prove lucrative for Lambson.

This exhibition brings into focus artists’ reactions to the art of the latter years of Modernism — the high abstraction of the 1950s and ’60s. Lambson describes Modernism’s obsession with abstraction as the result of a hundred-year trajectory that began with Impressionism and involved artistic exploration that increasingly distanced itself with subject matter and a relation to the viewer. “Art became abstract not because wealthy patrons requested it, but because around the 1860s artists gained the freedom to explore and experiment on their own. The Impressionists broke with the French Academy, and the exploration of light in a painting was more important than its subject matter. Following the Impressionists, a rapid succession of movements, including the Fauves, Cubists, and Abstract Expressionists, became more concerned with an exploration of the canvas itself rather than subject matter that was inspired by things and events that lay beyond the canvas.” 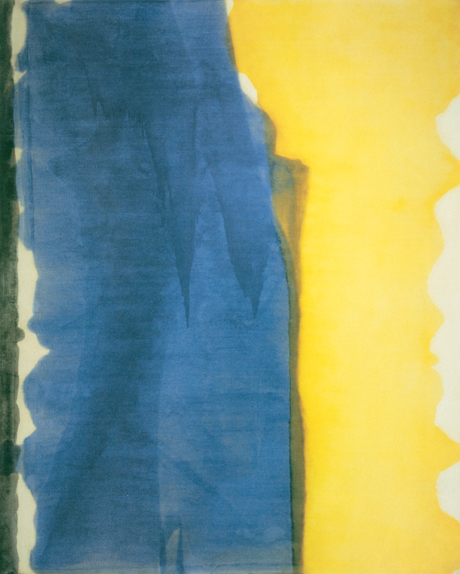 Sometimes the artists themselves sought to explain what they were attempting with their canvases and at other times writers, or formal critics, were the ones to make verbal sense of these visual explorations. In the 1960s, Clement Greenberg became one of the most influential of these critics and as Lambson explains, his views influenced many artists. “[Greenberg] felt that art —painting in particular — was headed toward purity, which he defined as flatness. Artists during this period sought to achieve Greenberg’s vision of flatness or ‘purity’ by pouring paint instead of brushing, or by leaving a portion of the canvas unpainted, or by emphasizing the edge of a painting with a distinct mark, destroying any sense of illusion or depth. Because these late Modernists focused on discovering the essential nature of art itself by focusing on the surface of the canvas, they believed their works excluded everything from the outside world including the viewer and the context the work was shown in. Museums bought into this movement and the artists creating this new work became famous and were often hailed as geniuses,” Lambson says.

Turning Point “begins” with some of these late Modernist works, from Morris Louis’ fluid bands of colors in “Doubt,” (1959) to the hard-edge abstraction of Kenneth Noland. “Artists such as Morris Louis worked with a paint that kept its vibrancy on the unprimed canvas with a startling effect,” Lambson explains. “He poured, dripped and manipulated the canvas while leaving the edges bare. There was no depth, no meaning, just an exploration of the flat surface of the canvas to create ‘purity in art.’ Louis and Kenneth Noland along with Helen Frankenthaler among many others developed different methods of exploring the flatness of their canvases. Kenneth Noland’s ‘Sarah’s Reach’ (1964) targeted different tones of similar colors in abstract shapes to reach this aim. These differing tones contrast each other and create an effect of flatness, which negates any depth on the unprimed canvas . . . Jules Olitski’s ‘Pearlescent Flood’ (1970) whimsically implies some depth, but adds strips of pigment on the edges to make you realize that it is a flat canvas,” the curator explains. 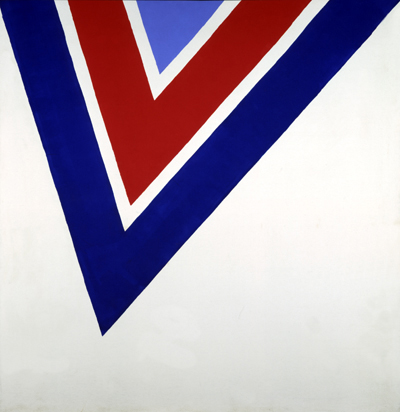 From this point, the exhibition examines how the trajectory of 20th-century art turned from the Modernist conception of art. “Not all artists agreed that Greenberg’s flat abstraction was the pinnacle of painting,” Lambson continues as we move about the exhibition, “and a group of sculptors labeled the Minimalists began to disagree with Greenberg on several points. They created three-dimensional works that shared that same space, the same light, and the same air as the viewer. These works actually sought to create a spatial relationship with the viewer, refuting late Modernism’s claim that all meaning was self-contained. To the late Modernists the painting was only an object. With the Minimalists it was about the object and the viewer. They acknowledged the physicality of the viewer who shares the same space as the object.”

At this point we have turned our attention away from the walls of the exhibition and are considering the various pieces that occupy the space on the floor and Lambson continues to discuss the ideas of the Minimalists. “Another point argued by the Minimalists was that the artist was not a genius or god. Sculptures were created by fabricators, and often the artists themselves did not even create the works! The industrially produced forms of Minimalism were a direct attack on the exalted nature of late Modernist painters. A final point to add about Minimalism is the idea of gestalt. For example, Judd’s work contains four identical large cubes, but the viewer need only see the first cube to realize the others in succession are all the same. The work almost becomes a painting in that sense.”

One of the pieces we approach is Ronald Bladen’s “X” (1965). It is exactly what the title emplies, a sculpture of the letter x, standing seven feet high. “[It] is about presence,” Lambson says. “[It] is made to human scale to directly acknowledge the viewer. Here, meaning is not completely self-contained, and the viewer begins to become a part of the work.” Sol LeWitt’s “49 Three-Part Variations on Three Different Kinds of Cubes” is an equally descriptive title for the piece in question. Lambson points out that it bears no trace of the artist’s hand, “yet the viewer is compelled to consider the mathematical formula used to arrange the cubes.” 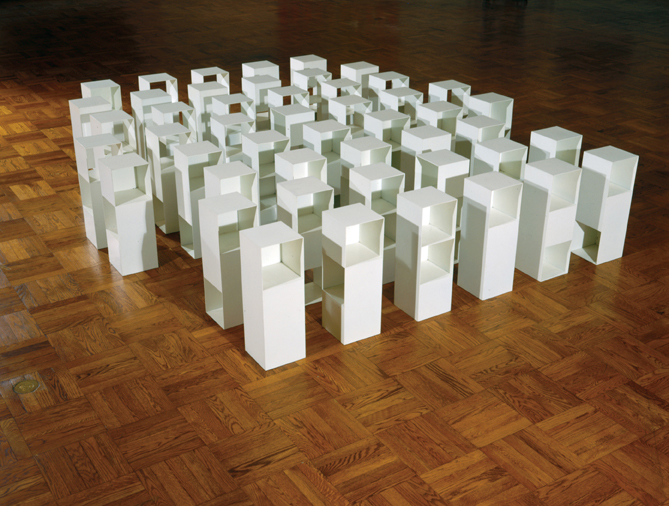 LeWitt’s piece serves as a bridge to another important movement highlighted in the exhibition: conceptual art. Though this portion of the exhibit contains objects as one expects in an art exhibition, what the visitor will find is mostly framed instruction. “Building on the Minimalists’ ideas, conceptual artists took the notion of the viewer’s importance a step further, by declaring that the object did not matter at all; only viewers and their perceptions of the work were important,” explains Lambson. “Art was created using language and systems, such as Joseph Kosuth’s “One and Three Mirrors.” The artwork consists of a printed dictionary definition of mirror, an actual mirror, and a photograph of the mirror. The artwork is not any of the three objects, but rather the process of a person thinking about the different manifestations of a mirror. Utilizing language, systems, mapping, indexing, etc., artists produced works that caused viewers to create the artwork in their minds. The object itself was just a trigger,” Lambson says.

In addition to these historical works, the curators have included contemporary pieces that were influenced by the Minimalists and conceptual artists highlighted in Turning Point. “This exhibition is titled ‘Turning Point’ because at this particular moment in time, the reactions against Modernism by Minimalism and Conceptualism caused an explosion of possibilities for the artists who followed. Suddenly art is no longer void of interpretation, but can be full of meaning; now the object is important, the viewer is important, and the artist is important. Artists no longer had to follow the trajectory of Modernism. Suddenly anything and everything was possible. This is often called Post-modernism. Artists can now begin to be influenced by ideas. Now artists can address politics, feeling, racial identity, gender, demographics etc. This shift in thinking, with its new-found focus on the viewer, is an important part of experiencing and understanding the art of our time.” 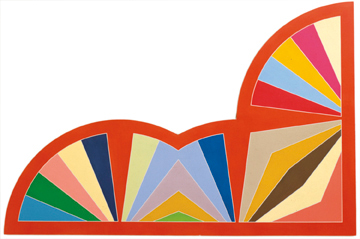 As an art reviewer who thought he knew just about everything there is to know about Modernism, it was enlightening and humbling to engage in a dialogue with Jeff Lambson. It is not only exciting to be more fully educated on the intricacies of something as complex as this period of Modernism, but exciting to discover more, to learn more, to know more about art. I look forward to the museum’s upcoming program of contemporary art for which Lambson says this exhibit serves as a foundation.

Turning Point: The Demise of Modernism and the Rebirth of Meaning in American Art continues at the Brigham Young University Museum of Art through January 3, 2009.