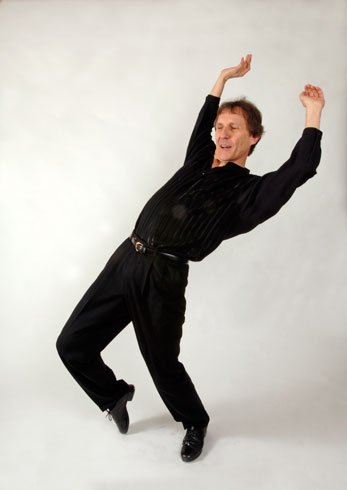 William (“Bill”) Evans’ RDT-sponsored solo concert at the Rose Wagner was completely captivating. The dancer was, by turns, nostalgic, frenetic, smooth, effervescent, hilarious, and always, always an outstanding performer just givin’ it his all.

What a memorable night for those fortunate enough to have been there.

Had he not kept reminding us that this was his 75th birthday tour, it would have been easy to forget – he was that good. Tap is exciting and exacting and Evans is a master dancer and choreographer of both it and of modern dance.

He began the evening sitting comfortably on a stool, mentioning that his granddaughter was in the audience, recollecting his early years (1967-74) with RDT, praising Linda C. Smith for keeping the company going these 50 years, recalling such riveting former RDT dancers as Tim Wengerd – one of too many artists sadly lost to AIDS in the late ‘80s and early ‘90s. Evans would return to that stool to change shoes and chat several times during the evening.

“Three Preludes” (2009), which Evans choreographed and previously had performed at the Rose Wagner in front of his late mother and therefore danced in her honor at this concert, is set to the music of George Gershwin. He tapped in lovely rhythm and then flat out – leaving the audience breathless (and Evans, too, more than a bit). The choreography was elegant, the execution thoughtful and, of course, flawless.

A dying friend inspired 1997’s “Saintly Passion,” Evans confided. Asked what his favorite song was, Michael Cava had replied, surprisingly, “St. Matthew Passion” and so a most evocative piece was born. Using a bench for a prop, Evans was pure poetry as he performed this sad but ultimately uplifting work that involved gorgeous arm movements.

An audience favorite (mine, too) was a video of “Bounce Boy” from “Jazz Three Ways” where we were treated to Daniel Nagrin’s choreography, music by Nat “King” Cole and Bill Evans filmed in, get this, 1984! Evans was sassy, his legs lifted WAY high, his smirk perfection.

Highlight of the night has to be 1990’s “Excursions,” with choreography set on Evans by Fred Strickler. Evans explained he normally performs to live piano so is able to take a break after two of the three Samuel Barber movements while the pianist plays for a bit. But to a tape, he would have to dance straight through. And he tapped smoothly throughout, rarely taking a breath it seemed. Half the audience came to its feet; the rest, I suspect, were too stunned to move. It was the stuff that dreams are made on; mine were that night. 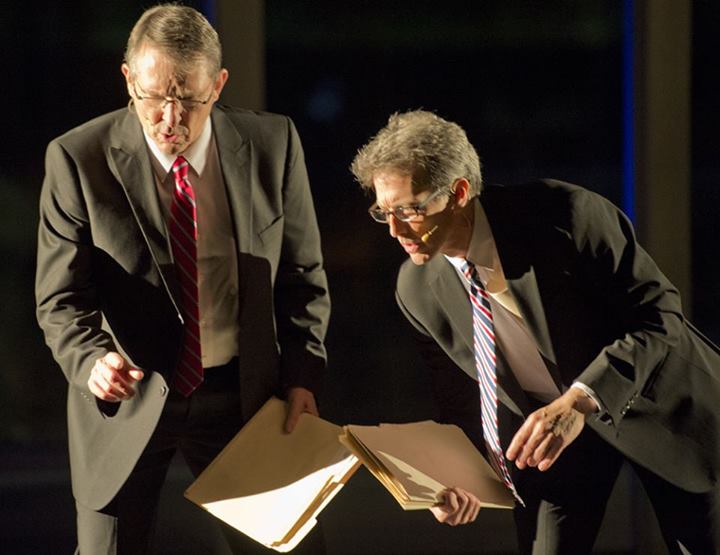 Bill Evans and Don Halquist in See You Around, in a previous performance, photograph by Milton Tatum

Performance art went beyond dance to two excellent pieces with text by the renowned Claire Porter, who is coming to RDT later this month. “See You Around,” performed by Evans and his life partner Don Halquist, was about two characters – employed by a shadowy company – who keep meeting in an elevator to discuss company surveillance, secrets and the constant disappearances of staff. Sounds eerie, but was actually uproarious, largely due to Evans’ and Halquist’s perfect timing and coordinated movements.

A solo piece by Evans, with text and direction by Porter, concerned a job interview – funny but poignant. This easily could have become farcical in several places, but Evans remained in perfect control of his performance throughout and kept the audience totally involved.