Could Gallery MAR have discovered a match made in art heaven? Montana artist Shawna Moore and Californian R. Nelson Parrish produce very complementary work, to the point that even their color palettes and produced textures are similar. In MAR’s latest exhibition, Time, the two artists are brought together to showcase an abstract approach to representing human relationship to nature through art. Using encaustic, resin, wood, and other media, Moore and Parrish have provided an exhibition that is enticingly colorful while also approachable and visually attractive. They each take a different approach to representing natural forms that goes well beyond simple representation.

Bridging the gap between man and nature, Parrish uses resin to meld fiberglass with rich, naturally patterned dark woods. Influenced by landscapes, his work often includes strong horizontal lines like a separation between sky and Earth. His process illustrates the entangled nature of man and his surroundings, while also provoking the viewer to search and distinguish between natural and created elements. Though combined, the synthetic and natural elements do not fully seem to meld, the synthetic too bright, almost jarring against the natural wood grain to be anything but man-made. His sculptures function as a map of human influence on nature, the jarring ways in which humanity has made its mark, but also the beauty that comes from melding with one’s surroundings.

His “Untilted No. 89, 90, 91 (Triptych)” is composed of three separate wood and resin squares which hang vertically together, the three pieces having been created out of the same long piece of wood, cut into sections, the deep grain continually running through the set. The religious terminology is obvious on some level, playing into the three squares as each a member of the Trinity, but the vertical format is reminiscent of another religious archetype, Jacob’s Ladder, which often takes the form of connected panels folding in on each other, representing the bridge between heaven and Earth. His works do seem to evoke a type of transcendence, especially his hanging sculptures which require the viewer to crane their neck upwards to see them. Though “Triptych” is a fascinating piece, perhaps Parrish’s most dynamic works are these hanging sculptures. The craggy form of his stalactite sculptures, appearing as giant icicles waiting to drop from an overencumbered rooftop, suggest something of the artist’s native Alaska. His art speaks to an overwhelming awareness of surrounding, shifting landscapes and savage, unforgiving frost. Shining like ice in sunlight, the clear resin between sections of color creates a translucent illusion of floating forms, incomplete objects. 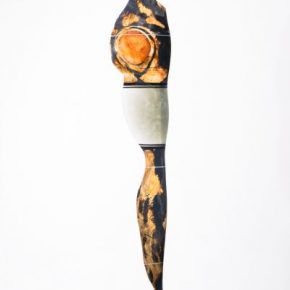 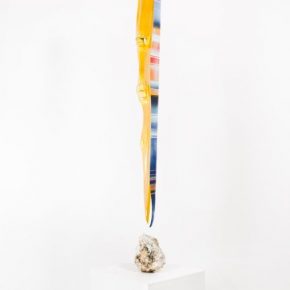 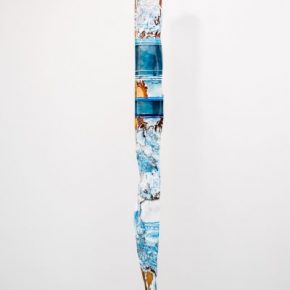 Shawna Moore’s encaustics are impressive in both vibrancy and smoothness, creating shiny fields of pastel colors imitating the most abstract natural forms. Her painting “Sastrugi,” named for the ripples formed across snowfields in the wind, reflects this movement through the inclusion of small spots of color across the waxy surface of her painting. These colors capture both the look and feeling of wind across a snowfield, biting against exposed cheeks and noses, tiny shards of ice pricking the skin. Many of her snow paintings echo this feeling, cold represented in the image through the shiny, crystalline texture of the wax like morning frost. 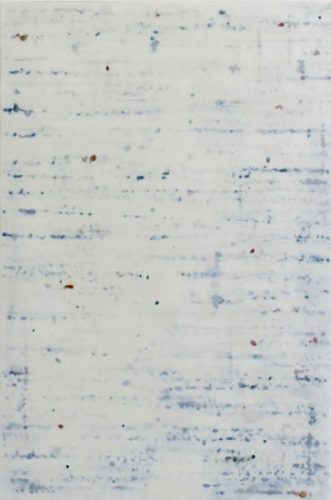 A quick glance at the composition of her encaustic works might call to mind the color field paintings of Mark Rothko, but Josef Albers, a student of color relationships, light, and optics, all of which play into Moore’s interest in Earth and sky, might be a fairer comparison to Moore than the deeply traumatized, Nietzschean, mythology-obsessed Rothko. Moore’s use of color in all her works, like Albers, seems carefully chosen to produce a desired effect, a jarring feeling of looking at a tall cliff, the rise of an ocean tide, the numbness of fingers on a cold day. Moore’s color relationships are particularly interesting in her works “Down the Line” and “Candy Apple Gray,” which feature unique, vertical compositions positioned like dramatic cliffs against a candy-colored sky. “Candy Apple Gray,” in particular, is fascinating in the same way as the Rubin vase, each form alternatively seeming to appear in front of the other, the negative and positive both creating an image.

Together, Moore and Parrish explore the abstract nature of landscape representation in art. By embracing the effects of color, light, and location as important elements to landscape art creation, these artists have moved from representing the visual characteristics of the land to the sensations of nature, how it feels to be outside. Though they each explore this idea differently, their works display well together in both aesthetic and conceptual content. 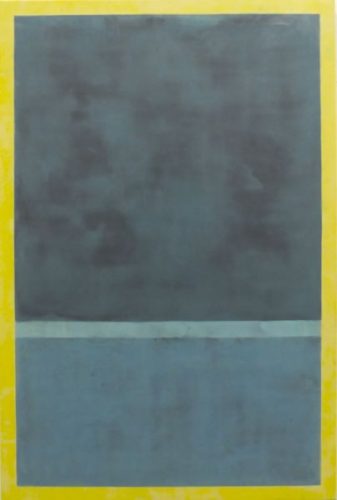 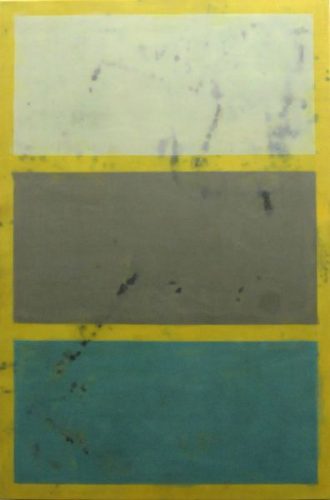