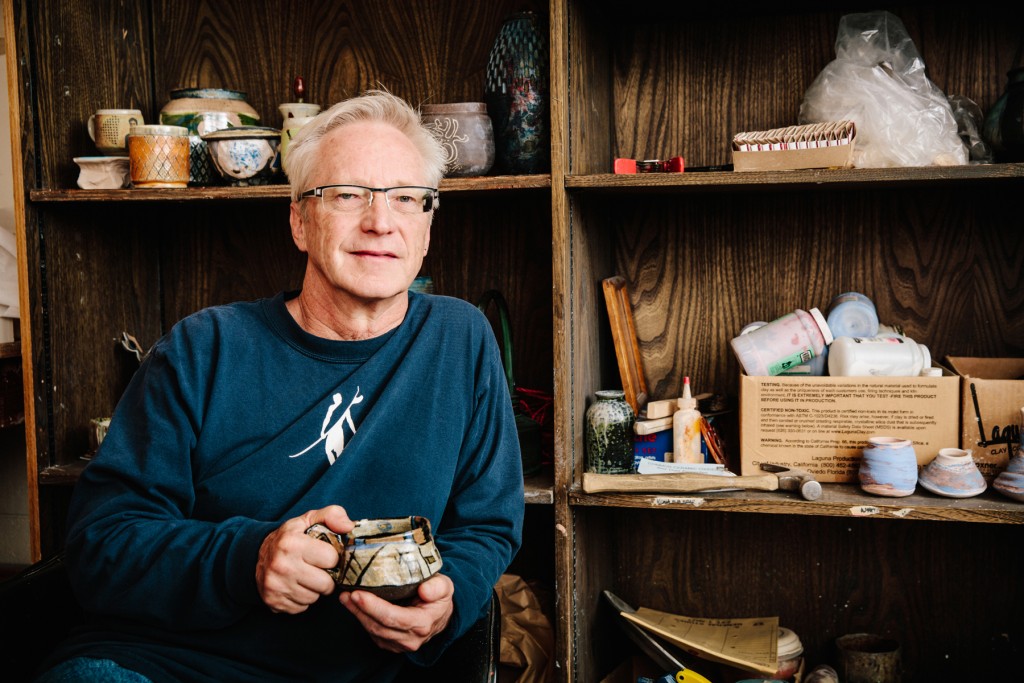 Brian Snapp inside his studio at the University of Utah. Photo by Simon Blundell.

There are numerous things to consider in ceramic artist Brian Snapp’s work, but one is fundamental: Clay is the medium that’s the message, and centuries of archaeological discovery support this.

“There’s 30,000 plus years of the history of ceramics now,” Snapp says. “They used to talk about 10,000 years, but that was 10,000 years of pottery. We’re finding sculptures that are 30,000 to 60,000 years old: little Venuses, little female icons. So that’s one reason I like to work with clay. It has all of that history that comes with it. It makes it difficult – that’s a lot of baggage to carry.”
At the same time, he says, “there’s this constant of civilization within clay. Without clay there would be no civilization. History is written in clay. We know more about ourselves from little shards and bits and pieces of clay than we do from any other medium.

“Once clay is fired it doesn’t go away,” he maintains. “You can break it up in little tiny pieces but then archeologists go and dig those pieces up and glue them back together and we discover more about our values, our value systems, our interactions with peoples of the world through clay. You can even make that extension now with the digital age and computer chips and silicon. We’re still documenting ourselves and our actions and our likes, dislikes, wants and desires through clay.”

Looking around at Snapp’s current show at Finch Lane Gallery — several are large abstracted architectural works created as a single piece that didn’t quite fit in a 6-foot-high kiln — one observes that these certainly aren’t teapots. “I have made teapots and I make cups,” Snapp replies, taking a sip of tea from one elegant example. “And I teach throwing. That’s what I first learned to do with clay and I’ve been doing that for 40 years. More. I started throwing the summer between middle school and high school [Los Alamitos in California, near Long Beach] in a summer class. In high school all we did was throw pots, surf and play water polo.” He was listening then not to the Beach Boys, but to Bowie, Dylan, Brian Eno and Lou Reed, along with a lot of early jazz and blues. 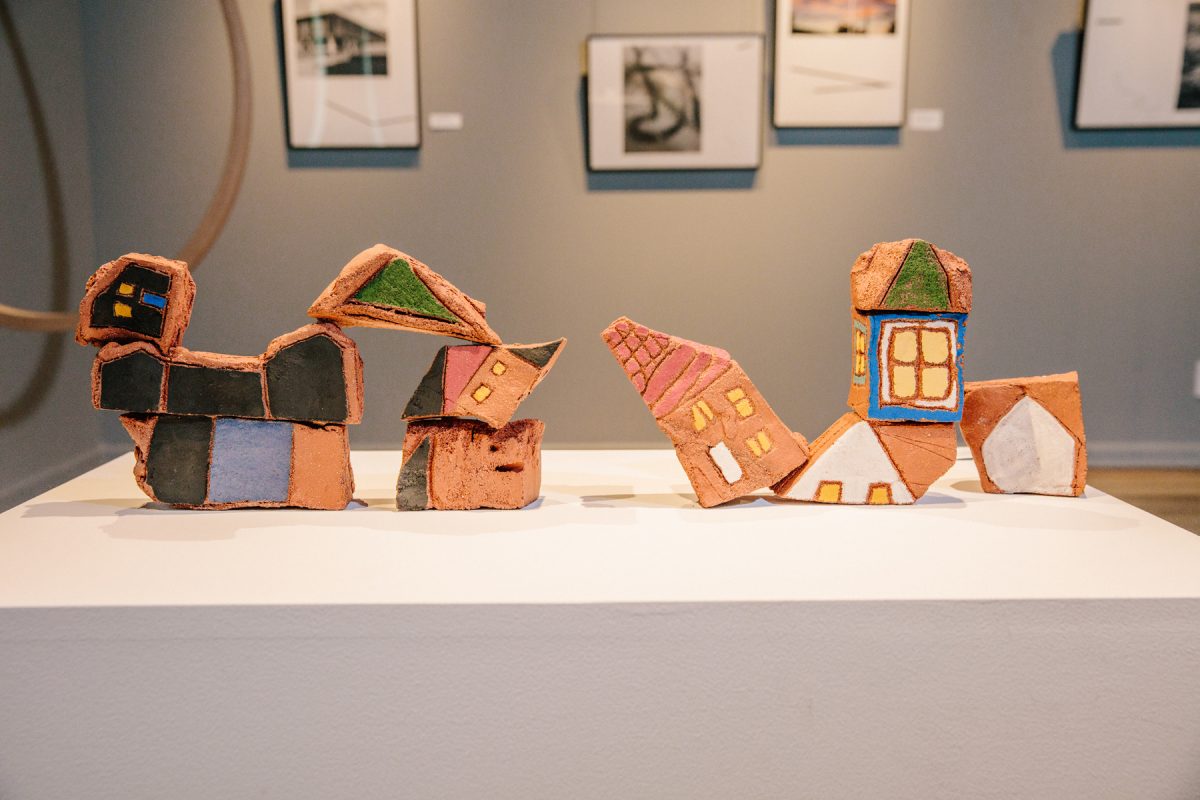 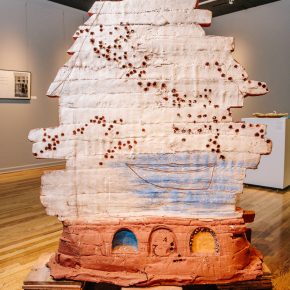 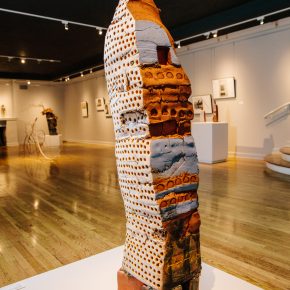 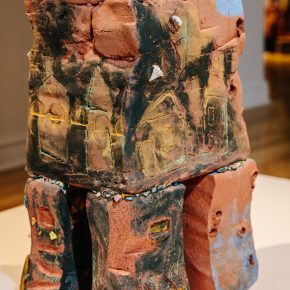 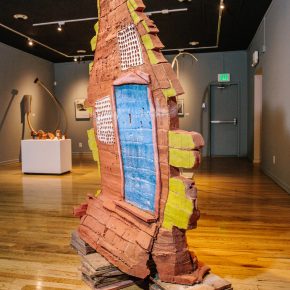 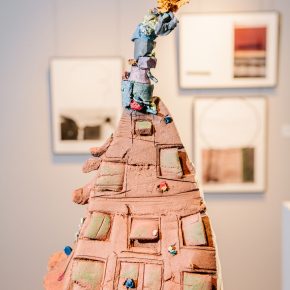 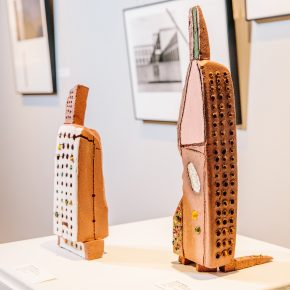 At Cypress Community College, where he earned an associate degree, he was on “a six-year plan” because he was playing in rock bands: going into school when a band broke up and out again when he hooked up with another. He played tenor sax and was lead singer. “The heady years of the late ‘70s and all the clubs in LA,” he recalls. And not just any clubs — the legendary Troubadour, a Rolling Stone best rock club located in West Hollywood, and the famed Whisky A Go Go, were among them.

He got his bachelor’s in music at San Francisco State University and then went back down the coast, picked up a teaching credential at Cal State Long Beach and taught grade school there for a while before deciding that wasn’t for him. “I went back to Cypress College and worked with Charlene Felos who was and still is a fabulous and beautiful mentor and person,” Snapp says. She suggested graduate school, something that never had occurred to him, and said he should talk with Joe Soldate, considered to be a “revolutionary” ceramics professor at Cal State LA.

“I got my MFA in ceramics from there and started teaching. I was a freeway flier, I taught at three different colleges for five years and then serendipitously met David Pendell [then at the U] at a conference and that’s when I went to Utah.” A very circuitous road, he admits. “No surfing here,” he says, “but I do go back every year and hang out with the kids and grandkids and surf.” He gets emotional support locally from wife Michelle and 14-year-old daughter Samantha and has a son and two grandchildren on the West Coast. 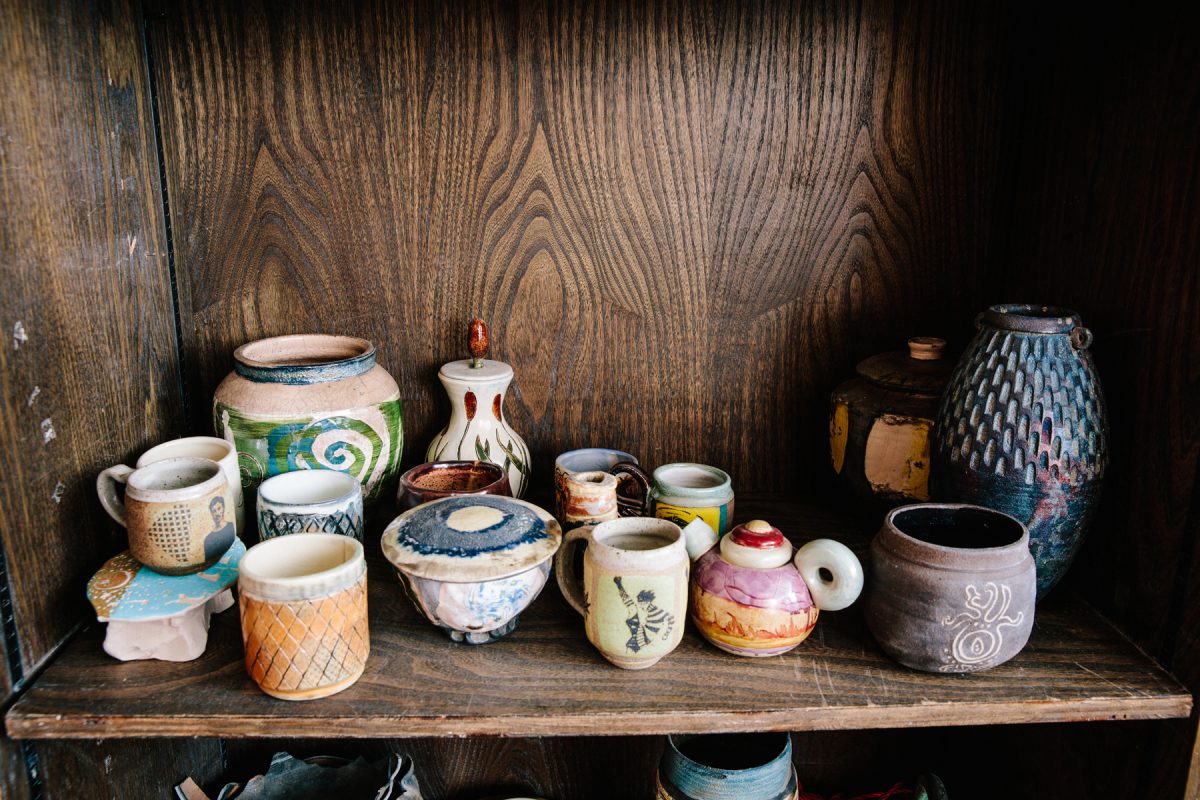 Snapp is currently professor and area head of ceramics at the University of Utah, and, from 2009 until June of last year, served as chair of the Department of Art and Art History.  He has shown work internationally and presented lectures and workshops in China, Korea, Italy, New Zealand, California, and, of course, Utah. His work has been seen here at Finch Lane several times starting as early as 2001, at the UMFA, and has been in several projects that Hikmet Loe curated, including the Salt show at the Ephraim Granary last year.

“I also had a mural that Kim Martinez was instrumental in helping me with that was a mixed-media piece having to do with war. It was a giant mercator map I painted using magnetic paint and then I had those car ribbons that are magnets for cars; tilted in the right direction they start to look like bombs. Painted black they went from North America into Europe and across the globe. The map was painted boy blue with pink longitude and latitude lines,” Snapp says, “so it was about, why are we sending our children to kill and be killed?”

As to the evolution of his work and the expression of social concerns that he is known for putting into it: “I guess I started making pots and selling pots and then when I got to Cypress College with Char, she was always pushing us to go outside of that,” he says. “Still using the wheel, but [telling us] how we could alter work and move work – that the potter’s wheel was just a tool, that it wasn’t the end, it was the means to an end. So I started working sculpturally with thrown objects and started to think about situations and environments and drawing on ideas of the human condition and how those types of things could be related in sculpture and art and with clay. Clay is just the most amiable medium for expression. You can express anything with it.” 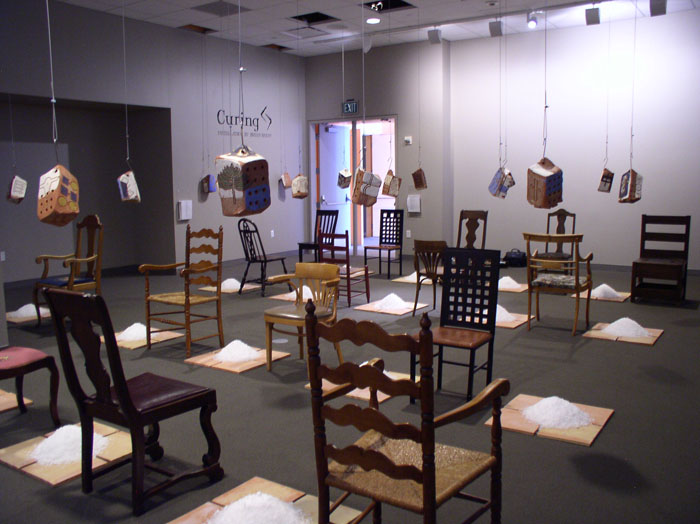 Broadly, he says, his work “came from inside me and my situations and view of the world and creating my own kind of environment to show my perspectives and beliefs and values. And it wasn’t ‘til later that I started working more outside of myself, more looking toward things that were going on in the world – not really searching that out, it was coming to me quite heavily – news of the world, starting back with the first Iraq war and feeling helpless about the situation and not feeling like I had any kind of tools to make things better.

“And, as my art started to change [with his 2006 “Curing” show at the UMFA that we reviewed here], where I started to work to create environments, installations for people to sit and contemplate in, that had signs and symbols and imagery . . . as diverse as healing plants or alchemical symbols, hobo symbols that would say these are good people, these people will feed you. . . . [His fired clay pieces hung suspended from meat hooks above chairs that visitors were invited to occupy.] I was looking at these things as metaphors for thinking differently and possibly for creating a type of energy. I’m not a practitioner of any particular religion, however I do feel a need spiritually to help and also a motivation to put something out there that might help. 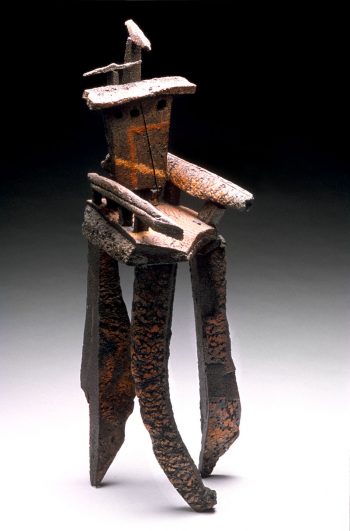 “I found a Reiki symbol [Reiki, he says, is a type of massage where you are not actually touched, ‘it’s more about energy, your chi, and trying to release some of that energy’] . . . and what I really liked about this particular symbol was its long-distance healing. I thought if this could really work; the idea of standing in Salt Lake City but sending something to Iraq, Iran, the Middle East, all that was going on with Desert Storm, if that could work, even a little bit, I will have done something. I do believe in the ripple effect. I do believe people can pick up these ideas and internalize them and who knows where they’re going to come out?”

The last installation he created for the UMFA was for the faculty show four years ago called Re-Present and it used a lot of similar symbols and signs. He had created a ceramic library for an exhibition in Seattle with over 400 tiles of “books” on shelves and re-presented the work in Utah with tiles that went to the top of the ceiling. “So it was 15 feet high and 33 feet long. With some lecterns so you could take the tiles, put them on the lecterns and contemplate.”

Inspired by poets such as Shane Koyczan, Pablo Neruda, Billy Collins, Allen Ginsberg and Emily Dickinson, Snapp also reads fiction widely, from Haruki Murakami to J.R.R.Tolkien to John Barth, and talks enthusiastically about Flannery O’Connor’s short stories, a collection he has just finished. He also has been highly influenced by Gaston Bachelard’s The Poetics of Space.
At Finch Lane, his seven collected works (different, he says, from anything he has done previously), are all titled “House of My Brother/House of My Sister” (because they are part of the same idea) and inspired by a poem from The New York Times Magazine he is moved to read aloud as we stand before one of his weighty ceramic pieces:

you throw a stone

next to you
we are

where did they come from

This latest work is probably the most literal he’s made, he says. “I’ve never made work that spoke specifically to architecture. Most of my work has either included the architecture through installation or created a new space for things to happen in, so these are all firsts.” 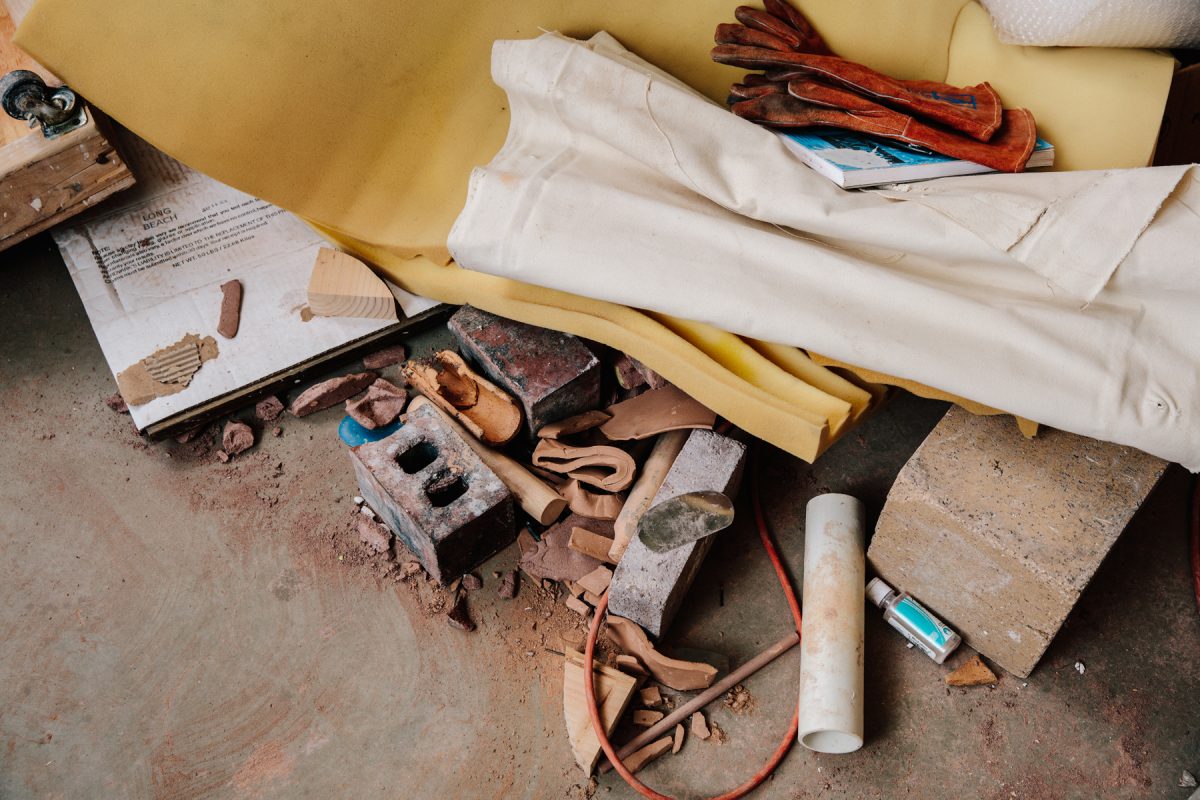 They speak to the loss of culture, the iconography that’s being destroyed in the world, people’s homes, “where all of their dreams and aspirations and longings are being displaced and that’s what set off the work in this show,” Snapp says.

“So there’s this playfulness,” Snapp observes, “this childlike quality, and an adult intelligence of collecting and putting things together and a hope in them as well. The other quality that’s important to me in making is that it says clay. It doesn’t say any other medium but clay. Although it’s fired and it’s hard, it still looks very soft. So there’s constant contrast between the hard and the soft, fired and unfired, and that transformation and so it’s constantly speaking to process and it’s constantly speaking to the idea of making. I also think it doesn’t seem particularly finished.”

Like one of his pieces at Finch Lane, the world is twisted, he says.  “Everything is twisted. It’s so layered and so twisted and so convoluted and it’s so hard to unpack what is going on in the world and how the hell we got here.” 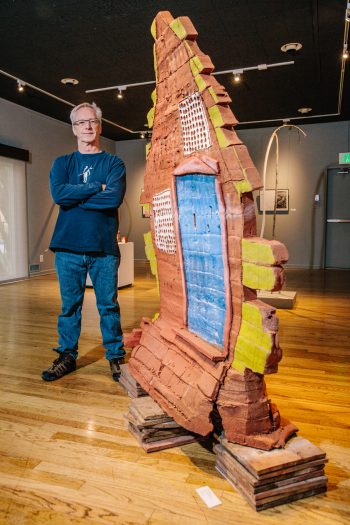 “I have thoughts in my head, I have research that’s gone on in my head, but I really just have to put my hands in the clay and let that stuff come out as I’m working.”

Brian Snapp will discuss his work on Saturday, May 14, at 2:30 p.m. at Finch Lane Gallery, Salt Lake City, preceded by a talk by Maryann Webster at 2 p.m. The show, which also includes artists Jim Jacobs and Lewis J. Crawford, runs through June 10.

This profile appeared in the May 2016 edition of 15 Bytes.