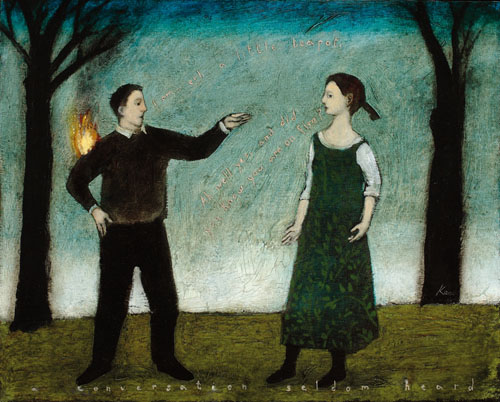 Painter Brian Kershisnik does not work from photographs. Nor from anatomical diagrams, or even, apparently, from life. His paintings are not copies of nature; they come about during a dialogue between the marks his hand makes and his eye’s response. Although the process may begin in his mind, with an impulse he calls a “hunch,” he knows better than to allow thought too great a part in what follows.

It’s often said that his subject matter is the human condition, but that’s too broad, too generous. His subject is the Kershisnik condition. He told me once that his wife rejects being identified with the women in his paintings. She’s right; they aren’t her, though they share her, and his, universe of possibilities. He paints in an intensely personal code only he understands, and that not always perfectly. But so what? Anyone who uses a symbol like love, perdition, or god refers to something just as personal, and yet we bring our own experience to bear and somehow it works: we perceive each other, often with astonishing accuracy.

We prefer to listen to the voice that touches us most deeply. For many, Brian Kershisnik’s paintbox is like the voice box of a diva. Renaissance painters discovered how to make paintings that looked like you could just walk into them. Kershisnik’s admirers want to stay there, the way everyone used to wish to be in heaven.

A good painting is about as close to heaven as I anticipate ever coming, and when I stand before a Kershisnik, the only immaterial elements I go for are metaphors. Some of his constructions are too theologically specific to work as paintings. One not in this show, called “Measurement From Memory,”shows a woman encountering the material world with the help of an immaterial being. But we remember nothing until we learn it, and the only way we have learned anything is by empirical measurement, so unless the angel symbolizes the rigor by which science tests hypotheses, it falls flat. On the other hand, “Swimmers,” which is here, captures the sensuous feeling rather than the look of traveling through water, which is as close as I have come while awake to my dreams of flying.

Like Christ, Kershisnik speaks in parables . . . of a kind. His anecdotal visual narratives are inhabited by young, fit, sensuous, and attractive figures who convey a confidence in themselves we can only feign. They are the apotheosis of missionaries, who instead of black and white wear idealized nature, like the near figure in “Women Not Sleeping.” Choosing to ignore anatomy also allows liberating her from its restrictions. Notice her arm, or that of the woman in “Perdita Quaerimus,” who points gracefully downward with her serpentine limb, unseen by two characteristically distracted men. A far worse example of distraction shows up in “A Conversation Seldom Heard.” She could choose to admire his impersonation, or criticize it, but chooses to engage him on an authentic level instead. It’s not seldom heard because it seldom happens; it’s seldom heard because most of us lack her candor. 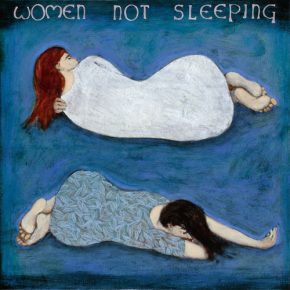 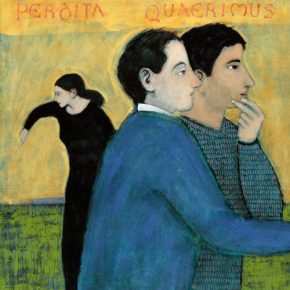 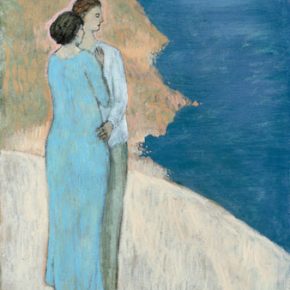 The only listing I could find for “Perdita Quaerimus” referred to the painting. I get “Au Bord de la Mer,” but I’m not sure why this evocative image of standing on the brink needs a French title. Someone may have told Kershisnik he’s too accessible, and he may be trying to become more challenging. But the difficulty in art shouldn’t lie in “getting it.” The little victories that count lie in bringing those insights home.