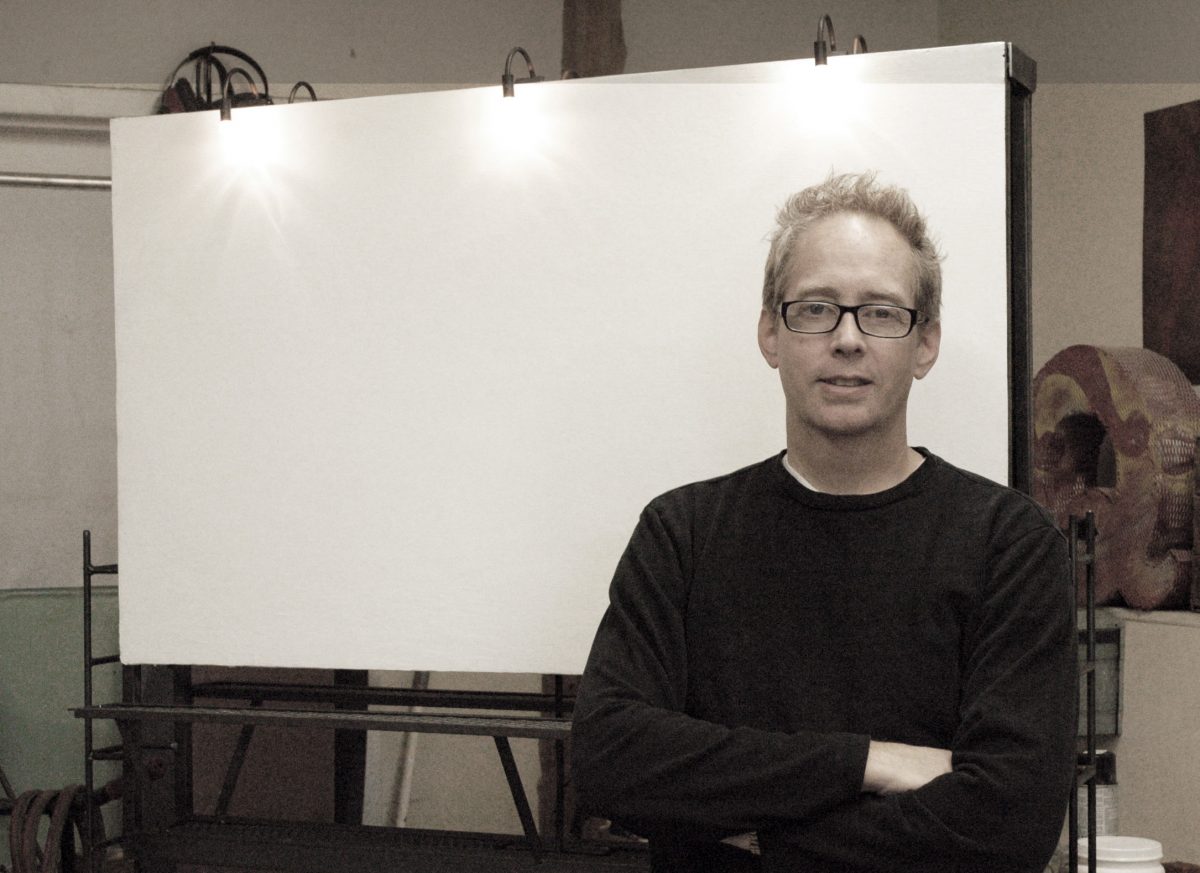 On November 15th sculptor Brian Christensen will install five outdoor works on the Snow College campus in Ephraim. Entitled Reinterpretation, the show, says Christensen, “is based on reinterpreting and finding meaning in materials with a previous functional life and history. Each piece has elements that evoke a shadow of its past life. These elements are blended with associations drawn from my own memories and history in a sort of reincarnation.”

Reinterpretation is a common theme throughout Christensen’s work. Where many artists identify themselves with a specific medium, the BYU sculpture professor says he’s simply an artist who responds to ideas. “I’m not super tied to a medium. I guess you’d say I’m more of just a general artist than I am a sculptor even,” he says, “because I’ll get an idea that I want to put across and I’ll use whatever medium comes up.” 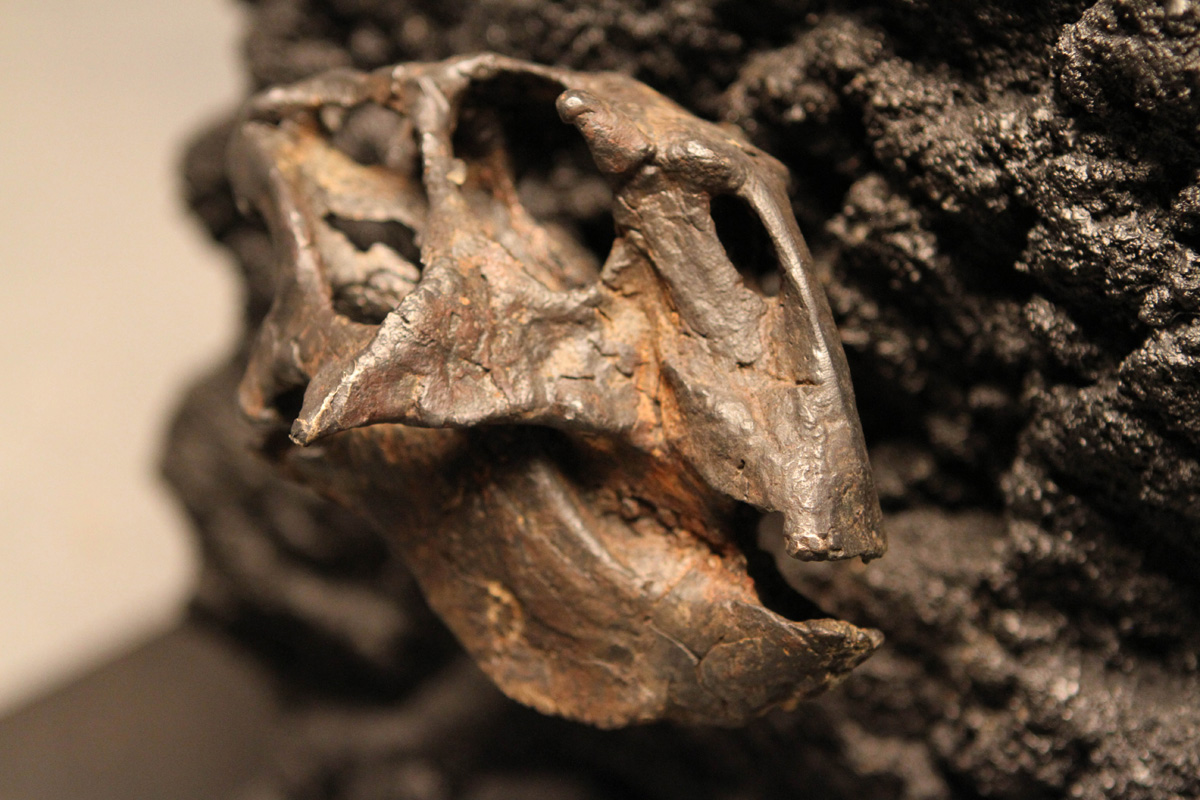 As a child in San Diego, Christensen showed an early interest in art and imagined himself becoming a painter. But even at a young age he showed interest in a variety of working methods. His first exposure to 3D processes came from the shop where his dad worked as a dental technician. “That was always just a fun thing for me to go there, and my dad showed me processes of various kinds for fabricating things,” he says.

Christensen moved to Provo at age 13 and continued taking art classes, but it wasn’t until he enrolled at BYU that he was reintroduced to the possibilities of 3D art, primarily through ceramics professor Von Allen. “Sort of a light went on that my way with things was working with materials, and clay in particular,” Christensen says. “I fell in love with how clay could look like absolutely anything. It can be made into things. It can be made into a painting. It’s somewhere in between a paint and sculpture material, because you can literally liquefy it and paint it onto something, or it could be hard and sandable, or it could be pliable. There’s just all these aspects of it.” 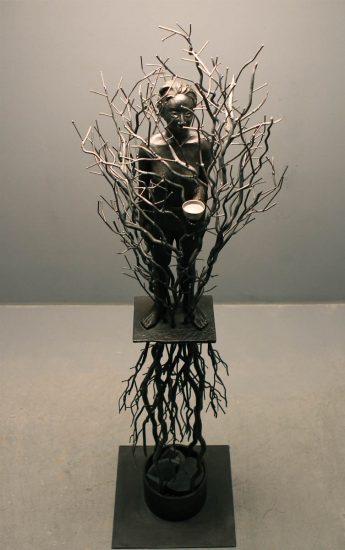 “The Waters of March” 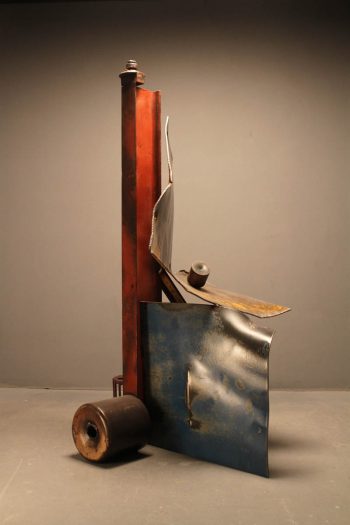 With his newfound interest in clay, Christensen completed his BFA in ceramics in 1990, and went on to receive an MFA in ceramics from Washington University in St. Louis in 1993. Shortly thereafter he began teaching at BYU, where a new world of materials opened up to him. “I got my job at BYU right out of grad school, and right away when I had a shop available to me, I started expanding the menu of materials that I use, so that now I’ll use casting of various kinds, using anything from plastics to bronze.” 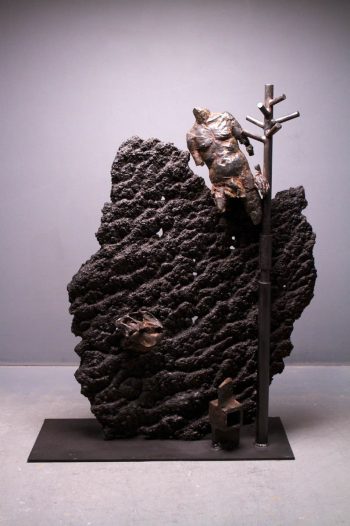 Over the years Christensen’s work has included ceramics, steel, plastic, bronze, glass and found objects. He often employs a variety of materials in a single piece. He refers to a recent sculpture, “The Waters of March,” as one example.|1| “At one point this was just a cast figure that could be just a piece in and of itself. That’s the only thing that’s cast out of bronze. Everything else is forged out of steel. So I’ll combine materials that way. It’s a good example of how I started with the casting and built an environment for it.”

Although Christensen doesn’t consider himself a conceptual artist, concept often dictates the form of his work, including the materials he uses. He cites a variety of 20th-century historical influences from the formality of movements like Constructivism to the concept-driven representation of Surrealism. “What it boils down to is that I work in a range between representation and formalism. … It’s almost as if I’m taking, say Anthony Caro and Marcel Duchamp, and … it will range from being similar to those guys to actually blending them in some cases,” he says.

Christensen’s stylistic range includes non-objective formal work, such as “River Rouge,” as well as more representational figurative work, as in “The Waters of March” — and everything in between. “Gusher” represents elements of both styles. “In “Gusher” I’m using figurative elements in a fairly arbitrary and formal way, just the way that I would arrange and balance elements in a purely non-objective composition. So despite [“River Rouge” and “Gusher”] looking a bit different, there is some cross-over,” Christensen explains. “I’m not a conceptual artist and I’m not a minimalist — not like the piece is a sort of self-contained spectacle, but rather a collection of balanced parts.” 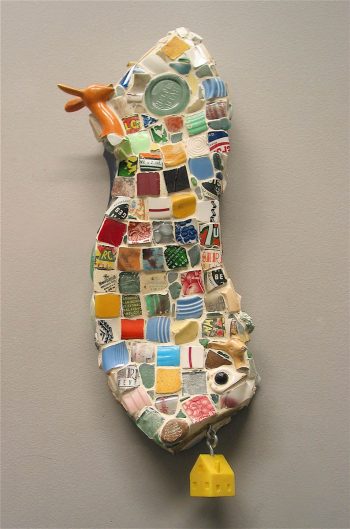 The word “collection” describes not only his finished work, but also an important aspect of Christensen’s working process, where found objects play a central role. “Materials are important. Just to take “River Rouge” as an example, I’ll try to find materials that can’t be reproduced. [The piece is] made out of heavy plates that I couldn’t have altered that way in the shop.”

Christensen’s penchant for collecting things informs and inspires his artistic process, where often an idea or series of ideas will form around a particular object. “The central object might be like a found artifact, or it might be something that I render realistically and it acts as a centerpiece, like a brain or a life-casting of a hand. I literally treat those things as if they were found objects, even if I made them,” he says.

Some of Christensen’s recent work, including “Provo Strata,” incorporates ceramic and glass shards he found at the site of Provo’s old incineration plant. “It’s literally an archeology site, although it’s recent history — 50 to 75 years ago,” he explains. “It gives you this really verifiable insight into Provo’s culture: what housewives valued in terms of color, and the memories that people have with these specific soda bottles and advertising and so forth. … The authenticity of those actual objects is really important.” 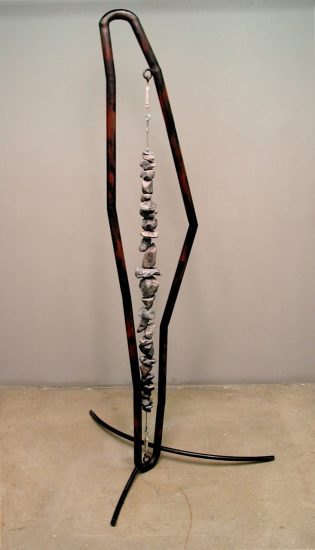 From everything he’s picked up, both physically and stylistically, Christensen hopes to provide a rich viewing experience for his audience. He describes his work as “hopefully something that you don’t read as a one-liner, but rather that you come back into it and take different things away from it.”

With this in mind, he tries to imbue the work with layers of meaning. “If it’s readable in a glance for me … I feel like it will be the same way for other people,” he said. “And if I have layers of meaning, going from formal aspects to psychological aspects … I think that they on some level translate to other people as well.”

His interest in psychology stems from a desire to reach viewers on an emotive, even sub-conscious level. “I’m interested in universal narratives. … So what I’m after is an image that not only has meaning for me, but can become a sort of touchstone or an archetype that will get at elemental and universal feelings and emotions that other people will perceive or feel rather than consciously identify with. … I want to set up a sort of authenticity or legitimacy in form and concept that might affect somebody on the inside,” he says.

This interest in psychology and meaning has found expression not only in a variety of materials, but a variety of media as well. Christensen collaborated with BYU graphic design professor Brent Barson on “Precept,” an installation which used sculpture, sound, text, lighting and space to question how the mind perceives various stimuli. Christensen said he has more ideas for installation, and in the future may branch out into video and projection as vehicles for expressing his concepts. 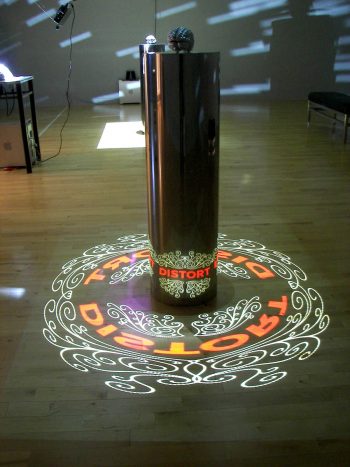 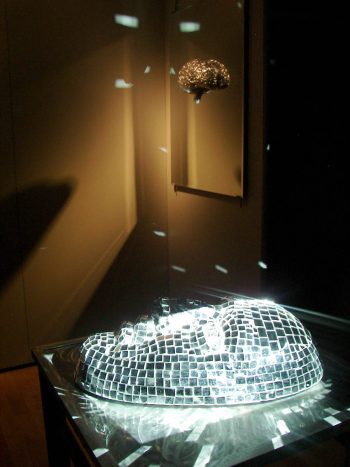 What Christensen says in reference to looking for found objects applies not only to what he’s picked up along his artistic journey, but also to what viewers may pick up from his work: “Once in a while you find some great things. The search is part of the art.” 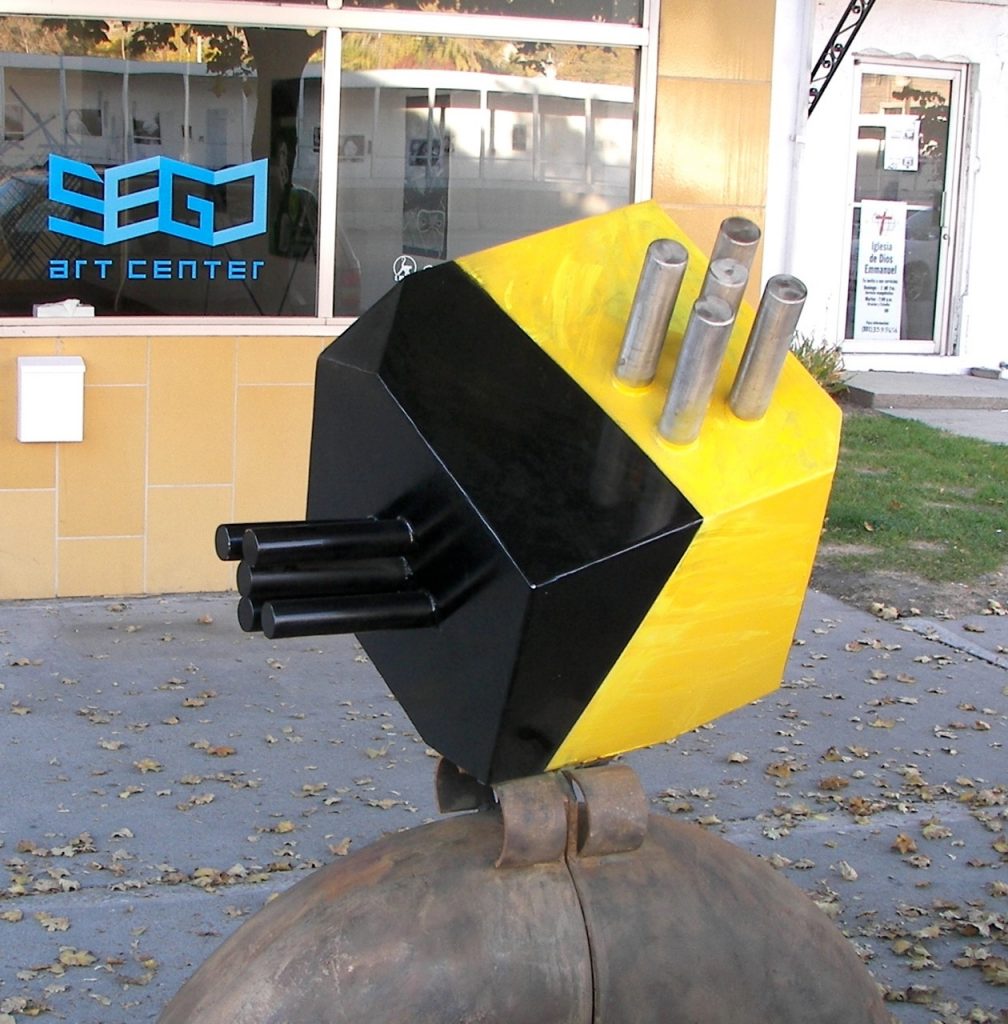 A reception for Reinterpretation will be held in the Snow College art building Friday, Dec. 10, 6–8 p.m. The work will be exhibited through February 2011.