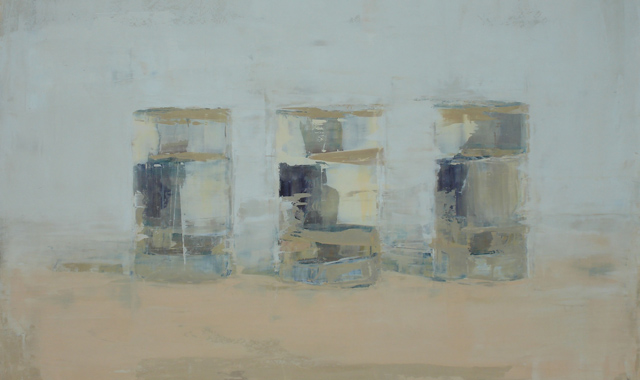 Brian Blackham was planning to leave his Guthrie studio early last Friday – heading home to paint the bathroom as a surprise for his wife (seems an artist’s work is never done). He did, however, make time for an interview with 15 Bytes.

The couple will open their Elizabeth Street residence August 22 for the Art Access Artists’ Home and Studio Crawl, to help raise money for an essential presence in our community. Because Blackham is represented only by Dolby Chadwick Gallery in San Francisco and Prographica in Seattle, the Studio Crawl is a rare chance to see his work locally. Designer Sonja Blackham will have her vintage-style clothing on display; potter Ben Behunin and artist Nathan Florence are participating. Take the self-guided tour, ask questions, have refreshments, buy art.

I learned about Blackham from artist Carolyn Coalson a few weeks ago. She admires his paintings (he also sculpts in his two-room studio) and wanted me to find out more about him (it’s handy knowing a writer when you’re curious). The art crawl came up, and the time seemed exactly right for a story.

Blackham paints still life compositions of subjects such as a blue marble or a glass of water; often just a solitary image in the center of a canvas or panel. He did a whole series on water – he has a fascination with the stuff, which he says has no negative connotation (unlike “guns or naked women in various positions”) and is essential to our being. “It’s such a beautiful subject matter, the way that it interacts with the environment so it’s reflecting colors from its surrounding area and then the way that it captures light; and when water starts to get a little bit dirty it captures more light . . . and so I revisit it and try to get better at painting it.”
He paints it beautifully. “His method is impasto,” says Coalson, “but it’s not thick. It’s just raw paint. Every stroke counts. It’s about paint. What he does with it and how far he carries that.” Some of his works are small, maybe 11 X 9, “but will hold the whole wall,” Coalson states. They do have a mesmerizing impact. Undeniably, quietly, they draw the viewer in. There’s a stillness to them that is irresistible – it’s quite difficult to look away.

His groupings of objects, the way he plans them out, the shapes of the vessels, suggest Morandi to some, and Blackham is quick to acknowledge the influence.
But his sensitive minimalist work in general is most reminiscent of David Dornan, and it turns out it should be – Blackham was a student of his when he taught at the University of Utah and also apprenticed under him for two years, from 1996-98, even helping to build the studio and living quarters in Helper where Dornan teaches his well-known workshops. It was the weather, however, that was the trigger to make him want to try still life, Blackham says. It got cold when he was painting landscapes in Helper and Dornan suggested he “throw something up on a table and stay in.” The artist found it all very intriguing and that was that.

Blackham, 47, grew up in Salt Lake City, left for graduate school at Arizona State University in Tempe where he taught drawing for a couple of years, and then was away for eight or ten years but stayed affiliated with Helper in the summers.

He’s had a studio at the Guthrie for at least a decade, where he works Monday through Friday and sometimes a half day on Saturday. He arrives as early as 7:30; tries to be home by 6:30 for dinner with his wife and two “awesome” kids.

He listens to a variety of jazz while he paints, but only for a couple of hours each day.  “I like to wait until I desire to hear something and then I’ll turn it on. The focus for me happens when it’s quiet and then the music sounds awesome, but if I have the music on it takes so long to get that focus. So I try to be aware of that as much as I can,” he says. Lately Blackham has been working on four to six images in a series at a time. He uses them to influence each other on almost a competitive basis: “I’ll push one where I really like it and resolve it to a point that I like it much better than another one I just started, so then I’ll push that one until I like itbetter and then the next one I’ll push until that one’s better. And then sometimes I’ll do something where I really like that but I won’t leave it and then I try it on the next one — so they kind of seesaw. It enables a different way of working with layers, too, because of the time required for the paint to set up.”

There’s a wonderful clean finish to Blackham’s work – it’s non-glossy and appears not to be varnished, but still has a profound depth. “I use a brush and a palette knife and I use a palette knife often to smash out the texture but then also to apply a swath of color where I’d like it to be. Sometimes I use Liquin or I’ll thin my paint with Turpenoid, but I’ll use it really stiff and use multiple thin layers and then after it cures I will seal it with a wax medium so it stays flat because I like the sheen of satin flat,” he explains.

He was offered a teaching job after graduate school, but after spending a summer in Helper painting he decided to just keep painting instead – that was fourteen years ago. “It’s a business, you know, you have to navigate those waters and try to understand it.”

His first gallery was Tivoli, and that was way before college. He had done a sculpture of a telephone stand for the phone in his apartment with his house-painting supplies – plaster and mud and sheetrock – sort of an upside-down robot’s leg – and friends kept telling him it should be in a gallery. Finally, he drove around town looking for one of those. And stumbled on Tivoli, where they took a look and offered to take the piece on commission – even asked for more work, which Blackham didn’t have. So he started messing around with plaster at home and then decided to study sculpture at the U where he later also became enamored of drawing and painting. He got lucky, he said, “We’re talking top-tier art school.” Dornan, Tony Smith, John Erickson, Sam Wilson, Paul Davis . . . the list went on.  Best part of the story? Given all the exhibits Blackham can boast, from New York to Santa Fe, Tivoli Gallery in 1992 is still proudly listed on his resume, even though the piece didn’t sell.

Now, he works at getting better at what he does, which he says is skill as much as art. “I’m practicing my golf stroke every day — showing you the significance of balance and placement and the way that objects look in light . . . I am trying to get better at presenting the thing that I find beautiful, and what I find beautiful is trying to re-create what already exists, and that’s light on a surface in space. It’s really that simple, but it seems so complicated.” You can view more of Brian Blackham’s works on his Facebook page.