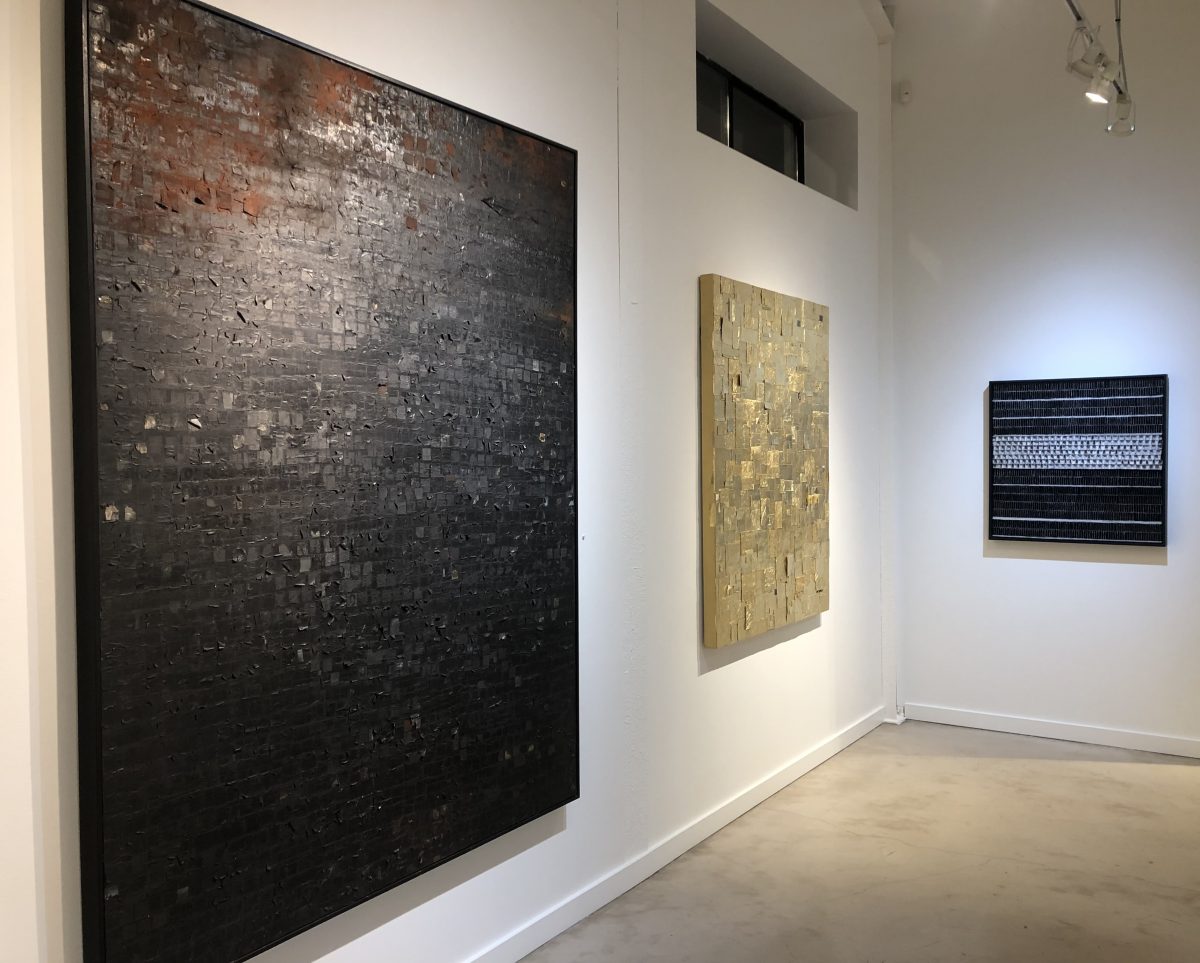 Installation view of works by Donna Mintz (left and center) and Brenda Mallory (right) in What Once Was at Julie Nester Gallery, photo by Geoff Wichert

Personal identity is one of the most influential issues of the day, one with its essence to be found in memory. Recalling not only what has happened, but what we felt like then is how we create a durable sense of who we are. In the 21st century we have unprecedented aids to memory, tools like digital photographs that offer convenience Polaroid could only dream of, and computers that promise instant access to what should be our immortal data. Yet trusting such assistants places memory, and with it identity, in entirely new peril. “Cloud complacency” has us cruising towards potential disaster, and anyone who has tried to open a 20 year-old file may testify that, for all their utility, digital memories — illegible numbers stored as magnetic traces —  are uniquely fragile, subject to irretrievable loss. In a shared exhibition that opened at Julie Nester Gallery in Park City on the final weekend of 2022, Brenda Mallory and Donna Mintz contemplate this dilemma and find renewed faith in one of humankind’s oldest and most reliable forms of memory: visual art.

Though she lives in Oregon, Brenda Mallory is a familiar creative force to anyone who frequents this gallery. She generally employs unique samples of found and salvaged materials, often industrial cast-offs but always made from natural materials that she enhances with paint and encaustics. These suggest a rich array of contemporary metaphors of the sort that elevate abstraction beyond ornament while continuing to explore the sophisticated representative suggestions that keep making it relevant. Although she has begun to re-present some of these sculptural forms in fine prints, some of which is seen here, her work most characteristically runs along the boundary between flat images and bas-reliefs. When assembling these history-rich natural materials she prefers to use steel fittings — precision nuts and bolts — that contrast with the fibrous look of fabrics and processed paper. Thus her chronological memories go like this: raw plant matter like jute or wood pulp has, by the time it reaches her, been industrially transformed into durable forms that she further modifies with natural and manufactured waxes, resins, and paints. The metal parts and framing add still more history, invoking the way natural and machine processes flow together like the tributaries of a river. “The forms look like they might have grown out of the earth or have been found on a forest floor,” she writes, but “the contrast of crude mechanics and beautiful, natural forms opens the viewer to multiple levels of meaning.” 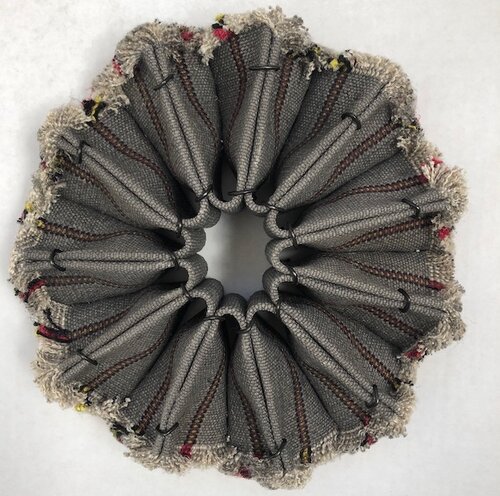 Mallory was able to use the down time of the pandemic to make the blending of these processes more subtle, enhancing the ornamental qualities of her work and making her techniques less apparent. An example can be seen in the “Firehose Experiment series,” in which she has cut up worn out canvas fire hoses and arranged them in geometric patterns. The texture of the cloth hose, its woven-in linear marking, and the pattern of fraying on the ends combine with metal staples in pieces that recall a whole range of plant and floral shapes and even invoke such architectural elements as gothic rose windows. A series sharing the title “Reformed Packing” utilize the types of three-dimensional grids that are produced to contain and organize large numbers of manufactured items. Here Mallory’s wax and paint applications make these structures durable while upsetting their rigid, identical nature and making them look like naturally occurring or zoomorphic structures: wasp nests would be one example. Their visual rhythms bring to mind the way calendars organize days, weeks, months, and years, or the pages of journals and diaries sequence lifetimes, all emphasizing how certain patterns repeat within a life or from one to the next. 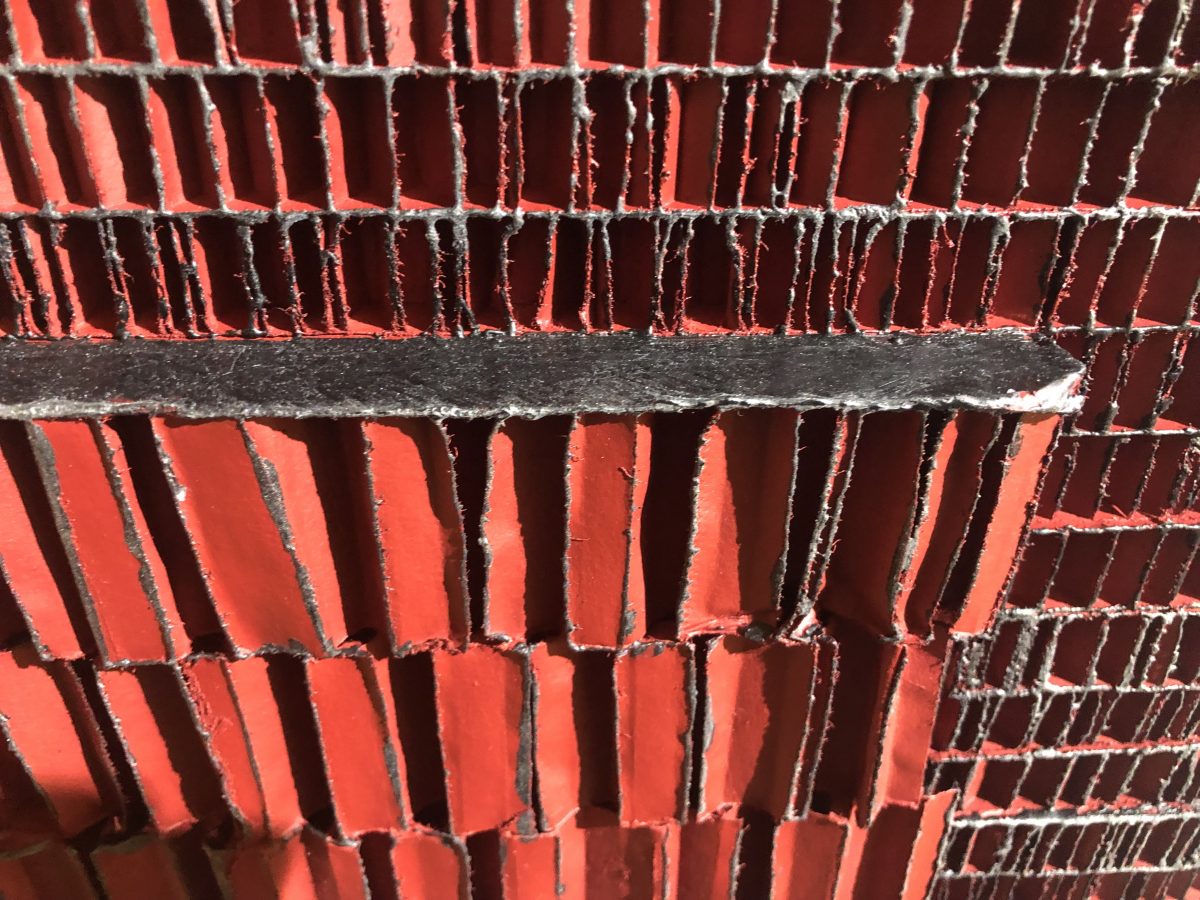 Detail of one of Brenda Mallory’s “Reformed Packing” works, photo by Geoff Wichert

Shown intermingled with those patterned constructions, Donna Mintz exhibits works that take a very different approach to memories, one that Utah audiences should find more familiar, even though its roots grew in ancient cultures and it came to fruition in the European middle ages. Reliquaries may be thought of as precious boxes, often made of gold and decorated with jewels that make them like jewelry themselves, shaped like the body parts of saints or other admired personages, meant to contain the parts they represent. In those cases, they represent the holy relic, which may thus be kept from mundane visual exposure that might make them seem less otherworldly. Sometimes, to be sure, they include windows that allow the contents to be viewed, and in modern times, especially in Utah, a later style of reliquary had followed that development, operating more like the way a pedestal holds a sculpture or an ornamental ring does a particular jewel, supporting the relic or relics and presenting them for visual inspection and whatever recollection or imaginary reconstitution they then stimulate.

Mintz was born and lives in Georgia, where she has written extensively about both art and literature while making her own art on subjects and themes related to memory. Over time, she says she accumulated a large quantity of written materials — perhaps drafts of work that changed shape radically while under development or complete works that for some reason never left her possession. All art making tends to involve a good deal of such production: sketches, trial efforts, alternative approaches that were eventually cancelled. While some can be regarded as plain failures, many seem as good, as virtuous, even, as the preferred work that replaced them. What Mintz came up with was the idea that, rather than destroy them, as some creative persons do, or filing them away for possible study by some future academics, she would turn her surplus texts into works of visual art: specifically reliquaries. Like medieval examples, hers would externally resemble what they contained but simultaneously conceal, gild or be made to resemble tarnished and aged versions. 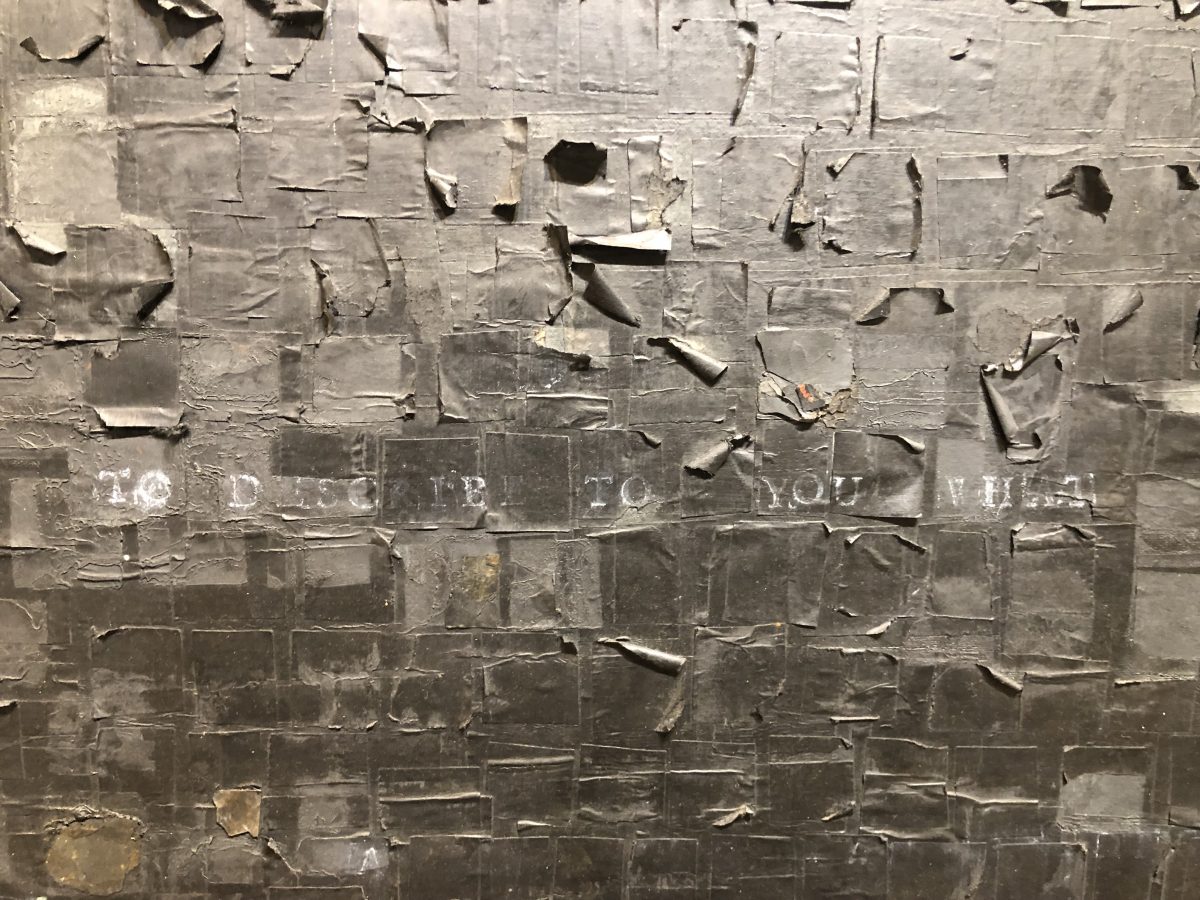 Detail of a work by Donna Mintz, photo by Geoff Wichert

One thing that is probably not apparent in the photographs shown here is how large these are, ranging up to seven-feet tall. Also better seen in person is the range of textures, tile-like pieces, and variations in color even over a large expanse of gold. Occasionally letters or other “leakage” of the linguistic contents appear in ghostly fashion. Mostly, though, it is the overlapping shingles or scale-like bits of covering that become their lively and suggestive covers, like mosaics that are built up of decorative materials covered in gold leaf.

What constitutes the glory of both these artists’ works are their surprising three-dimensional qualities: the depth of Mallory’s grids as one system overlies another, or Mintz’s peeling and yet still building layers. They remind us that events happen twice in our lives: once in real time, and again (and again) as imagined and reconstructed in our memories. And they do so in ways that we can see not just with eyes, but with the sense our eyes give us of how it feels to caress the passing moment with that most intimate of our five senses: touch.

What Once Was: Brenda Mallory and Donna Mintz, Julie Nester Gallery, Park City, through Jan. 17