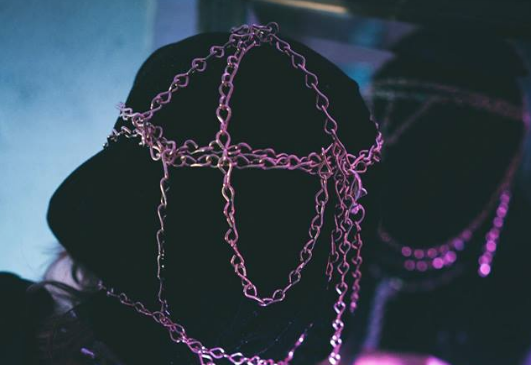 After a few years of struggling to reinvigorate community interest, The Gateway is finally finding itself, as a home for a surging independent art scene. The former outdoor mall’s empty storefronts, which have become host to the Great Salt Lake Fringe Festival, provide unique performance venues for all disciplines.

ACKNO wledge & accept was one of actually two shows I attended at The Gateway this weekend. The show was billed a “multidisciplinary dance theater performance,” at the Wasatch Theatre Company locale (at first a secret location, when tickets initially went on sale). The brainchild of Breeanne Saxton, of Ririe-Woodbury Dance Company, ACKNO was a collaboration with Georgia Patterson, Andrew Alba, and Ava Lux that, though brief, provided a sensory, queer, and intimate experience.

My senses were immediately overwhelmed upon entering the space. Attendees were asked to read a lengthy intellectual property agreement (and were filmed while doing so), swab our cheeks, and take a (non-alcoholic) shot, creating a strong sense of intrigue. I did anticipate these elements’ incorporation into the performance in a more involved way and was disappointed to find this not to be the case; but in combination with the fog, eerily ambient music, intense lighting, and crowded space, I was satisfactorily disoriented.

Then the performance began. Billed as a dance theater performance, I anticipated ACKNO would contain some narrative. However, I actually found the most intriguing parts to be the moments during which I forgot a narrative was taking place. A sense of desperation and observation were palpable throughout. Patterson, performing the role of “ACKNO” (at times, I was interested in this character changing hosts), began with a frenetic entrance, bursting into the space and digging through a suitcase. Multiple times, the smaller venue gave rise to an immediacy of feedback, creating an intimacy that led to realism. Patterson had to chug an entire bottle of water and put eye drops in, and there was no way of faking that. This created a belief in her true embodiment of ACKNO; not just as a performer, but as an identity.

Saxton inhabited the role of the “extra-terrestrial special interest group,” beginning the show as part of the landscape, with a camera lens instead of a face. Even as her alien character appeared to de-mechanize, Saxton inhabited it with a calmness, even an antipathy, yet with much control. This was true throughout, as she also controlled the piece’s sound cues: maybe she was out of commission, yet was ultimately in charge of the entire experience.

Both Saxton and Patterson moved remarkably similarly, exhibiting a fluidity and ease when rising and falling from the floor, with reaching limbs and immense control to make such movement appear effortless. While inhabiting a similar choreographic vernacular as Saxton, Patterson’s role as human ACKNO was heightened and almost caricatured through her use of expression. As much as her body was constantly shifting, so too were her eyes, which darted, her mouth agape as her focus shifted. In contrast, Saxton’s expression was revealed completely through her movement. Even in moments of release and emotion, the manner in which she changed costumes felt methodical, if not careful and entirely rooted in her physical experience.

Most intriguing was an interview sequence between ACKNO and the extra-terrestrial. In what also felt like the queerest part of the evening, bodies were shifted (or snatched, as in body snatching) as each dancer experimented with the other’s body in a way that was both meticulous and dangerous. Each knew where the other would be and exactly how much risk to take, clearly the result of practice, yet the sequence still felt new and spontaneous. Saxton’s gaze on Patterson kept her in control, yet seemingly out of control at the same time. During moments of embrace (though “embrace” here feels trite), each seemed to inhabit the other with a sexual tension, a danger, and a desire to be, and also to control, the other. Violence toward one another was also careful; more of a testing of limits than a desire to destroy.

As ACKNO ended, it felt much too brief. The entire audience turned back toward the stage, anticipating more, as the dancers left the space. Speaking with audience members after the show, some expressed that the performance felt like a set-up, a flashback, or a vignette, but truly the beginning of something. While it’s always good to leave the audience wanting more, I left feeling unsatisfied, though in the best way possible. I hope ACKNO is the beginning of a series, or at least a longer exploration, as the show’s disorientation and authenticity truly piqued my interest.