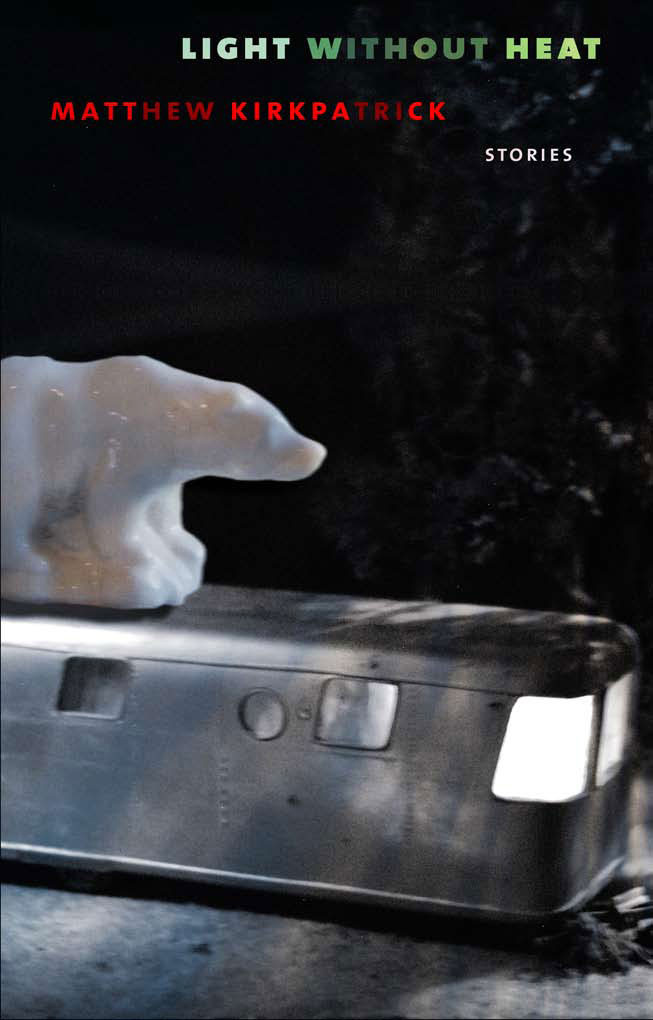 Break glass for a unique reading experience. Matthew Kirkpatrick’s Light Without Heat: Stories really should have some such label stamped onto the front of it. Perhaps it could, quite literally, be set into a fitted box with a glass top, a window. Perhaps, best of all, a band wrapped around it that could be cut before the reader opens the cover for the very first time, which would be particularly appropriate because it would be reminiscent of a time when the pages in a book’s signature had to be cut apart on the outside edge before the new owner could begin reading. Regardless of the book’s presentation (it actually is a relatively orthodox trade paperback published by the University of Alabama’s not-for-profit FC2 impression), Kirkpatrick’s collection of short stories, or perhaps I should call them ‘pieces’ to be more accurate, offers the reader something new.

The academic questioning of the privileged role of the author in relation to his or her work began in earnest in the late seventies when Cornell University Press published Textual Strategies:  Perspectives in Post-Structuralist Criticism, in which was an essay by the world’s smartest bald man, Michel Foucault, titled “What is an Author?”  Among myriad other useful philosophical contentions, Foucault suggests that the author is actually, in more ways than one, an impediment to the transmission of a story. He gets in between the ideas as he’s conceived them and their full and successful transmission to a reader. The product of his time and the culture in which he lives, the author has been shaped into a certain type of man on account of his social environment, and such shaping limits how he is able to transmit ideas and concepts to his readers.

The real sweetness of Light Without Heat is that Kirkpatrick’s project, here, seems to be to reconsider his own participation in the construction of the pieces in this book. He seems to be attempting to decentralize himself as the work’s author, and create, within the book, a richly textured culture where the ideas he entertains, the philosophies he wants to explore, can freely expand (to whatever extent possible) without doing so within the limitations that they might inadvertently be subjected to, were Kirkpatrick’s voice in the work more authoritarian. His readers are, for all intents and purposes, given the reins, finding a narrative, yes, but also discovering, within, a landscape made up of a series of photographs, a glossary, a diagram, and a list. One section is made of up dual voices.  One section liberally plays with erasure. Kirkpatrick provides his readers with the light, and expects them to bring their own meaning to the text.

“Different Distances” doesn’t just point to inconsistencies of the authorial voice, but also to the unreliability of memory itself. In a dreamlike reverie, the reader slips and slides around in the unnamed narrator’s past, but also in his or her own, latching on only to fixed points that seem to punctuate the narrative, and is left feeling as if he or she has watched a series of home movies in a basement somewhere without knowing any of the people on the screen. The characters become anyone; they become everyone.  Kirkpatrick’s sentences rattle out in the darkness in short, controlled bursts, emerging as if from a reel-to-reel projector, in flashes of light, slipping in and out of focus on the white sheet hung from the far wall. He punches little holes in the nebulous space of his narrator’s history, articulating what his memory will hold onto, but seems, at the same time, to be equally interested in both what is remembered and what has been forgotten.

In “Light Without,” our attention is drawn, again, to the notion that language, like memory, is interchangeable. The author and reader, alike, can cohabitate within the confines of a written text, swapping signification like the babies in Kirkpatrick’s maternity ward. Also appearing in the same space is the unnamed young woman who steals magazines from the local convenience store, subsequently replacing them on the rack, but not before inserting herself, like a reader, into their pages, creating her own meaning by way her play with their text. Is the reader outside the text, passively collecting its information like radiation or is he or she inside the text actively engaged in the process of applying meaning to the written words found there. It is a jubilant meditation on placement, of positioning, as the author’s obsessive magazine cutter and the reader, alike, must think about the space they occupy in relation to one another, as well as to Kirkpatrick as the author.

If Kirkpatrick has spent much of his time in Light Without Heat thinking about participatory narrative, and has thought much about the shared responsibility of the author and the reader, the book’s fifth piece, “The Saddening,” seems to playfully point to commercial fiction that continues to maintain the author as god mythos that predated Post-Structuralist literary theory: it contemplates the reduction of literature to a product, and suggests that commercial fiction writers like James Patterson or Nicholas Sparks are a type of literary prostitute that the promiscuous reader can go to for a quick fuck. We engage in a carefully calculated exchange of a sum of money for a dose of a particular type of emotion.  The experiences that the reader pays for may be different (romantic, exciting, frightening, erotic) but the exchange is conducted in the same way. The stories may change, but the scaffolding upon which they’re built is the same. The protagonist of “The Saddening,” Champion (our champion?), pays a prostitute to engage him emotionally. “Cry for the children and their mother and the dog that died in the fire,” he tells her in the story’s opening.  She weeps, and “he leaned forward in anticipation of authentic sadness.”  It is all a type of emotional voyeurism.

In a more direct author/reader interaction, “The Most Amazing Attic” is a sounding into the dark space of the reader’s imagination. “The AuralSec Story A Corporate History, Chapter 7:  Our Dependable Grampy” reads like a hilarious internal corporate memo about product misuse, another fault line between the creators of a product and its use by a customer (“He claims that it’s not his fault that people were hitting the red button when they wanted to hang up instead of when they wanted to defend themselves”).  In the extraordinarily innovative “Pastoral,” the reader is expected to quite literally participate in the construction (or reconstruction, depending upon how you look at it) of the story.

All of the component pieces of Light Without Heat flash and flare into conscious and subconscious space, and it’s all Kirkpatrick’s readers can do to remember the outlines of the narrative images of each burst of light, like a long series of photographic still shots blasting away, generating metanymic associations  and unspoken, unwritten truths. Just when Kirkpatrick’s readers may feel as if they have a grip on any aspect of this brilliant book, some tight little piece of information that may lead to revelation, it slips away only to reappear, to manifest itself differently, written, erased, rewritten. Kirkpatrick shows his readers how to participate. The only way to find truth in these pages, he seems to say, is to play the creative game, to share narrative culpability.  He has given his readers all the white space on the page, has led them into the creative space of narrative responsibility, has invited us all to “kneel, gather the pieces and cut our fingers.”

About the Author
Matthew Kirkpatrick is the author of the short story collection Light without Heat and the novella The Exiles (Ricochet Editions, 2013). His writing has appeared in many literary journals, including Web Conjunctions, Western Humanities Review, DIAGRAM, the Notre Dame Review, Unsaid, Five Chapters, and Denver Quarterly. He earned his Ph.D. at the University of Utah, and is an assistant professor in the English department at North Central College in Naperville, IL. He divides his time between “Chicago” and the Eastern Shore of Maryland. Light Without Heat was a finalist for the 2013 15 Bytes Book Award in Fiction.