Branded and On Display 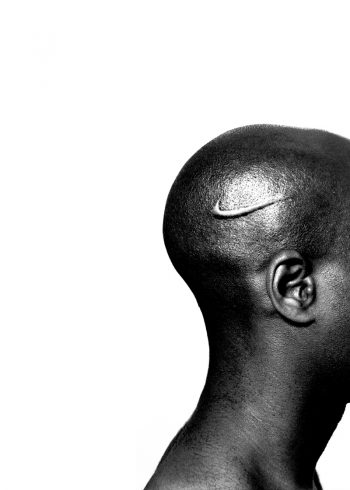 Look around you, wherever you are; inevitably your environment is littered with a plethora of visually annoying logos. As I sit in my chair at home I count 10 branded items. These logos are either recognizable names, or a character as familiar as a letter in the alphabet. While walking downtown, pausing to count every seven minutes, I tally an average of 20 brands and logos.

What is the artistic merit that we give to these items? Do we relate the logo to the product or have we been so inundated with these images that the branding and the product have relatively no connection? Are our own egos and identity so immersed in connecting ourselves to the worth of the logo that we totally discard their meaning and instead use them as a reflection of who we are and our place in society?

These are among the questions asked at the Salt Lake Art Center‘s new exhibit, Branded and On Display. Though none of the pieces actually provide an answer to any of these questions, the exhibit does present an important dialogue as to what can be considered art and what is simply another ploy to relieve the public of its money through visual recognition.

Playing with a viewer’s visual identification with an object is by no means a new or unfamiliar idea to the art world. Already in 1917 the line between product and art was addressed by Duchamp’s readymades. With the addition of the artist’s brand – “R. Mutt” – a common urinal in mass production at the time became “Fountain,” a work of art. In the 1960s Andy Warhol’s Brillo Boxes, Heinz Ketchup and Campbell’s tomato soup, brought the consumer product into the exhibition space.

More recently, we have seen this process reversed, with a sudden surge of product placement where we would least expect it — in the arts. For instance, now that television is quickly becoming obsolete, an unassuming public is downloading free movies, plays and serials onto their computers and ipods. Because the public is trained to believe that these are stories unto themselves, we would never know that they are actually built around a product(s). A single logo will be seen as many times as possible in these shows. To get the consumer more comfortable with purchasing a product, the dialogue will purposefully incorporate the names of these products. We become so used to seeing these that they become an accepted part of our surroundings. 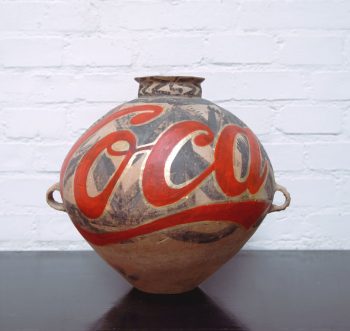 This is evident in “Branded Head” by Hank Willis Thomas. He presents us with a photograph of someone’s head, shot in profile. The Nike SWOOSH logo seems to be embedded into the subject’s skull through scarification. The most provocative message in this work is that the character is “faceless.” In other words, the profile is of the back of his head instead of silhouetting his facial features: the message being that we become faceless when we are indoctrinated with logos “on the brain.” Just like the films that seem to hide the commercialism of a product by making it so obvious that we get used to seeing it, here the viewer is not immediately conscious of logo recognition. Instead, the viewer is drawn into the work by the stark contrast of value and design.

Throughout Branded and On Display we witness advertising appropriating from itself. This is a very popular trend in marketing. It’s as if from large corporations to smaller companies, logos have been copied over and over again because advertising executives know what “works” visually to get positive feedback: AKA “more money.”

This casual morphing of logos is presented very clearly in “Pageant” by Diller +Scofidio. Diller + Scofidio transform a 3′ x 3′ ft floor space into a continual loop of logos that morph into each other. This visual treat is great evidence that most of the easily recognizable logos, brands and symbols worldwide are very similar. They are similar in shape, font and line style but more importantly; their similarity triggers a response in the consumer that causes us to feel comfortable with our need to consume. 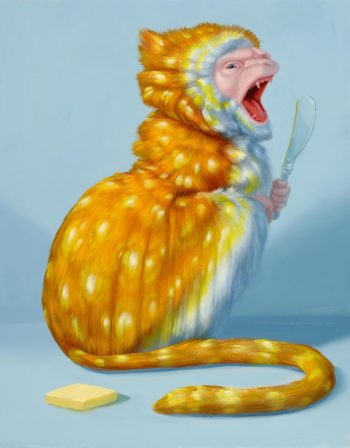 This last U.S. election was the catalyst of change for the Pepsi logo. Why? The Advertising branch at Pepsi assuredly convinced the company to change its look to resemble the Obama logo so it could profit from the votes for the new US president. We rarely take notice when a logo has changed. What we do notice is when our peers, our meaning, our ego is reflected into a visibly recognizable image. The new Gatorade commercials “What‘s G” don’t ever actually show the product being sold. They don’t even try, as many commercials have over the past decades, to sell a lifestyle. Instead “What’s G” evokes an ethos, almost a sense of spirituality. If, as many argue, art filled the spiritual vacuum left by the waning of the religious life at the beginning of the twentieth century, advertising may be trying to do something similar to art at the beginning of this century.

It is tempting to suggest that advertising and art perform similar functions in the world, and this is what has led the artists in Branded and On Displayto make these works. But it may be more accurate to say that they are opposite mediums. Though they both share a visual space and can have powerful visual recognition, art will always be more refined than branding. Branding can attempt to reflect art in many ways, but art will never be branding. While conveying their pieces through metaphor or irony, each work in this exhibition stands alone in the quest to challenge the viewer to examine the line between the two.


Branded and On Display, organized by the Krannert Art Museum, University of Illinois at Urbana-Champaign, is at the Salt Lake Art Center through May 23.