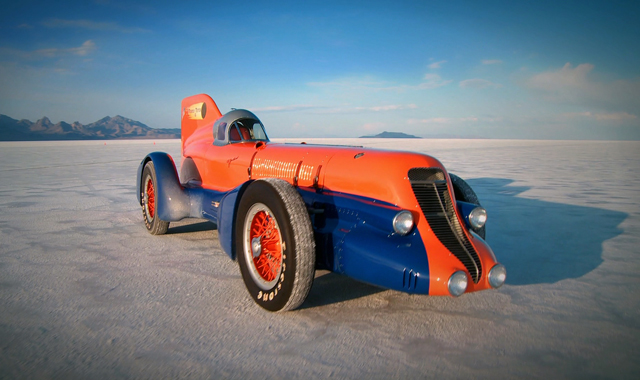 Before you go to the Utah Museum of Fine Art’s Speed exhibit, opening on June 2, we recommend viewing this documentary. You don’t need to be a car-racing enthusiast to enjoy this complex family story of dreams, disappointments, successes and sacrifices. From the opening shots and music to the unfolding of the story we experienced many ‘wow’ moments and eagerly anticipate seeing some of the actual machines that were in the film.

Boys of Bonneville: Racing on a Ribbon of Salt, which took four and a half years to make, tells the story of the late David Abbott (Ab) Jenkins, the race-car designer and driver who set numerous speed records on the Bonneville Salt Flats in the 1930’s and ‘40’s. We met with the film’s creators Curt Wallin and John Greene to get a sense of what it was like to make a documentary that spans 90-plus years, and can’t help but marvel at the synchronicity, trust, industry and plain good luck that got the film to what it is today.

After Utah businessman and philanthropist John Price purchased Jenkins’ iconic Mormon Meteor III car, he asked Wallin to create a documentary. The project began as a simple 20-minute video documenting the car’s engine rebuild by Ab’s son Marvin (Marv) Jenkins. When Wallin went to Southern Utah to meet Marv, who had raced for and with Ab as a young man and loved the Mormon Meteor as much as his father, he was only expecting to get some general background for the film. But during the visit he discovered there were reels and reels of footage and a hip-high stack of scrapbooks with newspaper clippings about the man, his son, and the cars. It was on an all-but-forgotten top shelf of a closet.

With Marv’s permission, Wallin sent his soundman to New York to have the footage restored. Recognizing the impossibility of insuring such historical material, Wallin bought an extra seat on the plane for the large suitcase holding all the reels. Upon viewing the restored footage, Wallin realized there was a much bigger story than the engine rebuild, so he approached Price about expanding the project. Showing great trust in Wallin, and a deep commitment to the historical value of the documentary, Price, who according to Wallin turns into a kid when he’s at the racetrack, agreed.

Wallin was joined in the expanded film project by John Greene, a producer Wallin had worked with before, who was then leaving Salt Lake’s Channel 2. The pair realized that in all that footage of car racing, one year was missing – the first year. Appeals went out on the web, which produced a video from a previously unknown person, completing the story.

In due time Greene assembled a three and a half hour timeline and rough cut (no easy task), which was then given to Michael Chandler, an editor in Southern Utah, who juggled the pieces around to create a smoothly flowing story. They drew from Ab Jenkin’s 1937 article in the Saturday Evening Post, and a book he wrote (The Salt of the Earth) to create the narrative. Actor Patrick Dempsey, who also races cars, took on the role of Jenkin’s “voice” after seeing an early cut of the film and identifying with the hallucinatory sensations encountered in racing, as skillfully rendered by Greene and Wallin. The sub-title of the film, “Racing on a Ribbon of Salt,” was Ab’s description of the motionless and hallucinatory sensation felt when on the Bonneville Salt Flats.

That the film was finished too late for the Sundance Film Festival in January seemed unfortunate, but since Wallin and Greene knew that many film festivals run in the spring and summer, they went to Sarasota and about 30 other festivals, winning some of them. The film was shown at the fairly new DOCUTAH, an international documentary film festival in St. George. Ab’s grandson and extended family saw it there. While many family members were skeptical, wondering what purpose was served in making the documentary, Wallin says he felt re-affirmed by the general reactions after the screening. Because of this film, family members were able to follow the lives of Ab and Marv from the 1920’s on, and finally accept the previously resented expenditure of family finances to keep the Mormon Meteor alive. Their succinct opinion was, “You did right by Ab, by the history, by us.” The film’s timing was particularly poignant since Marv died during the last phases of filming the documentary.

So . . . John Price collects antique cars and loves racing. He knew Wallin, who met Marvin Jenkins, who had all the memorabilia. Walllin knew John Greene, and recruited him for the expanded project. Patrick Dempsey knew car racing and signed on for some of the narrative. The Jenkins family became quite close to the film-making team, took a trip down memory lane and got a sense of closure. And WE, the general public, get to watch the life of a racing legend unfold and see many magnificent machines at the Museum of Fine Arts.


Boys of Bonneville: Racing on a Ribbon of Salt is available for purchase on-line and at the UMFA Museum Store. “Speed,” which features 19 antique cars, including the Mormon Meteor III and actor Steve McQueen’s Jaguar, is at the UMFA June 2 – September 16.