Both Sides of the Coin: ARTsySTEM’S exploration of art and science at the Nora Eccles Harrison Museum of Art 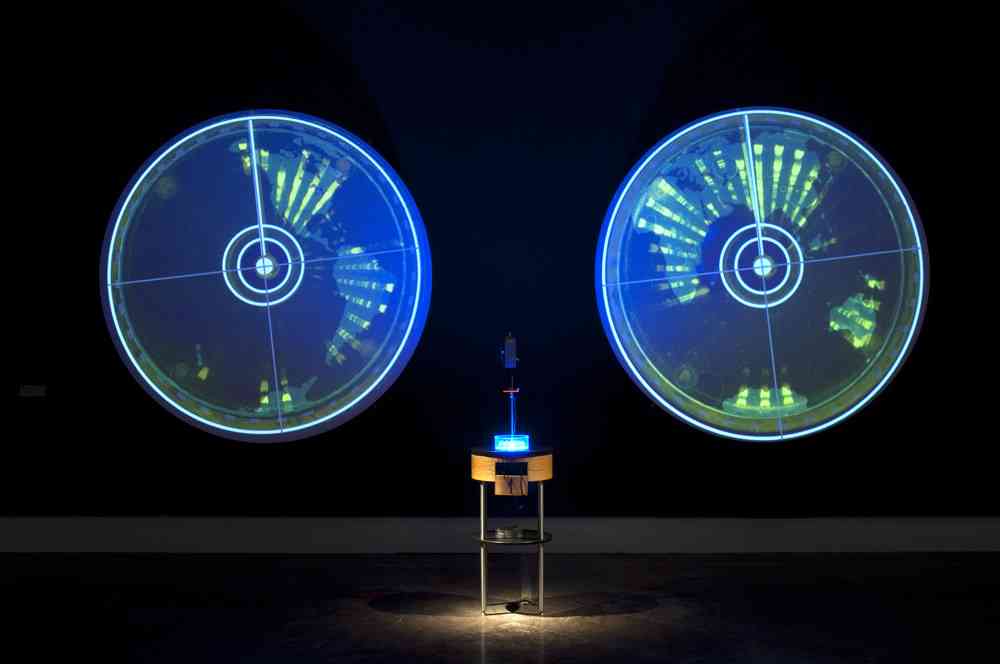 It’s not exactly nostalgia that makes antique scientific paraphernalia attractive. Not usually windows into our personal pasts, these carefully crafted tools and specimens take viewers on a journey into the collective history of exploring and deciphering the only planet we know. Two artists who have mined the aesthetic appeal of these artifacts are Mark Dion and Brandon Ballengée, both currently on exhibit at the Nora Eccles Harrison Museum in Logan. In Dion’s monumental “Travels of William Bartram Reconsidered “(2008)—which was also in The Smithson Effect, UMFA’s sprawling 2011 celebration of the influence of Spiral Jetty’s maker—collections suitable for natural history museums skirt the boundary between objective observation and subjective interpretation. Such academic conundrums matter less to Ballengée, who is a biologist and environmentalist as well as an artist who makes direct efforts to awaken in others his passionate concern for the living world. “Tears of Ochùn” (2012) focuses on shrimp, a popular food and so a well-known example of a vulnerable species, and, as the title suggests, links the timeless, universal experience of mourning to present-day events. “Danse Macabre” (2014) tracks the intricate interaction of a species in stress and the opportunistic parasites that are destroying it: an increasingly common story and a necessary reminder that beauty in nature can just as easily accompany death as signify life. Closer to home, “RIP Utah Lake Sculpin”(1991/2014) recalls a rite in which the artist cut the image of a local, formerly common but now extinct variety of fish out of a field guide to the species, then burned the image and placed the ashes in an urn made from a laboratory bottle. The exquisite page of engraved fish, from which Zion’s ‘share’ is pointedly missing, graphically makes the point that a subject of Utah stewardship no longer exists.

Everyone knows that truth does not belong to science alone; it’s just as much a goal of art. Yet how many know that beauty, art’s primary goal, is also crucial to science? The difference lies in emphasis: while artists may seek truth in beauty, scientists seek beauty as an attribute of truth. When two responses seem otherwise equal, scientists will choose the shapely equation or the symmetrical theory, working from the insight that we find truth beautiful in itself. The exhibition ARTsySTEM: The Changing Climates of The Arts and Sciences, at the Nora Eccles Harrison Museum of Art until August 1st, sets out to show both sides of this coin: both the potential for scientific activity as a source of art, and art making as valid collaboration with science.

Working before the invention of a reliable clock, Galileo probably used his musician’s skills to time motions crucial to his experiments. Leonardo da Vinci perfected his drawing while limning the behavior of nature. While it’s not clear how or when this synergy broke down, there’s no time to waste putting it back together. We live today in a crucial moment, when no human endeavor is more pressing than getting scientific knowledge right. Where our species historically has depended on the ability to move to the next place when this one could no longer support us, and counted on the seemingly limitless capacity of marginal lands, atmosphere, and ocean to absorb our wastes, there are no more pristine valleys over the hill, and we’ve exceeded the environment’s ability to absorb our poisons. Scientists struggle to convey the extent of the problem, while artists, who rely on their ability to communicate with an unseen public, often lack the sophisticated knowledge that would make their concerns convincing.

On a fundamental level, the same drive to observe the natural world drives both artists and scientists. ARTsySTEM acknowledges this with contributions from artists whose subjects, permitted more traditional representation. Edward Weston, perhaps the first photographer to present nature precisely and holistically—as an ecological scientist might do—is represented by “Soil Erosion, Carmel Valley” (1931), a Modernist photo meant to capture the formal qualities imparted to land sculpted by water. Seeing it today, it seems every bit as much an environmental statement as Harry Reuben Reynolds’ untitled landscape of the part of Cache Valley known as ‘the Island’ in its pristine condition, in 1950, before development forever altered its original state. A more sophisticated take on this view of nature appears in James Turrell’s “Roden Crater,” a project far ahead of its time when Turrell, whose life’s work explores the role of light in giving form to the world we see, began it in 1974. The documents here, including maps, elevations, and a mind-bending scale model in a custom-built carrying case with an aerial photo in the lid, primarily reproduce the geometry of a conic crater inside a cinder cone, a view into either the remote past, 400,000 years ago when the volcano was active, or an even more desolate future. Either way, viewers should realize that this bleak bit of real estate typifies countless features on a vast majority of planets that remain inimical to life. Curious viewers will want to explore “Roden Crater” online, where an impression of the grand, literally consciousness altering visual effects available to visitors may be found. 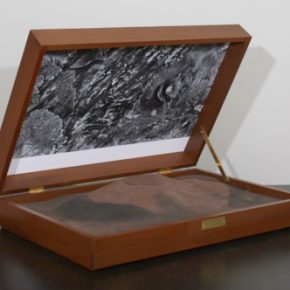 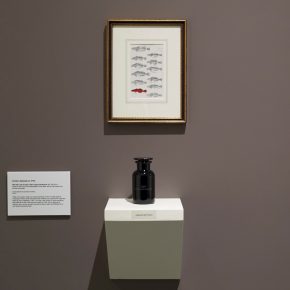 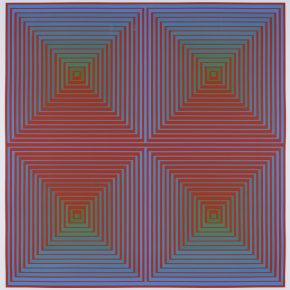 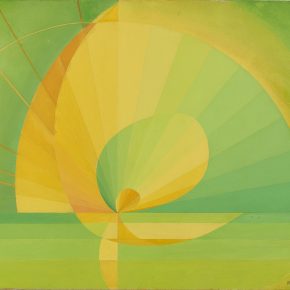 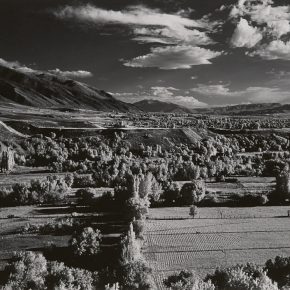 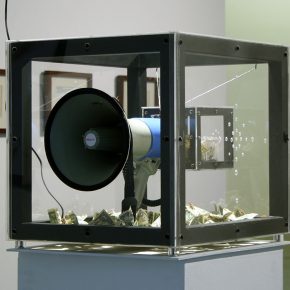 On another level, science provides rich and complex subject matter as suitable as any for visual representation by artists. Mario Reis used sediment-rich river water to make the nine evocative squares of “Nature Watercolor, Logan River” (1998). More ambitious and differently atmospheric, the “Ocular Revision” (2010) of Paul Vanouse looms over the gallery in a way that recalls photos of both big science—the Large Hadron Collider in Switzerland is the largest experimental apparatus ever built, due to the U.S. government’s decision to cede basic research to Europe—and big art: Roden Crater would not fit in the gallery, but the entire museum could fit in Roden Crater. Yet it also reveals an essential difference between the two disciplines. “Mona Lisa” belongs to Leonardo forever; if someone alters it, the result doesn’t qualify as art. Even if the vandal is Marcel Duchamp, and the result is “L.H.O.O.Q.“ (1919), the original stands. Contrarily, anyone with a valid contribution can bring a hypothesis closer to becoming a theory. Vanouse wants to liberate DNA research from the accepted way it’s visualized: the familiar field of bars resembling a product code, so often seen in dramas and documentaries. He wants to find a way of representing these molecules that is closer to biological reality, resulting, so far, in the circular patterns shown in this video projection. Should he succeed, his procedure may well make the transition from art gallery to laboratory, hospital, and courthouse.

Among the more surprising, even paradoxically exciting works here, Channa Horwitz’s mathematically formed drawings, meant to visualize languages, sounds, and intervals of time without reproducing their sensual impressions, seem to have anticipated the way computers would later influence some of the ways we see. Like one of Jackson Pollock’s drip paintings, “Eight Expanded“ (1980) refuses to lie flat on the wall and remain a collection of lines. Instead, it seems to coalesce and animate in the mind of the viewer as it travels across the page, casts its own shadow, and grows another segment. Viewers will draw their own conclusions as to whether, as the artist argued, stringent discipline liberated her to find a freer way to make art. But in the 1980s, when hyperrealism sought to find out how closely an artwork could cleave to optical expectations, Horwitz was finding the other end of the spectrum of abstraction, and in the process effectively replacing reproduction with visualization.

Horwitz is one of several artists whose abstract depictions of abstract subjects, coming at the end of ARTsySTEM, invert the realistic depictions seen on the way in. Here Hilaire Hiler combines mid-twentieth century psychoanalysis with color theory in “Parabolic Orange to Leaf Green” (1942), while Anna Campbell Bliss employs her characteristic combination of mathematics and optics—software and wetware, in today’s parlance—in “Spectrum Squared”(1973). Modern art and literature have been criticized for failing to include more recent forms of knowledge, but ARTsySTEM demonstrates both the value and the potential pitfalls of trying to include knowledge that has not yet achieved, and in fact may never reach, the level of common knowledge. When America’s most popular television reporter remarks that no one can explain why the ocean has tides, and no one in his audience objects, artists may be excused for choosing not to trust the public’s knowledge. Yet if the history of art proves anything, it’s that beauty, whatever its relation to truth, rarely depends on understanding.

Many contemporary or post-modern artworks use graphic or visual components in a manner that might traditionally have been labeled ‘illustration,’ and a valid question arises as to what comes first: does the art need an explanation, or does a text summon up visual clarification, as Tom Wolfe argued in The Painted Word. Nothing in ARTsySTEM agitates for specific actions, for which artists and curators alike should be praised. Instead, the exhibit engages in dialogue with viewers on a variety of levels. One artist who labels his perspective ‘critical’ is Derek Curry, whose installation “Viaticus Par Eximo Sermo “(2010), translated as “money is free speech,” compares political interests to species of insects and features a loudspeaker set inside a box of cash. While it feels closer to activism than art, Curry would probably rather spend his energy on debating the issues he raises than on what to call the way he raises them. He would not be alone in believing that if nothing changes, there may be no more arts to argue about . . . or humans to debate them. Perhaps the final word should go to Allison Kudla, whose diptych “Manicured Field” (2011), employs living plant tissue to grow her images. Things have come a long way since Helen Mayer Harrison and Newton Harrison set out to forge an ecological art in the 1970s, when even the term ‘ecology’ was brand new. ARTsySTEM does a yeoman’s job tracing how art has responded to this challenge, a feat made more impressive by the sheer number of significant works that came from the Nora Eccles Harrison Museum’s own collection. 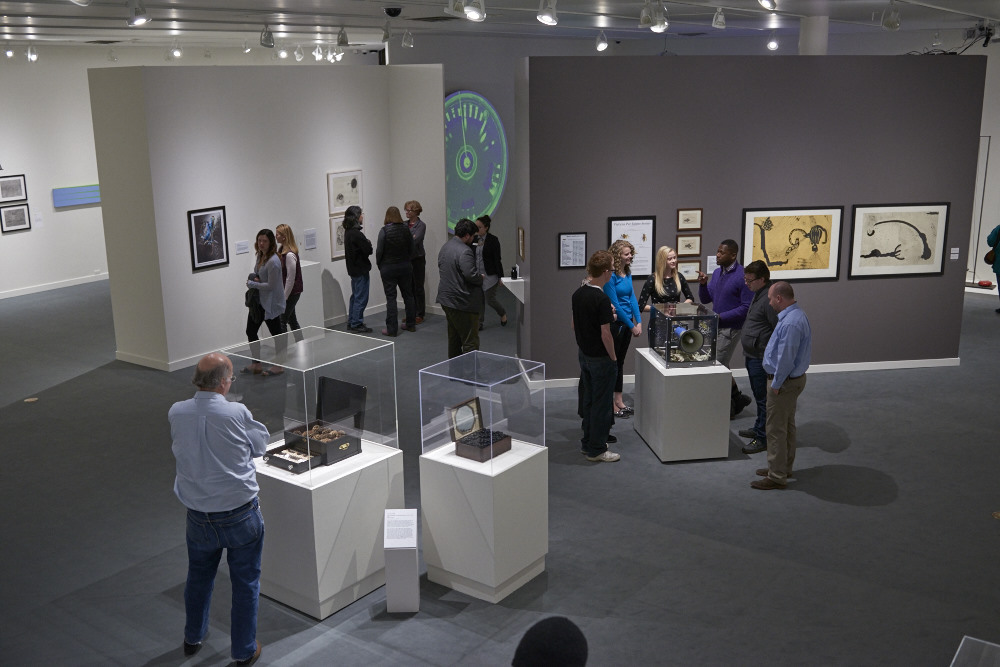