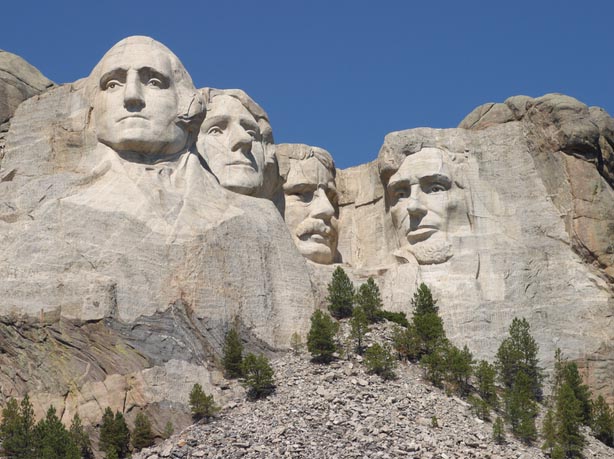 No one who has ever seen the movies “Close Encounters of the Third Kind” and Hitchcock’s “North by Northwest” can deny that they have a fascination with Devil‘s Tower and Mount Rushmore, and I am no exception. I have owned an Infiniti with one of those gizmos that maps out destinations, and one day while waiting (I don’t wait well) for my wife, Linda, at Nordstrom I fooled around with the GPS thing and mapped out a car trip to these two famous U.S. landmarks. I quickly realized that they are within 100 miles of each other. I hatched a plan to travel there by car, especially since we hadn’t taken a car trip, outside of one to Las Vegas, for years. So, in early July we packed, avoided making any reservations, loaded up the ice chest and headed to Devil’s Tower. I won’t bother with the details in between point A and point B because there aren’t any. With apologies to residents of Wyoming, I think whoever designed the state decided to put all of their efforts into two places — Devil’s Tower and the Tetons — and left the rest for another day.

As Linda and I approached Devil’s Tower on our second day of travel, I immediately morphed into Richard Dreyfuss and had visions of driving my car through fences and fields in pursuit of this grand example of nature’s art. This giant monolith’s grandeur is enhanced because it dramatically shoots upward in contrast to the surrounding, rolling hills. There are not many trails in the area, with the best being one that encircles Devil’s Tower at its base. We were particularly delighted to see rock climbers — no UFOs — scaling the sheer face of the north side of the monument. Our time there was joyous and although I will probably never make the long pilgrimage again, whenever I see “Close Encounters” I will have a perspective that not many afford themselves.

The next day Linda and I continued to our final destination, the Black Hills of South Dakota and Mount Rushmore. Our first sighting of the carved four presidents that make up the monument was sacred. It seemed like all of the postcards, documentaries, history book reports and movies quickly came together and left me silent. During our visit I learned a great deal about the origin of the monument that faces Mount Rushmore and its indomitable artist/sculptor, Gutzon Borglum. I don’t think many Americans would associate the name Borglum with Mount Rushmore, let alone realize that he came from Danish parents who had converted to the Mormon Church and traveled the vast distance to the Utah Territory in 1864, settling in what is now the Bear Lake region of southern Idaho. Gutzon (born, John Gutzon de la Mothe Borglum) was the product of his father’s second plural wife, the sister of the first wife. When Borglum’s father became disaffected with the Mormon Church, the jealousies of the two sisters, and the squalid sod-home, he removed his family to St. Louis, Missouri, where he studied to become a homeopathic doctor. Because the Borglums were now outside the protection of the Utah Territory, and therefore outlaws because of their polygamous lifestyle, Gutzon’s mother left the family and the children in the care of her sister. The circumstances of her leaving are unclear, but the children were directed never to speak of Gutzon’s mother, Christina.

Gutzon was raised in the Midwest and amid the Wild West shows, Pawnee Indians and other characters of the West he discovered his talent for sketching, painting and sculpting. Fast forward to 1891 when Gutzon was studying in Paris at the Academie Julian and Ecole des Beaux-Arts, two favorite training destinations of early Utah artists. Gutzon spent the next couple of decades painting and sculpting across America and his artworks are now housed from the Springville Museum of Art to the Cathedral of St. John the Divine in Manhattan. His art even made it to his old training ground in France. His famous statue of Thomas Paine in Paris, was commissioned in 1937 by a memorial committee consisting of several people you may have heard of: Helen Keller, Albert Einstein, Bertrand Russell, Margaret Sanger and former French Premier Edouard Herriot.

Borglum is likely best remembered for his two largest artworks, Stone Mountain, outside of Atlanta, and Mount Rushmore, a short distance from Rapid City (remember the movie?). The cameo-like depiction on the side of Stone Mountain was created by Gutzon, but due to a falling out with the sponsors and promoters, all Klansmen, Gutzon left the project. I have seen the finished product and although it is quite a stunning portrayal of Robert E. Lee, Stonewall Jackson and Jefferson Davis, it cannot compare to Borglum’s masterpiece, Mount Rushmore. This project began with South Dakota state historian, Doane Robinson, who, with an eye on tourism, invited Gutzon to tour the Black Hills, proposing that he carve several likenesses of American heroes. After much discussion and searching for the right promontory of granite, Gutzon settled on the present-day site. Borglum would carve the monument honoring Washington, Jefferson, Lincoln and Theodore Roosevelt on and off for some 17 years, until his death in early 1941. Gutzon’s son, Lincoln, who had worked with his father in many capacities on Mount Rushmore, would continue another seven months on the sculpture until funding was depleted and Congress declared the monument complete. It was two months before Pearl Harbor and the U.S. entry into World War II and there was no hope of additional funds to finish the presidents as Gutzon had envisioned—in full profile.

An additional project, the Hall of Records, was commenced late in 1938 as an 80-foot tunnel, intended by Gutzon to lead to a large room in which records would be deposited “of what our people aspired to and what they have accomplished should be collected and preserved.” Gutzon reasoned that future generations might not understand the full significance of what the figures that he carved represented. “You might as well drop a letter into the world’s postal service without an address or signature, as to send that carved mountain into history without identification,” he asserted. The Hall of Records, located out of sight and behind the carved presidential heads, was completed and dedicated in 1998, housing only a small vault that contains 16 enamel panels that capture the text of the Constitution, Declaration of Independence, descriptions of the four honored presidents and various other historical details.

Mount Rushmore is as much a monument to the genius of former Utahn, Gutzon Borglum, as it is to the presidents he sought to honor. That Gutzon could effectively express his art in small sketches, painted murals, freestanding sculptures and bronzes testifies to his high ranking among American artists with Rushmore as his zenith.

Linda and I drove away from one of the grandest art attractions extant that hot July day and returned to Utah. Rushmore remained punctuated in our minds as we crossed hundreds of miles of otherwise barren land. I’ll never view two of my favorite movies in the same way again. Remember that name, “Gutzon Borglum,” and make it a household word.