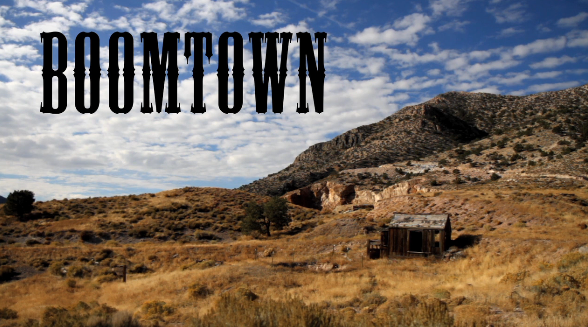 Directors Torben Bernhard and Travis Low breathe life into a relic of Utah’s past with Boomtown, their short film showing this week at the Big Sky Documentary Film Festival in Missoula, Montana. In competition for the “Big Sky Award” given to best documentary focused on the American West, their twelve-minute film is the only one I have seen. Its story follows the well-known arc of a former Western mining town’s rise, heyday, and fall. Truly unforgettable, though, is the taut portrayal of Frisco, Utah as it unfolds through gorgeous cinematography, evocative sound, and expert research. Bernhard and Low recreate Frisco’s stunted history in a film short on length yet long on resonance.

Silver mining was a boom business in Utah in the mid-1800s, no more so than in Frisco, situated on the southeast side of the San Francisco Mountains, west of present-day Milford. Transportation and industry went hand in hand as Utah’s railroad system expanded statewide. After the transcontinental railroad opened in 1869 across northern Utah, additional lines and extensions were laid: in 1871, the Utah Southern railroad line was extended from Salt Lake City to points south, reaching Frisco in 1879 via the Utah Southern Extension.

As with other towns, rail transportation facilitated quick growth. At its heyday in the early 1880s, thousands inhabited Frisco as hundreds of men were employed to mine silver and ore in the Horn Silver Mine. The town included a hospital, general store, and multiple salons – it also saw lawlessness and multiple murders as residents grappled with a rough life on the frontier. Voice-overs by former residents tell the tale of a town full of promise, then laid to waste as the mining shaft, then mountainside caved in. One of the more poignant passages is heard as a female resident recounts making a life in a region short on natural resources: “Everything you had, you couldn’t raise anything up there, there was nothing. When I look back and think about it, why, it must have been quite a trial. But we never thought about it, because that is what we had to do and we did it.”

The film opens with a broad view of the landscape. It takes a moment to discern the material remnants of Frisco’s former life: signs of human habitation and toil are represented by dilapidated wooden structures, the abandoned mine, and beehive-shaped stone-structured charcoal kilns.  Amidst beautifully framed ruins and rusted material objects strewn across the land, the only living creatures we see in Boomtown are a tarantula skirting across the grass and a bull snake slithering across a gravel path. The once forgotten graveyard holds just a few of the town’s many dead. Yet it is a few past residents who bring the town alive to the viewer as the film seamlessly incorporates historical information through written text, audio tracks of interviews with former residents, and historical photographs – all granting us a glimpse of a functioning society in its prime.

The inscription “Gone, but not forgotten” is etched on the side of stacked stones. Bernhard, Low, and their crew assure us with Boomtown that Frisco will not be forgotten. My only regret in Boomtown is its length. The film left me wanting more of everything it has to offer: our history retold through the beauty of expert film making; the remembrance of a lost, minimalist life surrounded by the sound of high winds and cawing birds; luscious images of rolling desert vistas drenched in golden sunlight, covered in brush and sage. This is the story of just one former Utah town in many, a story which can – and I believe should – be told time and again as we grapple today with the same issues as yesterday: how to make a go at living on these awe inspiring, sometimes forbidding, Western lands.