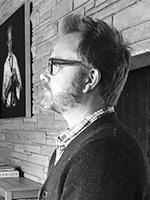 Tim Erickson’s new book of poetry, Egopolis, is not about to greet you at the door with a plate of cookies when you come knocking. There’ll be no sitting on the sofa while the poet regales you with warm and comforting narratives and aphorisms. This book is mostly uncomfortable chairs and cold marble and black tar and trompe l’oeil. There are unexpected juxtapositions and triple entendre. As soon as you begin to settle in with your translation app and your Greek and Roman mythology Wikipedia entries, Erickson says, oh, by the way, what do you know about musical composition and militaria? Nevertheless, this is a book you should definitely read, and not in a because-kale-is-good-for-you sort of way.

This is a book that amply rewards whatever level of effort you choose to give it. Should you choose not to ferret out every allusion or attempt to sew up every seam in the possible bag that is this book, may I recommend that you allow yourself to be mesmerized by the language and the sounds? Simply sit back and hear Erickson’s voice layering and quilting words for your listening pleasure. Or, with a bit more exertion and application, you might choose to pace the floor as you read, noting the wealth and variety of poetic devices, stopping now and then to jab a triumphant finger skyward as you think you might have discovered the poet doing something possibly important with the number three, could be, or maybe—I’m right, aren’t I?—the repetition of wings.

My preferred method of entering a new book of poetry, or allowing it to enter me, is through the ear. And one can get a delightful earful here. There are bees humming in “The death of Adonis”: The last bees crawl in jagged circles, and in “Nacimiento”: Masonbee fur bright with nasturtium pollen. I could listen all day to lines like, Meccaward the gooseflock flowers (“Green functions for a linearly compressible non-homogenous halfspace”), and the whole of “Memoryfull: Seattle”:

Plastic shopping bags
Or jellyfish both

Then, even if you are still milling around at the level of listening, you can’t help but begin to notice the craftsmanship of the poetry, the tropes and devices like polished strips of exotic wood species with which Erickson assembles his puzzle box. Repetition is a key device, here, and of course also a means by which a poet can point, at least obliquely, to theme. Erickson does pepper his collection with wings, for example, yet never allows us to alight upon a single representation. Yes, they come with pigeons and herons and turkey vultures, but others are laden with the darker metaphors of arrows, and missiles that flap open at launch (“Pteros”). The more I looked, the more repetitions I found—music, military, contrails, sea foam, seedpods, painting, and palms—and this is one of the central amazements of Egopolis: Erickson has left these repetitions throughout, like breadcrumbs though the deep woods, illuminating our way.

The poet’s play with form and line allows for surprising juxtapositions and double (at least) meanings. Again, Erickson refuses to allow his readers to get comfortable. One particularly fine example comes in “Green functions.” It’s a section imbued with musical terms and imagery, and yet:  The black coda five soup lines forming/ a treble clef/ Red Hats the notes. I defy any serious reader to leave those lines simply at the level of music. Or this beauty in “Intifada for Lars,” a heartbreaking poem dedicated to Erickson’s son:

And I think you’ll find, as I did, that once you’ve come so far, once you have followed Ariadne’s thread past the first turn or two, you’ll want to push on. You’ll want to dip your feet into the Greek and Latin, for example, to understand how Erickson is putting the crafts of ancient guilds—the butchers, the armorers, the bankers—up against the art and craft of poem-making, asking us to think about what sort of work is honest and worthy.

You’ll want to wonder, as I did, at the way things keep happening in threes, throughout the book: the three sections of the book itself, three divisions of the Freudian psyche, three levels of classical architectural entablature, etc. Of course there can come a point in any literary analysis when the dissertation-seeker begins to see things that aren’t there or that the poet never intended (how long, for example, does one want to poke around in Erickson’s repetition of feces and urine (faecis et urinam), beyond the fact of St. Augustine’s statement that we are born between them? Still, as legend has it, T. S. Eliot once responded quite simply to a loquacious grad student who went on at length about his intricate interpretation of one of Eliot’s poems: “Yep. You’ve got it. That’s it exactly”—meaning the poems, of course, ultimately become what their readers find and feel there, and that a wise poet will simply nod and accept any enhancements to his wisdom.

What did I find there? What do I think Erickson is up to? What does he say with this book that is important enough to demand this level of attention and reasoning and leap-taking? Plenty. Even from the epigraph of the first section of the book, taken from a poem by Guillaume Apollinaire, the poet presents the idea of a fallen Eden, un printemps de passé, the passing of a season or idyllic era. The speaker in the first poem of the book, “Canto fermo,” speaks of being Greek under Rome, and there are other references that paint ancient Greece as a high point in civilization that became subsumed by a militaristic, less noble Roman Empire—what’s a Greek to do? Many of Erickson’s poems carry this disappointment—no, that’s too soft—this bitter disillusionment, forward to our own day, to contemporary civilization’s failure to evolve beyond a might = right mentality, to our rampant mistreatment of the environment, and our obsession with technology.

But Egopolis never becomes a screed. Erickson simply shows us the false world he believes we have painted—a crasser and lesser society—pentimenti over the more real and richer layers below, and then leaves it to us to decide if or how deeply we will dig.

We are allowed to see the poet searching for a way to craft a city-state, a polis, for himself, for his own ego to live and write within. How does a person carve out a sane and meaningful niche in a civilization that works against those aims? How does a father create a safe haven for his son, how does a poet write something of beauty and permanence, how does a human maintain his humanity?

Yes, heavy themes indeed, and Erickson doesn’t shy away from them. He makes them seem like precisely the sort of ideas we ought to be wrestling with; and, for my money, he makes it well worth the work it takes to get at them. Perhaps Erickson’s own lines in “Microclimatology” best describe the difficulties inherent in attempting to make the distasteful palatable—even turn it into art 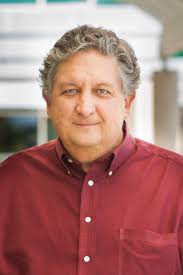 C. Wade Bentley is father to four and grandfather to six amazing humans. He can be found most weekends walking the Wasatch Mountains. He teaches and writes in Salt Lake City. His poems have been published or are forthcoming in many journals, including Cimarron Review, Best New Poets, Rattle, American Literary Review, Southern Poetry Review, Poetry Daily, The American Journal of Poetry, and Poetry Northwest. A full-length collection of his poems, What Is Mine, was published by Aldrich Press in January of 2015.