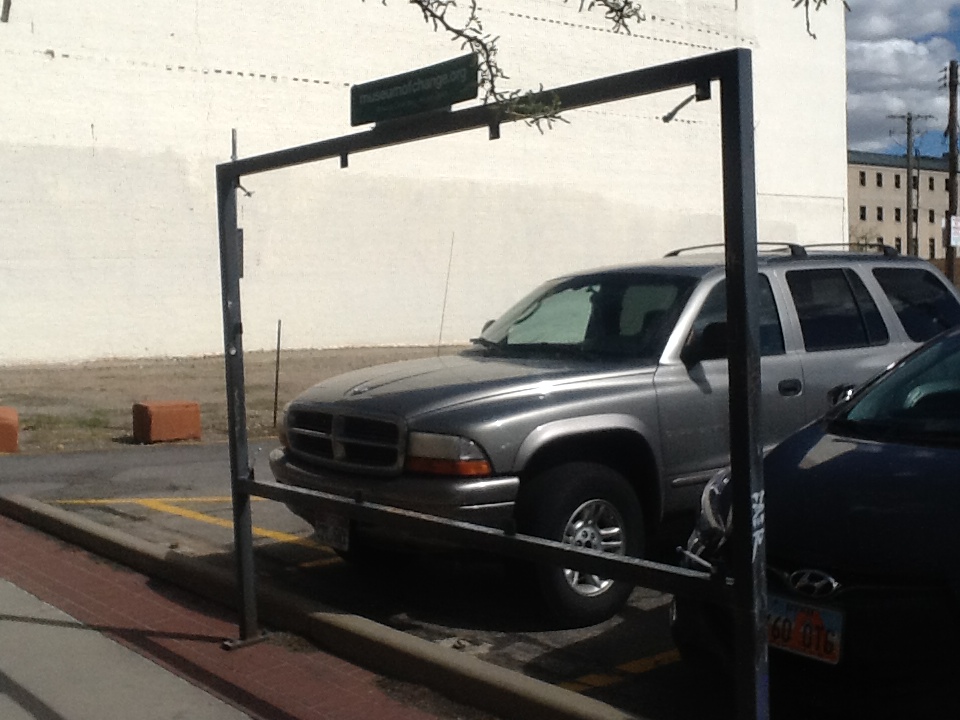 For the past several weeks, TMPC’s frames have provided structural support for thirteen large posters designed and installed by Urban Art Lab. But when, at the invitation of Urban Art Lab co-founder Charlott Greub, 15 Bytes went to check out the project last week, we discovered ten of the thirteen frames are now naked, their image-posters: MISSING.

Which is a shame, because these posters are meant to continue the discussion about SLC’s cultural values, and how these values are on display in the development and building-out of the “spaces_between.”

Two years ago, the opening of the City Creek Center, made concrete some cultural values its critics dub: Suit-Centric Materialism. But Greub, and her partner, Joerg Rugemer, want Urban Art Lab to be a catalyst for a conversation about the design of the rest of downtown, and other values. 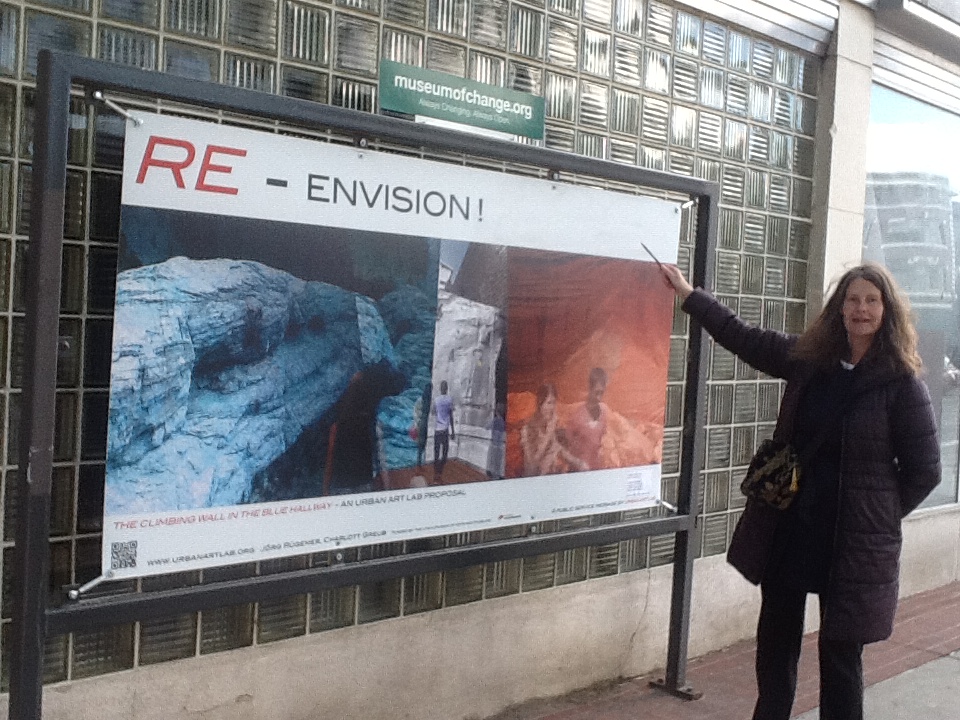 Charlott Greub of Urban Art Lab points to one of the organization’s RE-ENVISION posters along Salt Lake City’s West Broadway.

If you’re interested in seeing the “spaces_between” become venues for poetry, painting, and bare-shouldered creativity, then you should join Urban Art Lab’s conversation, which is now focused on blocks sixty-nine and seventy: the two blocks just south of the City Creek Center (West Temple to State Street and 100 South to 200 South), an area many hope  becomes the City’s “Culture Creek.”

RUMOUR reports that a couple of years ago “movie-mover and shaker” Geralyn Dreyfous was prompted by Zion Bank’s “ideas & integrity-centric” president Scott Anderson, to meet with Greg Walker, who is active in the Young Architects Forum; and that Dreyfous inspired Walker to use his network to start a conversation about the future of blocks SixtyNine and Seventy, and how these two blocks could be a bridge from City Creek Mall to the rest of downtown, and reflect SLC’s diverse and vibrant values.

Walker, who is now starting his own company, WOW Atelier, suggested an international design competition to inspire creatives around the world to propose innovative-images of a future for 69/70, and in January 2013, the Anderson-Dreyfous-Walker thought seeds sprouted with the announcement of an international ideas competition: SIXTYNINE SEVENTY: Spaces Between. Urban Ideas Competition.

Over 200 design-centric, image-innovators from around the world, inspired by the chance to be one of three groups to win $40,000 each (funded by grants from RDA, Zions Bank, the Downtown Alliance, and the LDS Church), submitted their suggestions for the spaces_between.

The competition wrapped up last June when three winners were selected: a People’s Choice Award went to PKM Architects of Madrid, Spain, for its “Olympic Games to Urban Games.”  One Jury Award went to AK Studios, Philadelphia, PA (URL) for its “InnerCircuit;” and the other Jury Award was given to what certainly should be the favorite of LOCAL FIRST: Urban Art Lab Salt Lake City (UALSLC), for its eponymous “Urban Art Lab.”

The four members of UALSLC are Charlott Greub, and Bradeson Brinton, both Adjunct Assistant Professors at the University of Utah School of Architecture; Jeremy Bringard, Associate, AIA, LEED AP, Intern Architect with Babcock Design Group; and Joerg Rugemer, Associate Professor at the U’s College of Architecture.

After the award, Greub and Rugemer formed a successor organization to UALSLC called Utah Art Lab (UAL2), and designed and installed the aforementioned 13 posters with their award-winning image-ideas.

And now we have the mystery of the missing mattes. A cursory investigation by a non-professional, and ad hoc team (CSI SLC?) suggests two potential causes for the posters: (1) The wind, or (2) Groupies of UALSLC or UAL2, trying to corner the market for their ouevres while the prices are still low.

As of this date, it looks like the evidence points more strongly in the direction of the wind; as the influencer of many of downtown’s iconic spaces, Stephen Goldsmith reports  “…a young woman downtown did recover 3 of the wind-blown images. They are in her apartment and will be reunited in their frames this week.”

The fun discussion about SixtyNineSeventy, particularly, and great-design for downtown, generally, should be continued, and among more people, as it would be sad to think the thought-seeds have withered and blown away; leaving empty spaces_between.

Urban Art Lab‘s WHAT IS YOUR RE, SALT LAKE CITY is on exhibit along Salt Lake’s West Broadway (200 West and Main Street) through July 14. For more information on the SixtyNine Seventy Project visit www.sixtynineseventy.com.