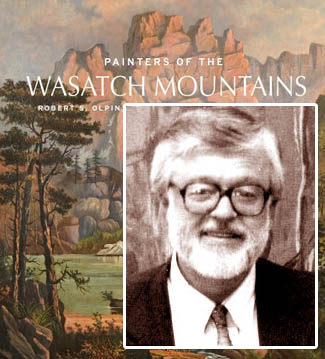 It often falls to those who knew a man less than others to sum up his life in publications such as this and Olpin’s case is no exception.

I only met Bob Olpin twice, the first time in the spring of 2002, and the last just a couple of months ago. But it was actually some years ago that I was first introduced to the bearded raconteur of Utah art when, late one night, I was flipping through the TV channels and came across his telecourse Art-Life of Utah.

This eighteen part series, created for the University of Utah and chronicling Utah art and society from its inception to the present day, shows Olpin at his best. The choice of artwork is eclectic and personal and the commentary conversational. Olpin always seems to prefer being anecdotal to being pedantic. When he talks about art he seems less like a University professor and more like a personal friend enthusiastically showing you his personal collection.

Though he may not have owned the works he discussed in the telecourse or wrote about in his books, they always do seem very personal to him. That’s because he made the study of Utah art his personal mission.

The first time I met Dr. Olpin was in his office on the University of Utah campus. I had come to talk with him about writing a review of the 2002 Spring Salon for 15 Bytes. The only empty, maneuverable space in his office was the arc created by the opening door; the rest of the office was taken up by his desk, himself and his stacks and stacks of boxes, folders and papers — a life’s work on American and regional Utah art. Sitting behind his desk, Olpin made me think of Thomas Aquinas, the great Catholic theologian, composing his Summa Theologica. I’m sure he had an innumerable number of items on his agenda, but he agreed to write the review. I think reviewing the Salon must have been second nature to him, a quick update on the long history of Utah art he elaborated on throughout his career.

Olpin had to blaze his own trail for that career. When he pursued his PhD at Boston University in the late sixties, American art was rarely studied seriously. He had to create his own dissertation program to fit his interests in American and Regional art. After earning his PhD, he was invited back to teach at the University of Utah, where he remained for over thirty ears and served in countless capacities including department chair and dean of the College of Fine Arts.

Olpin edited, authored and co-authored numerous books on American and Utah art, including Waldo Midgley: Birds, Animals, People, Things and A Basket of Chips: An Autobiography by James Taylor Harwood.

A chance encounter with Bill Seifrit, who came to Olpin to complain about some omissions in Olpin’s 1980 Dictionary of Utah Art, led to a lifelong friendship and collaboration. Together with Springville Museum of Art director, Verne Swanson, they authored Utah Art in 1991, and its updated revision, Utah Painting and Sculpture, in 1997. These volumes are the standard texts for the study of Utah art.

This trio of Olpin, Seifrit and Swanson formed the nucleus of the Art Nerds, an informal group of scholars, professionals and enthusiasts who met (and continue to meet) regularly to discuss Utah art.

Members of this group, includng Olpin, created a citizens group to petition state and local legislatures to devote a percentage of building costs towards the purchase of art. Most of the percentage for art programs in the state (such as the Salt Lake County program, see next column) are a result of the efforts of this group.

Olpin also served as co-director of the Utah Fine Arts Institute and president of the Associated Art Historians, Inc., a Utah nonprofit corporation.

Olpin was always eager to start new projects. When Tom Rugh, former director of the Museum of Utah Art and History, told Olpin about his idea to publish a book on painters of the Wasatch Front, Olpin’s reply was “That’s something I’ve always wanted to do,” and he immediately became part of the project. Painters of the Wasatch Mountains, which contains almost 300 color prints and is co-authored by Olpin, Rugh and Ann Worten, is now available in local bookstores.

Olpin was been influential in creating the fine art collection at the Marriott Library and he was the impetus to the Library’s recent endeavor, the Utah Artists Project. The UAP is designed to digitally archive and make publicly available all materials relating to the study of the visual arts in Utah. It is in regards to this project that I met Olpin a second time. Ever eager to reach into new realms and take on new projects, Bob was kind enough to stay after a recent UAP board meeting to make sure he and I could get together for lunch, to discuss how we could get his students to write about Utah art for 15 Bytes.

In this very specific respect, Olpin’s untimely death at 65, has diminished Artists of Utah. This loss is echoed in every visual arts organization in the state. His enthusiasm, his example and his wealth of knowledge have helped to funnel energy into projects and programs across the state. His teaching has trained many of the professionals working in the visual arts today.

I won’t pretend to know the loss he will be to his friends and family, but to our visual arts community his passing creates an irreplaceable void. I doubt any one person will be able to fill his shoes or follow all the trails he blazed.

On Saturday, December 10th, from 11 am to 3 pm, the Museum of Utah Art and History invites members of the community to pay tribute to Dr. Olpin by having their reminiscences of the beloved professor be captured by YourStory: Record and Remember, a MUAH recording studio devoted to the preservation of Utahns’ life stories. The recordings will be presented to Olpin’s family and a copy will be placed in the oral-history archives of the Marriott Library at the University of Utah. The Museum is located at 125 S. Main in downtown Salt Lake City.