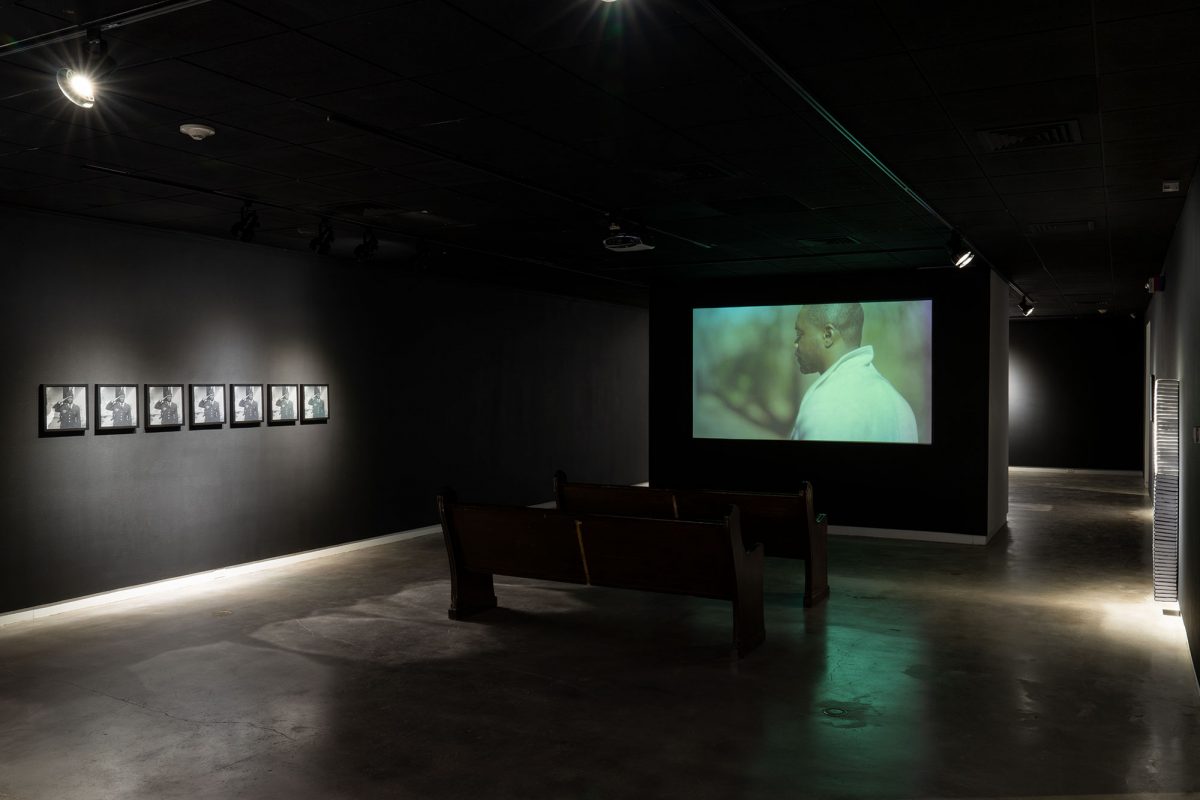 In Black River, Charles Edward Williams tells a personal story of universal relevance through eloquent physical metaphors. He could have written it down in one of those dubious memoirs that became all the rage a few years ago: how the author fell into addiction or abuse, hurt loved ones, and then found a way back onto the righteous path. He chose instead to gather things that evoked responses in him, things he found that resonated, perhaps painfully, with his memories, and to arrange them in plangent, eloquent, and chronological ways, then install them at the Utah Museum of Contemporary Art, where they may resonate with viewers as well. Although many in his Utah audience may struggle to understand the shifting value of religion in his life, or his struggle with his father’s efforts to raise him as the older man felt necessary, there are parallels to be found all the same.

The story Williams wants to tell begins steeped in irony, which as usual is invisible to the casual viewer. The first ensemble consists of seven paintings collectively titled “The Unforgiving Son.” Oddly, given the title, they depict an admirable, even an ideal youth: he studies, enjoys nature, graduates school, serves in the military. Yet appearances, as is often said, are deceiving. These images are competently painted on pages torn from a Bible, suggesting a discontent, even an anger shown retrospectively that may have been hidden at the time. Williams says in a statement that when he was young, his father, knowing that he would need to learn how to get by in a white man’s world, subjected him to the harsh standards typical of military life: a discipline that eventually shaded into abuse. Then, when Charles was 15, his father experienced a religious awakening and became a minister. Suddenly, charity replaced rigor, and everything the son had internalized was turned upside down. “The Unforgiving Son” encapsulates the overall shape of this story, with the resulting emotional and psychological conflicts included, in a compact way only art can manage. The rest of Black River goes on to similarly display Williams’ continuing efforts to reconcile himself to this inversion of everything he spend his crucial, formative years internalizing. 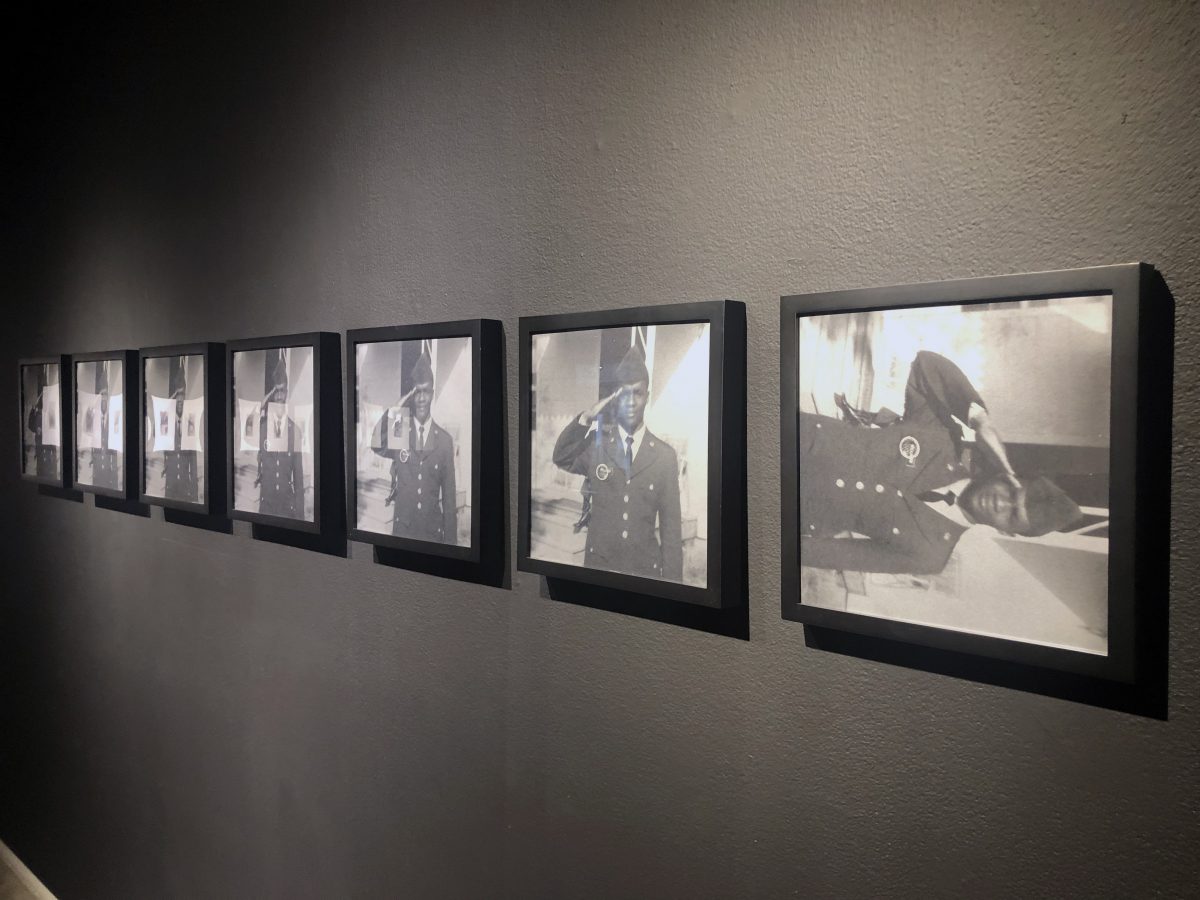 In “Formation (Yes Sir),” seven framed, vintage black-and-white photos hang in a row. The first one shows a young Black man immaculately turned out in military uniform, saluting obediently. The second displays . . . the exact same photo, as does the third and so on as the viewer proceeds along the wall, until at the end, the last photo has taken a tumble. This could be life and death, even including the horizontal finale that traditionally comes to us all. The number seven, though, suggests the days of a week, so it might thus serve to call attention to the Sabbath, the day set aside for God, and so emphasize that religion, rather than bringing peace and a sense of well-being to Williams, turned his life upside down. These several elements, including self-improvement, self-control, the military, and the church will recur in various combinations throughout Black River, and by the end the significance of them all, not only in the artist’s past but in his present and future, will be unmistakeable.

Williams’ art gains much of its power from his inclusion, in almost every work, of what are conventionally called found materials, sometimes originals such as photos from his life, at other times examples created by him while drawing on either his childhood lessons or his developed skills. An example of something he learned to do, and cannot forget how, is found in one of the most emotionally plangent works, “Tough Love,” which consists of a switch, such as a parent might send a child out to cut himself for his own chastisement, a tree stump with roots still attached, and a pile of chopped wood. While all three are relics of physical chastisement, the central stump with roots also serves as a sermon in physical form: something metaphorical about the disparate forms roots can take. In “Black River # 3 (Baptism),” hand-written drafts of what may have been his father’s sermons have been symbolically dipped in river water. Nearby, a proverbial stack of identical Bibles as tall as a man has been arranged with black copies on the floor and white copies sitting atop them, in the “Measure of a Man.” 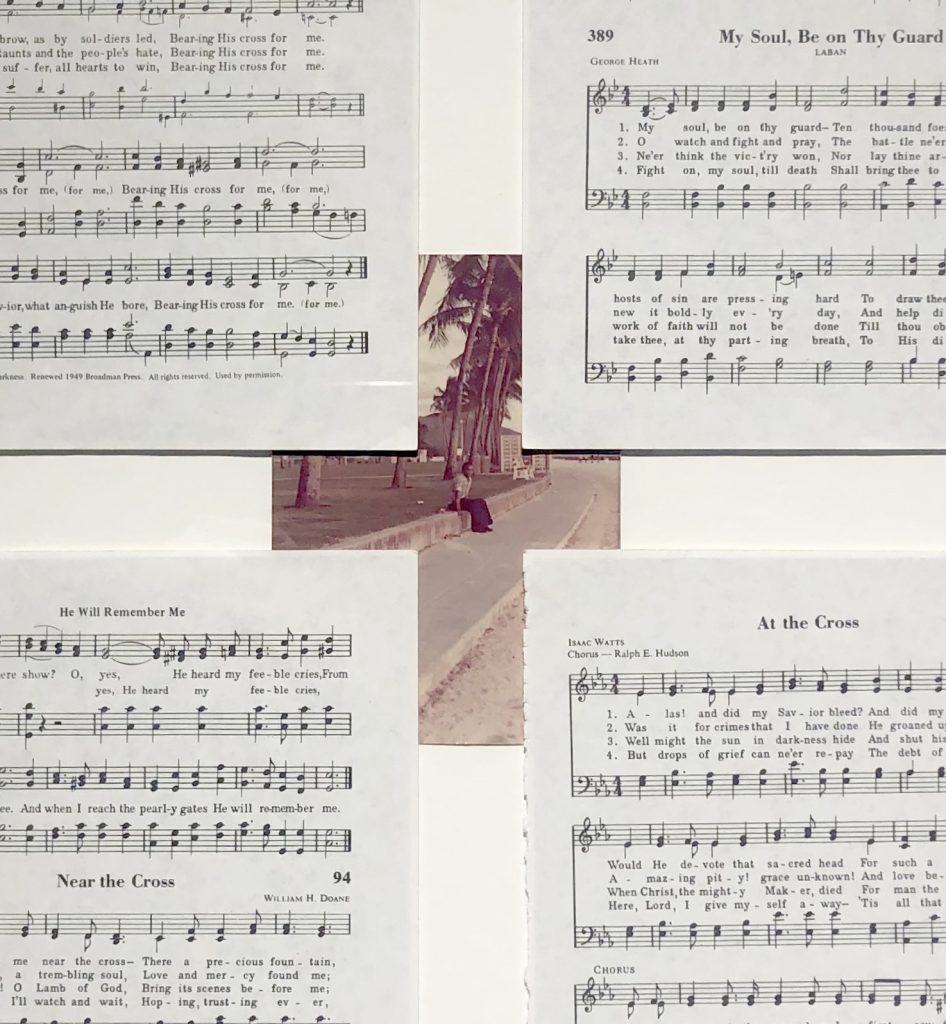 Detail from “Keep Me Near the Cross,” photo by Geoff Wichert

The complete installation of Black River includes eight separate works, each of which, no matter how innocuous it may seem at first, looks directly into one of the most influential relationships in the artist’s life and reveals something intimate and potentially embarrassing for him. They don’t just enumerate conflicts between father and son: they excavate lasting, reciprocal injuries done to each other, such as cannot be healed, but must instead be lived with. In “Measure of a Man,” instead of the father standing his son in a doorway to mark his growth with a pencil, we are shown how the boy was effectively measured against what, if we think about it, are the self-contradictory, yet unyielding, and ultimately intimidating standards of scripture. “Keep Me Near the Cross,” four pages of hymnal sheet music are arranged in a convention fashion, two pages in each direction, so they enclose and overlap a photo of the vulnerable, teenaged artist-to-be, sitting on a street-side curb in Hawaii. The invocation of paradise is cancelled, though, by the way the four sheets of music turn the photo into that titular cross, at the center of which the boy is surrounded and menaced by the intruding corners of the hymns. The line from the old funeral service comes to mind: “Even in the midst of life we are in death,” though here the threat is presented as a necessary part of continuing life.

Traditionally, good art holds open ambiguous possibilities. Autobiographies must always compromise on the realization that whatever the authors suffered nevertheless contributed to their becoming who they are, and so remains a part of them. That thought might be behind Williams’ central — literally, in the middle of the gallery — metaphor. A short video is projected on a wall in front of several church pews, as if in acknowledgment of the fundamental verity to be found in gathering together and standing up before ones peers to bear testimony. That, at least, is one place where the heartfelt and vivid artistic statements that appear throughout Black River and tell the artist’s story will be immediately accessible to everyone.