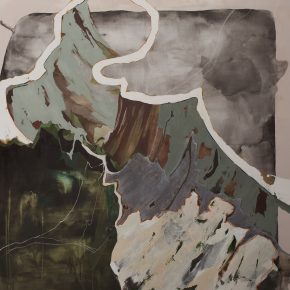 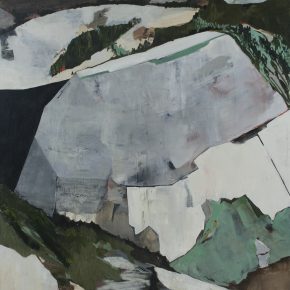 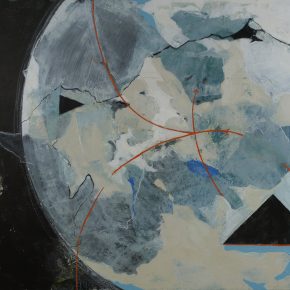 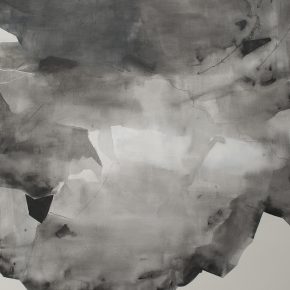 When Jena Schmidt saw ‘Black North’ written inside the lid of her grandfather’s brass compass, the words resonated with her painterly project as though she’d found a fellow explorer. While compass directions have rich associations for us, they don’t really have colors: north is no more black than it is white or green. But on a compass, north is red, a convention so well honored and established that a compass with black north might prove difficult to use: where it’s meant to orient its user to her position in earth’s magnetic field, thus enabling her to find her location in nature and the world at large, in the absence of those symbols from another dimension, that of language, overlaid on the pirouetting gnomon that is the compass’s needle, it might be no help at all. And so it found its way into her paintings, which are equal parts lush, almost startling landscapes of the eye and, at the same time, places in the mind. Like all good representations, they both show and tell, all the while operating on more levels than those two.

Schmidt says, ”I am seeking for a place that may only exist in spirit or imagination through my own experience in nature and on the canvas.“ Here she balances outer and inner experiences, identifying nature and art as equally important means in her search for what she goes on to call ”a place I know doesn’t exist,“ that must be something she will discover for herself. An artist who means to represent the visible world in some form must reverse-engineer the power of sight. When she looks at the world, the two-dimensional image on her retina is expanded by her mind into three-dimensional information, a convincing illusion that pops up pleasurably in her visual cortex. Virtually anyone who sees can do that, but the artist’s rarer skill lets her arrange marks in two dimensions that resemble what’s on her retina closely enough that another viewer’s eye and mind can have the same delightful experience. Then those fully rounded spaces appear in a second mind. Schmidt doesn’t stop there, however, because she subscribes to another symbolic language: one that graphically represents states of mind and body arising from the contemplation not only of what one sees, but also what one knows. While a major impulse in art, this abstraction of the world is rarely more than glimpsed in nature. So Jena Schmidt’s paintings don’t just relay and idealize what she sees while exploring among mountains, fire, water, and sky. They also narrate the exploration that takes place on her sketch pad, in her studio, and on the wall where that adventure continues in the minds of those who engage with them.

As Finch Lane curator Kandace Steadman points out, both the sensuous and cerebral pleasures to be found in these works come in large part from their visible layering. Here the paint takes a lesson from nature, where the mountain falls between us and the sky, the trees between us and the mountain. Traditional painters minimized such facts, taking pride of craft in bringing everything on the canvas to a unified surface. Here in Black North, even when all we can be certain of is paint, the term ”mixed media” accurately describes the visual texture. In “Northern Pull,” collage-like rectangular areas mimic the irregular way clouds assemble themselves in space, while penciled boundaries and arrows lend tension and bring the verb in the punning title to life. Another title with a verb, “Clouds Rest,” features clouds made of areas of paint that literally rest on the tree-clad slopes they all but cover. Or are they patches of snow? Water as vapor or water as ice? Here the ambiguity feels like an exercise of control. The massive wedge of snow-clad rock that juts up to fill the picture’s center fulfills the other reading of the title, a mountain bearing a popular, descriptive name.

Gestalt psychologists focused on ambivalent visual phenomena such as figure-ground dilemmas and optical illusions wherein the mind, unable to choose between two options, flips back and forth between them rather than averaging them into one view. The mind insists on maintaining one or the other of two sensible options. The autobiographically titled “I’m Not Lost, I Just Don’t Know Where I’m Going Yet “employs this sort of vacillating vision to strong effect. In one reading, the diagrammatic qualities of orange arrows, buried fragments of textured materials, and an overall graphic sketchiness flatten the surface. Consequently, when the far more subtle, but pervasive optical clues that this is a sphere become dominant, the planet that comes into view is far more palpable than it would be if it were the sole meaningful reading. Imagine two interpreters in the mind, each arguing for one or the other version, each pressing the case more strongly in the face of uncertainty. Vertigo accompanies success in finding the representational qualities of geological terrain in “Believe and See” or “Around the Fire.” A viewer who feels disappointed that these depictions aren’t more visually literal should find compensation in their mythical power. It’s a rare photograph, or photographic painting, that has the power to impress itself on the kinesthetic senses the way these panels do.

Mythology, of course, plays a vital role in landscape. Over millennia, surprisingly few representations were made of the land as anything more than a schematized scene of action, like hunting or battle. The slow accretion of significant associations kept landscape from emerging as a pure genre until well after the Renaissance. A few years ago, when UMFA hung several dozen paintings of Mount Olympus, it’s unlikely that anyone came to find out what Salt Lake’s most iconic massif looks like: they could have seen better for themselves on the way in from the parking lot. Rather, the gallery became a place to see what many of Utah’s leading painters saw symbolized and mythologized by the mountains beneath which we spend our days. Schmidt has mythic concepts to match her mountains; she speaks of wilderness, a place of the spirit, a mystery to explore like life itself. Not everyone will appreciate her equivalence between nature as a fact, a myth, a metaphor, and a subject for art. After all, today’s photography-fed audience tends to equate the work with its subject matter, as though the world were all a Hollywood movie, or at least a YouTube video. Those who have followed the rich tradition of Utah landscape painting, on the other hand, may rejoice to know that a new voice has joined those who went before. Jena Schmidt takes her inheritance seriously, and in Black North makes something new from it.