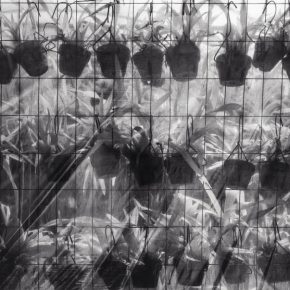 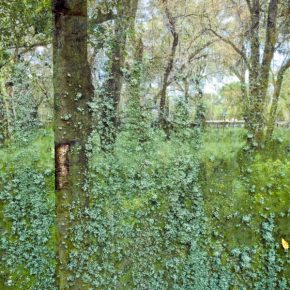 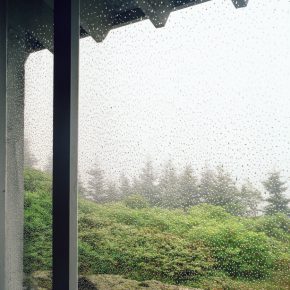 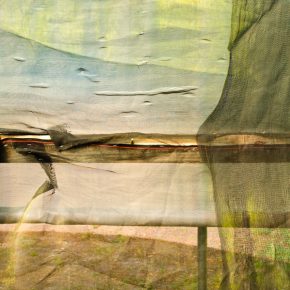 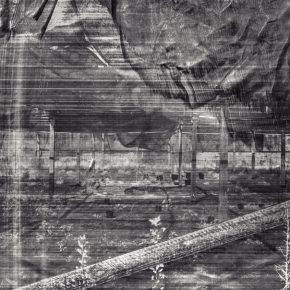 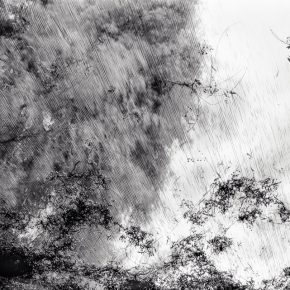 “I love ambiguity,” Bernard Meyers says, and with that refreshingly unambiguous confession, highlights a principal characteristic of his photography. Ambiguity is what makes his photos—unlike the majority of images produced by today’s ever-more ubiquitous cameras—valid additions to our common visual language. Or in other words, works of art contemporary with the time of their making. Otherwise, in conventional photography, like painting in its heyday, before the advent of the mechanical image, the viewer willfully bypasses the process and the image it produces, presuming to see as if directly, without mediation by the techniques of reproduction. “Point-and-click,” the advertising promises, and it might as well add, “see-and-know.” The mind behind the camera usually searches for the most easily deciphered image: an effort that the camera, with its analogous structure to the human eye, readily abets. Faces, figures, social events, products, and street scenes can respond to the impulse to make art, but first they are visual impressions, not unlike memories that can be shared, and few photographers ask any more of them than that.

But instead of scenes that appear in our minds as if immediately present, the sensuous textures, rhythmic patterns, and copious details in Bernard Meyers’ prints, while they let us feel their visual music, challenge our minds to penetrate the represented spaces and suss out the arrangement of the parts. Along the way, we discover new meanings and significance in what we see. As with life itself, the more information revealed in Meyers’ photos, the less unified and simple the world appears, and the more aware we become of the limits of mere perception to take us behind the veil of material reality.

At the dawn of the 19th century, romantic poets and painters found nature sublime: vast, alien, and threatening to puny humanity. In the early 20th century, romantic photographers like Edward Weston and Ansel Adams sought to reboot human nature through images of wilderness. As the 21st century looms, Meyers, who draws more on Minor White’s post-impressionist feeling for structure, finds his subjects in greenhouses and hydroponic gardens. Here, in the uneasy boundary zone between vegetal vitality and human ingenuity, where natural impulses and engineering vie with each other for primacy, he finds fresh insights into the totality of creation.

In one of his most effective tropes, seen in “The Rent Veil,” “Both Sides Now,” and “Forbidden Fruits,” the landscape format divides horizontally into vertical stripes. Ramshackle details, like an opaque door on the left and a transparent one on the right, present surface and form, both close to the work’s actual surface. In the center, the interior beyond the passageway plunges deep into a space where patterns of rectangles and straight lines attempt to domesticate nature: a readily perceived and self-confident space that is present here only in the viewer’s mind. In “Victorian Amazonia,” giant round lily pads spread organically over rectangular mullions that are actually reflected in the water that supports them. Knowing that it was precisely these exotic plants, imported to England in the mid-19th century, that gave rise to the combination of steel and glass that has dominated architecture and urban skylines ever since only adds to the pleasure of seeing the elements interact here.

Meyers is a photographer of enormous experience, and an encyclopedia of techniques feed into these images. The needs of architectural clients have taught him to make large, sharp, impeccably printed photos. Shot using infrared-sensitive film, plants appear white: sometimes in sharp detail and at others like luminous clouds. The resulting contrast with the pure black that only printing with ink on paper can produce exceeds the range of what traditional silver prints can achieve. The control available through digital processes contributes to the layering with which Meyers builds his compositions-in-depth: the eye is able to discern and penetrate multiple veils of translucent and semi-opaque material: gauze, burlap, screen, corrugated plastic, and glass painted to control light, each rendered in sharp detail and proportionate luminance. Skill plays an indispensable part here, of course, but it’s clear that the hapless amateur is not alone in profiting from the advent of computers throughout the light-fixing process; visionaries of every level of accomplishment will benefit from greater freedom to shoot and more control of the printed result.

Metaphors suffuse Between Worlds. Some, like the spurious distinction between natural and human, loom large. Others, more local and intense, occur when two identities approach each other and even seem to cross over. The apparently abandoned hydroponic facility that figures in “Above and Beyond,” “Hydroponic Score,” “Line Study” and elsewhere challenges the idea of a difference between the neat order of human farming and the seeming fertile chaos of the jungle. In fact, here the distinction between nature and human order all but dissolves. Even if the larger chaos can be blamed on immediate circumstances, the detail shots of spidery distribution networks make the industrial seem, if anything, more free-form than the neat alternation of branches seen in the plants. Like those venturing to clone or genetically modify naturally occurring organisms, the engineers reveal themselves to be beginners at doing what DNA—even their own, in their species biology—makes look like child’s play. Meanwhile, the plants, in their neat geometric rows, perform a simplified, schematic version of what they would do far more abundantly, if chaotically, on their own.

Meyers is also an academic: a popular teacher whose students at the Waterford School in Sandy enthusiastically filled the gallery on opening night. And his knowledge, not only of the history of photography, but of art as well, pervades his own efforts. For “Starry Day,” he noticed countless pinpricks, dots of white light scattered across a roiling sky of muslin sunscreen, needing only his title to recall Van Gogh. The colored veils of “Rothko Reverie,” here dividing a portrait format into vertical thirds, not only suggest the hugely popular American painter, but support the interpretation that his stacked areas of color represent not just the spiritual or emotional states they evoke, but the vividly felt landscapes that may inspire them. And in “Homage to Sudek” he connects with Josef Sudek, the influential Czech artist whose breathtaking photographs of mundane windows are among the most moving masterpieces of 20th-century art.

The generation that remembers when photography was synonymous with black-and-white is still around: is, in fact, the same one that survived the Depression and fought World War II. But as we’re often reminded, they are passing away, and soon the expectation that photographs come in color—not to mention 3-D and motion, with sound—will be universal. Bernard Meyers extends the tradition of art photography in shades of gray alone, and in his defense might well point to Occam’s Razor: the principle that nothing should be added unless it substantially improves the result. Indeed, these photos don’t suffer for the lack of color; in many, a case could be made that the addition of color would only weaken their visual impact. That said, several in fact are in color: the aforementioned “Rothko Reverie,” wouldn’t work without it. “Porters’ Porch” contrasts the bright green forest landscape outside with the monochromatic interior, the two divided by a wall of water droplets like floating lenses. Similar magic occurs in “Roadside Attraction,” where a vividly crumpled, black-and-white scrim separates viewers from bags of brightly colored spheres. And the show’s masterpiece, “Fern Farm” constitutes one of the most visually haunting, mentally adhesive photo images I’ve ever seen. The largest work here, it begins by suggesting a ruined photo, its surface irretrievably damaged by water or mold. On closer inspection, the intervening layer consists this time of moss growing on a screen, so optically ambiguous that in places it appears to be on the trees, while in others it extends into air. Without the subtle shades of green, this spooky (to say the least) image wouldn’t read anything like the way it does here.

The visual conundrums of Bernard C. Meyers draw us into optical encounters that challenge our eyes and minds. The resulting conversation, including, but not limited to, the photographer and his subjects, what the viewer sees and what that individual (or group, if one is fortunate enough to share the experience with friends) already knows, and memories old and new, makes this show the antidote to the all-too-common experience of skating through a gallery, untouched by what’s on view, and ultimately emerging unchanged. The first-ever solo show at Alice Gallery will send you home enriched with visual experiences to keep, and that will change the way you view the world around you.

Bernard C. Meyers’ solo exhibition Between Worlds is at the Alice Gallery in Salt Lake City through November 14. You can view more of the artist’s work at bernardmeyers.com.