Ben Gaulon wants you to Corrupt.Yourself: Some serious fun in UMOCA’s Codec Gallery 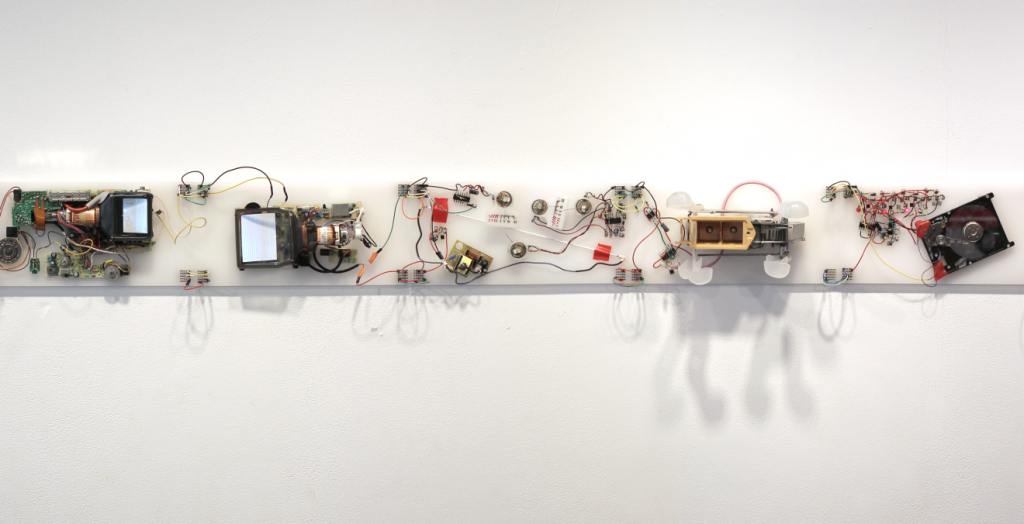 Shelley, given like all Romantic poets to overstatement, wrote that “poets are the unacknowledged legislators of the world.” Two centuries later, Auden replied that “poetry makes nothing happen.” Presuming that what they said of poetry can stand for all of art, their argument addresses the essential question of what is popularly called “contemporary art:” can, and more crucially, should art even attempt to influence the erratic course of human events. In Corrupt.Yourself, three works in which he explores the aesthetic possibilities of what is here identified as “the glitch,” French artist Ben Gaulon asks that question and offers two answers. Yes, however slight the impact, art can provide a means of recycling today’s digital technology: defunct computers, cell phones, Kindles, and so forth, can turn into objects worthy of contemplation, even if they can no longer perform the tasks for which they were built. Second, and far more promising, they point the way to a new human cerebral adventure: exploring the accidental products of misfiring information-processing circuitry.

“Refunct Modular” runs long one side wall like a classic architectural frieze, but this one made of components salvaged from unknown electronic devices. Tiny, flickering video screens; meters with hands that swing back and forth from black zone to red, across now-meaningless numbers; a humming cooling fan; a hard drive with its busy sensor jumping back and forth as it seeks some mysterious data; tiny noises from tiny speakers; and yards of colorful wiring wind their way along the wall, as hard at work in their way as the bands of hunters chasing their game, or warrior armies clashing, or garden flowers and animals that cavorted in bas-relief along past centuries’ ornamental walls. For one sitting nearby, this slightly frenetic activity is paradoxically calming, as though reassuring that all is well, that necessary tasks are getting done in the background, where presumably they belong. Along the opposite wall hangs “Kindle Glitched,” eighteen antique Kindles displaying frozen screens on which the intended images are interrupted by accidental patterns of lines and fields, each a marvel of random plaid collaging, or a perspective illusion of intervening space, or instructions for the former operator that alone survived into obsolescence. On the end wall, the title video is projected, showing the real potential of the glitch as scene after scene of conventional video is casually and haphazardly mangled into a cerebral soup that is far more entertaining, and arguably more nourishing, than the source components.

In the twentieth century, the curious and adventuresome could turn on two radios set to different stations, or turn a TV on its side, or find other ways to introduce random noise into deliberate attempts at communication. Ben Gaulon, and his collaborator Martial Geoffe-Rouland, have shown how today’s digital machines, once their original purposes have been taken over by newer, perhaps better machines, can provide more sophisticated versions of this abstracting activity—dare one say this neo-musical compositional pursuit—of breaking down our information to expose and recombine its DNA.

Ben Gaulon: Corrupt.Yourself is at the Utah Museum of Contemporary Art’s Codec Gallery through January 16, 2016.