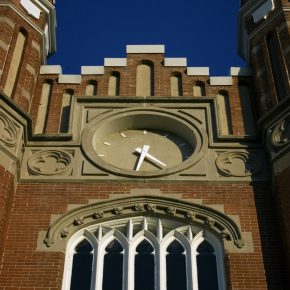 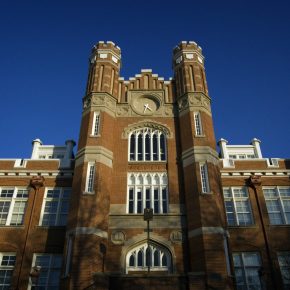 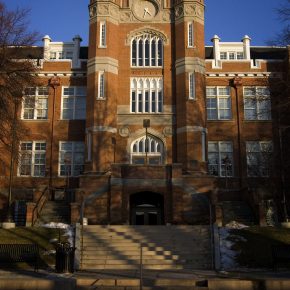 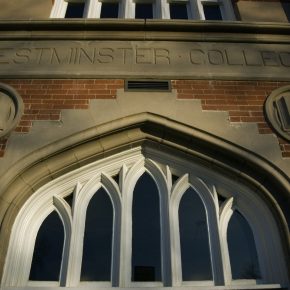 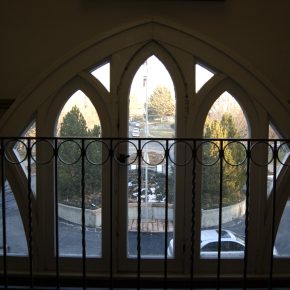 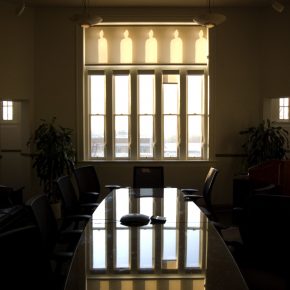 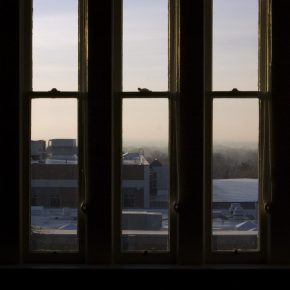 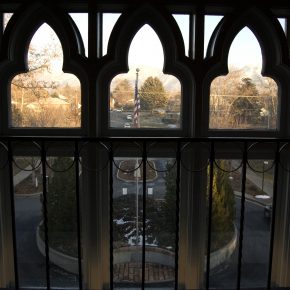 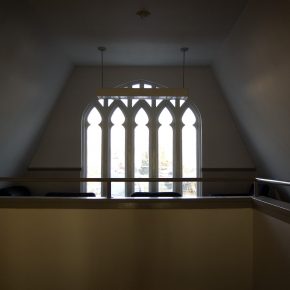 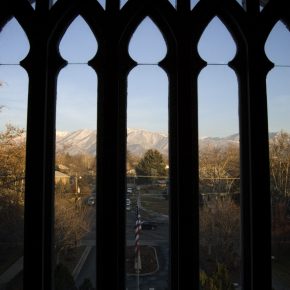 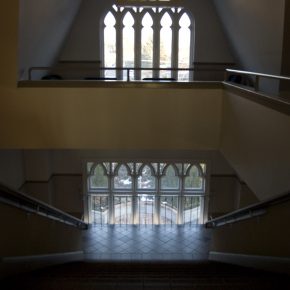 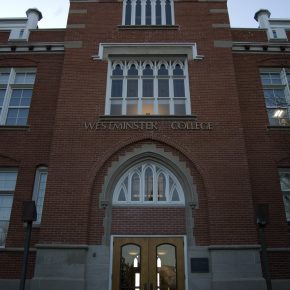 Two steps up on the east side of the third floor of Westminster College’s flagship Converse Hall is a small sitting area framed by a steep pedimented gable and the large, east-facing window. Four lounge chairs — three covered in a faded maritime-blue fabric made of knotted-thread polyester and the fourth in a dusty black Naugahyde — are arranged in a U-shape opening to the east. The building’s pedimented gables, framed in white against the burnt orange tint of the painted brick, act like notches and direction arrows pointing to the building’s belfry and its two tenants: The Westminster Bell and four loudspeakers.

When Converse Hall was first completed in 1907, and the bells began chiming, the view from this spot was of a bucolic dirt road, bordered with drainage ditches thick with willows, and surrounded by farmland and orchards. Imagining a future tree-tunnel that would shade the road between 1700 South and Emigration Creek where it crosses 1300 East, the Presbyterian pioneers of the college planted London Plane Sycamore trees on both sides of the dirt road. Today, the view from Converse Hall has changed dramatically: the drainage ditch and willows have been replaced by concrete curb and gutter, and the sycamore trees, vigorously pruned to provide passage for a large black power cable, now resemble saguaro; and 1300 East Street has become an asphaltic conveyance choked with vehicle exhaust and drowned in the rumble and roars of internal combustion engines. Above this din, however, the bells still chime, outlining the soundscape of the college’s “campanilismo.”

From the Italian word for bell, campana, campanilismo captures the special tempo and flavor of rural Italy, where towns are anchored by a bell-tower (“campanile”) and the sound of bells and chimes mark the andante tempo of walking, talking, biking and socializing. The historical literature indicates that bells sounded in medieval Europe as early as 900 CE.  Found in churches, town halls, and university campuses, they have been used to send messages, warnings, alarms, and mark sacred and secular time; and are intricately connected to religious and holiday observances.

Converse Hall’s belfry is located at the intersection of the N-S and E-W axes of the building. Not as tall as the gothic towers to the west, nor the steep pedimented gables above the roof at the east and west entrances, the wood framed belfry, painted white, sits topped with its asphalt-shingled Tin Man hat.  Inside the belfry, the campus bell is mounted on a sprocket wheel, and four speakers are mounted above the bell and just under the eaves of the belfry; each speaker pointing toward a cardinal direction, yet angled toward the ground.

Similar to a wolf marking its territory, the sound waves from the Westminster bell and belfry speakers project sound waves in all directions and where these waves encounter objects, or ground, or other sound waves, the territory of campanilismo is marked.  The sound waves bump up against the ground-based NASCAR sounds and values — fast vehicles, revving motors, screeching tires, and busting glass — while the bell of Westminster sits in sanctuary-like, symbolic counterpoise to the whirlwinds below.

With metronomic dependability, the sounds from Westminster College’s belfry act as a defense for the college against the barbarians at the East Gate.  Daily, and precisely — from 8 a.m. to 6 p.m. — the bells of Westminster announce the quarter hours with a single chime, and each newly arrived hour with an appropriate number of tolls.  And twice a day, at noon and 5 p.m., the bells ring out with an extended melody.

The bell tones of Westminster College are re-creations from chimes and bells of Big Ben,  the clock tower at the north end of London’s Westminster Palace. These chimes and bell tolls are among the most famous sounds in the world. Also called Westminster Chimes, Westminster Quarters, or Cambridge Chimes, they are sounded to start and end classes as far away as Japan. Some musical theorists believe the Westminster Chimes to be a set of variations on the four notes that make up the fifth and sixth measures of “I Know that my Redeemer Liveth” from Handel’s Messiah. The melody consists of four different permutations of four pitches in the key of E major: B, E, F? and G?.

(Aside: Not many classical music arrangements are in the key of E major, though Bruckner composed his 7th Symphony in that key. Christian Schubart’s “Ideen und einer Aesthetik der Tonkunst,” (1806), suggests the key of E Major is characterized by  “…noisy shouts of joy, laughing pleasure and not yet complete, full delight.” However, Mick Jagger must have gotten only half of the memo, as The Rolling Stones’ “I Can’t Get No (Satisfaction)” is written in E major.)

But neither the music nor the Westminster Chimes come from actual bells. The bell of the belfry of Westminster College is idle; except on rare and special occasions such as Convocation when it is manually turned. Daily, the mission critical work of bell ringing is done by the college’s most steadfast, productive, and cost-efficient employee: The Wheatlake Schulmerich Virtual Carillon. This virtual carillon plays music from a disk of pre-recorded bell music and the sounds are amplified through the four speakers in the Converse Hall belfry.

This virtual carillon re-creates the sounds of traditional carillons, which are among the heaviest of musical instruments, consisting of 23 cast bronze, cup-shaped bells, mounted on an acoustically neutral, multilevel, four-sided metal frame with bells hung in the interior of the structure, and with different size bells at each level. The bells are played serially to produce a melody, or sounded together to play a chord.

As the costs, including expensive retrofitting of Converse Hall to structurally support an actual carillon, are prohibitive, a virtual carillon made by the Schulmerich Carillon Company, was donated to Westminster by the Wheatlake family, whose donation was in the name of their father, Dr. B.C.J. Wheatlake, a Westminster alumnus. The Schulmerich virtual carillon is a small disk player and amplifier. A digital disk is inserted into the console; the music controller is set to “shuffle,” and random bell music — ranging from classical, traditional, show tunes and popular songs — is amplified to encompass the college’s block-wide campus and beyond. At 5 p.m., those trapped in traffic beneath the amputated sycamores, can hear the peaceful refrains of Westminster’s virtual carillon, if they but turn down the other kind of “heavy metal music” from their vehicle’s sound system.

In Victor Hugo’s The Hunchback of Notre Dame, the intelligent and good Quasimodo saved the beautiful but shallow Esmeralda and carried her to the vertical heights of the Cathedral of Notre Dame from which he cried “Sanctuary! Sanctuary!” invoking the privilege of protection found inside medieval churches. Today, Westminster College’s campanilismo is a virtual sanctuary defined by its vertical and auditory virtues, the belfry and the bells.

This article appeared in the February 2015 edition of 15 Bytes.