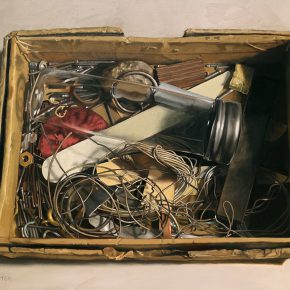 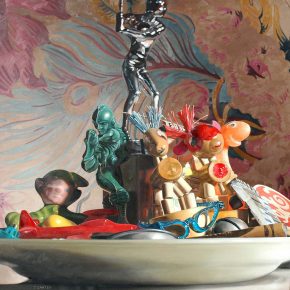 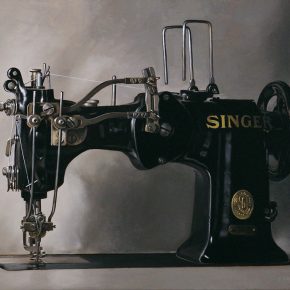 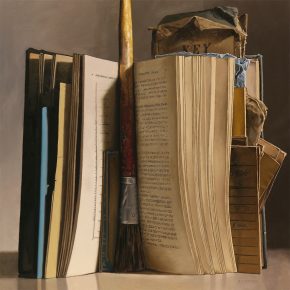 According to Wikipedia: The hippocampus (named after its resemblance to the seahorse, from the Greek hippos meaning “horse” and kampos meaning “sea monster”) is a major component of the brains of humans and other vertebrates. It belongs to the limbic system and plays important roles in the consolidation of information from short-term memory to long-term memory and spatial navigation.

Every tinkerer or handyman has one: a jar or box to save things for which no designated jar or box exists. Joe Carter has painted one in his familiar, precise manner. He calls it “Hippocampus,” and the title is as accurate as his painting of bits of wire, odd hardware, narrow glass jar, and even the taped-up sides of the box itself. Carter’s box fulfills much the same function as the hippocampus, holding odd bits for evaluation, a step on the way to permanent storage. But Carter’s analogy goes much further than that. Isn’t art the equivalent in its context of the hippocampus in the brain? Whether artists make close copies of the things they see, or the feelings they evoke, or just the signs of the times, the fundamental job of art is conservation. The sewing machine in “Family Threads” celebrates the industrial age, when machines were not just efficient, but elegant as well. And the futuristic cityscape? “Transistorville” reveals something unintended that was always there, a metaphor hidden inside that clock radio. The architect said form follows function, but the hippocampus makes other connections.

Another oil, titled “Odds and Ends,” further demonstrates the mind at work—and why no computer comes close. Canny viewers will know that this assortment of tchotchkes were chosen by Carter to make an interesting painting. But stand for a few minutes in contemplation, and possible links will soon come to mind. These over here are all figures, of which those two both look like spacemen. And that jet plane . . . doesn’t that go with Buck Rogers? Give us the images and we will make up the story. But then what of “Key”? Here my mind wants to resist the simple conclusion that he assembled this subject just to paint it. If a box can be a hippocampus, what about a book? Especially one with so many addenda saved among its bound pages.

“James Gang” captures a fundamental truth about images: each generates its own context. Toss one—the TWA promotional card—on top of another—the band’s poster—and their disparate perspectives clash. They refuse to lie down together, until the brain imposes an even larger context on both. Carter’s art straddles the wall between a viewer’s awareness of the painting and his or her interest in the subject matter. If he fails, as artists today far too often do, either the painting becomes all about the painter, or its audience looks right past the artist’s fingerprints to see the subject as though it were physically present. In the end, each Carter oscillates between the arrangement of two-dimensional information on a flat surface and an incandescent encounter with something real.