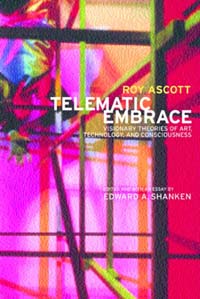 Behaviourables and Futuribles
A review of Telematic Embrace: Visionary Theories of Art, Technology, and Consciousness

In 1970, Roy Ascott wrote, “If writing about art has any value at all at a time when art works and processes are themselves polemical, it can only be to discuss alternative futures.” Ascott has always had his eye on the future with an interest in big ideas and bigger possibilities. As both an artist and especially as an educator, his influence has extended beyond his personal reputation.
Telematic Embrace: Visionary Theories of Art, Technology and Consciousness is a highly academic collection of essays by Roy Ascott. His writing seems to always have been at the forefront of ideas in art whether in cybernetics, post-modern thought, or the twinned technologies of computers and telecommunications. Ascott isn’t interested in using computers merely to make images; his interests lie in processes of interactivity and global communications and how they can be used to make a new kind of art.

In this collection of writing extending from the early sixties through the year two thousand, Ascott explores the edges of not what is possible, but what might be possible. His early writings explore the theme of cybernetics. Long before the word cyber became a catch-phrase of digital technology, it was used to describe interactive systems that created order and purpose through feedback loops. He finds this analogous to the interactive process that artists have always sought (even if they were unaware of it), and is a key concept in his personal art.

With terms like techno-qualia, cyberception, and post-biological, Ascott loves coining new words to express new possibilities; a hallmark of its time. His writings from the 90s are a reminder of the techno-utopianism that preceded the dot-com crash. They reflect a time when the (then) new and growing technologies seemed to hold the promise of all things being possible – a chance to reinvent the world with digital and communication tools that could reshape not just the world, but human consciousness itself. Instead, we found ourselves in a world of everyday commerce filled with the likes of ebay and amazon.com.

Ascott’s writing is ultimately not about technology, but the mind. He writes in his essay Weaving the Shamanic Web (1998): “It is my contention that not only has the moment arrived in Western art for the artist to recognize the primacy of consciousness as both the context and content of art, …but that the very provenance of art in the twentieth century leads, through its psychic, spiritual, and conceptual aspirations, towards this technoetic condition.” He explores the similarities and differences between virtual reality and drug-trance experiences of shamans – from first hand experience. For Ascott, art should transcend the simple idea of object and viewer. As in shamanic rituals, there is no audience, only participants.

This is a book about ideas, and as such, can be a pretty heady exploration. Ascott isn’t only looking at his own historical moment, but toward a future (possibly hundreds of years hence) – filled with art big enough to fill the world and small enough to touch the soul. It is up to the reader to decide whether these are historical documents that reflect the ideas and hopes of the recent past or a road map for a future that artists will create, challenging what we now consider to be art.
Telematic Embrace: Visionary Theories of Art, Technology, and Consciousness