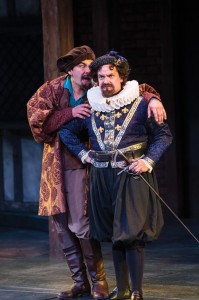 “For us, fifty-one is bigger than fifty,” said Brian Vaughan last night as he and co-Artistic Director David Ivers raised the curtain on the 51st annual Utah Shakespeare Festival in Cedar City. Featuring six plays (for the summer, with an additional two to follow in the fall), the 2012 season reveals an organization full of zeal and ambition, looking more to future milestones than passed ones (as momentous as last year’s golden jubilee might have been).  The Festival’s long-range focus is clearly set on 2024, when they will complete their goal, begun this year, to stage all of Shakespeare’s thirty-eight plays.

To cut the ribbon on their Complete the Canon program, the Festival opened Thursday night with The Merry Wives of Windsor, Shakespeare’s bawdy comedy that resurrects the character of Sir John Falstaff (presumably at the request of Queen Elizabeth) in a middle class farce: lusty Falstaff tries his best to cuckold his neighbors and drain their purses, only to be outwitted by the merry wives of the play’s title and end up the (dear) butt of their jokes. Peter Amster directs the comedy at full tilt, encouraging his large and talented cast to play up every double entendre and slapstick moment, showing that, among other things, Shakespeare is father to the modern-day sitcom and PG-13 comedy. The Elizabethan turn of phrase might do enough to protect more sensitive ears, but Merry Wives is full of off-color humor, including more than a couple of puns on the word erection — though to be accurate, one of that tally was the result of John G. Preston  (as Ford) repeating a joke while he searched for his line — an opening night stumble the audience easily forgive the actor who, despite a marvelous ensemble cast that includes Roderick Peeples as the wanton Falstaff and Matt Zambrano as the foppish Caius, managed to steal the show.  Merry Wives, with little poetry and a Falstaff turned into an opportunistic, bumbling oaf, has not always pleased critics, but the Utah Shakespeare Festival’s staging of the ribald romp had last night’s audience providing an enthusiastic laugh track.

Thursday also saw the Festival’s premiere of Christoper Sergel’s adaptation of To Kill a Mockinbird. The novel, which Ivers calls his favorite, had its own golden jubilee in 2010, which could make the timing of this year’s play seem tardy. But to watch this story — full of the ache of poverty, the blindness of bigotry and the pain of mental illness — the same week the Supreme Court decided important cases on immigration enforcement and the health care mandate, gave the performance more poignancy than any chronological symmetry could have. The play’s melancholy tension, enveloped here by Jo Winiarski’s lovely set, is given eloquent life, with the performances of Martin Kildare (as Atticus) and Monica Bell (as Jean Louise Finch) matched in stature by their younger colleagues, Nick Denhalter (Jem), Jinger Axelson (Scout) and Bailey Duncan (Dill). 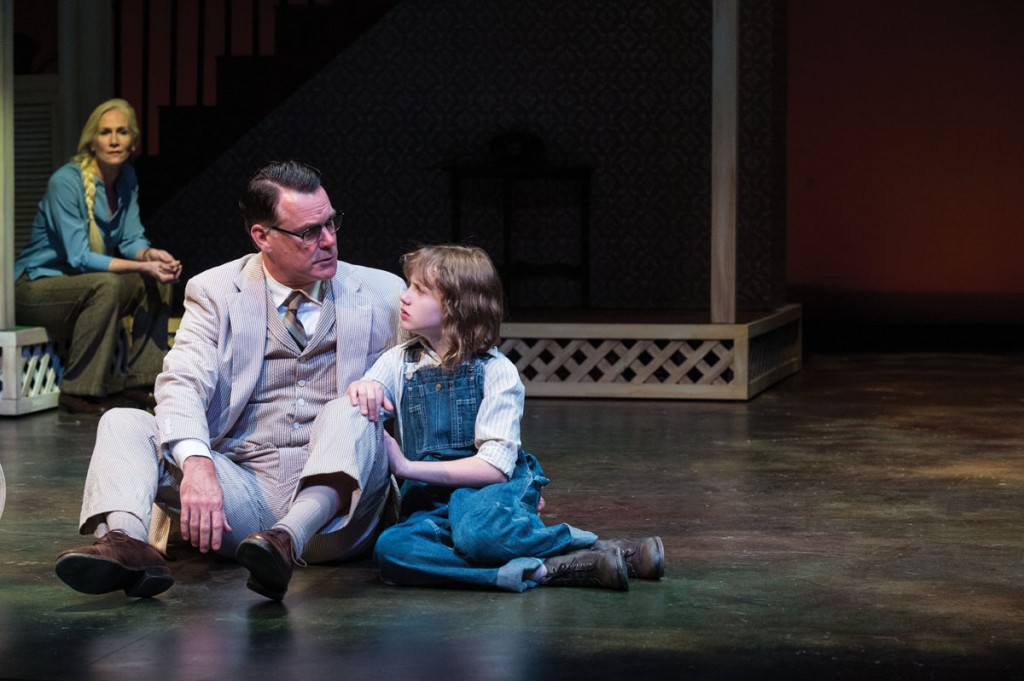