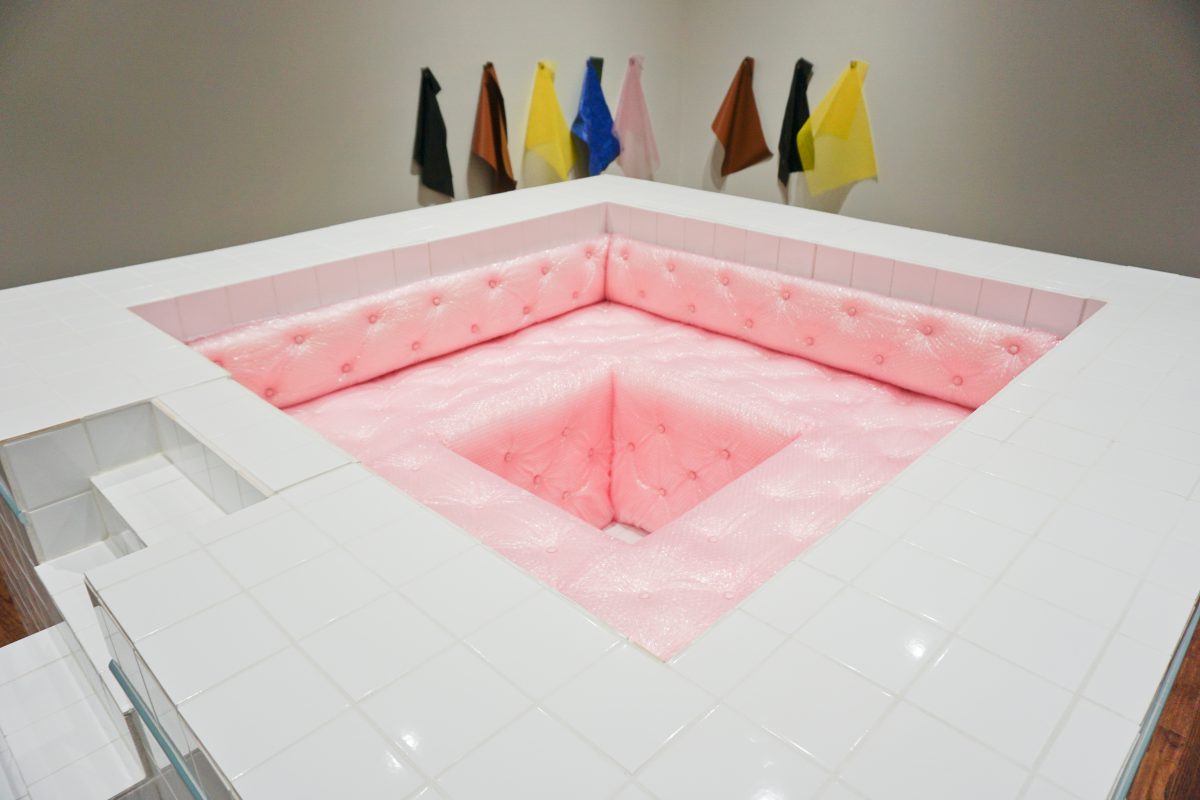 A teacup rests on a saucer, an accompanying spoon at its side. Covered in coarse fur, the seemingly innocuous objects’ deviation from the familiar is jarring and uncomfortable. Swiss artist Méret Oppenheim’s iconic “Luncheon in Fur,” from 1936, is the ultimate Surrealist sculpture, a work that invariably elicits strong responses from those who see it. Many artists find something deliciously unnerving about the act of re-purposing the familiar into the grotesque. At once a staple of domestic life, Oppenheim’s fur-laden object evoked a range of psycho-sexual interpretations in an era when Freud’s teachings were informing a new generation of artists. For Salt Lake City artist Maddison Donnelly, this decidedly psychological act was one worth replicating: it incited further exploration of how the materiality of sculpture can inform — and untimely undermine — our expectations of what the medium ought to be.

Just as Oppenheim’s work interrupts the situational gestalt by casting ordinary objects in drastically new contexts, Donnelly’s interest in domestic spaces exposes our preconceived notions of the safe and the intimate. The culmination of her artist-in-residency at the Utah Museum of Contemporary Art (UMOCA), Bath House is a testament to the psychic power of sculpture.

Early in her education at the University of Utah, where she graduated with a BFA in sculpture intermedia with a minor in arts technology in 2018, Maddison developed a fascination with sculpture, which coincided with her long-held love of design. Like many contemporary artists, she became enamored with the possibilities of the medium, and, specifically, with the range of unconventional materials at her disposal. After seeing Oppenheim’s work, she became inspired by the idea that sculpture should seek to challenge our assumptions, make us uncomfortable, and ultimately push all sorts of psychological boundaries. She began toying with the idea that familiar items, such as those found in the domestic space, could be given a new life with new materials such as plastic and resin. For the artist, the act of transformation was empowering, and informative.

The power of material to convert the familiar into the uncanny is a common Modernist exercise, employed by the likes of Marcel Duchamp, Claes Oldenburg, and Louise Bourgeois. In a powerful way, however, remnants of the object’s former ‘self’ often remain, forcing us to re-examine the decidedly personal connotations we imbue in the inanimate. It is this interactive and inward-focusing quality that Donnelly hopes to evoke in her work. 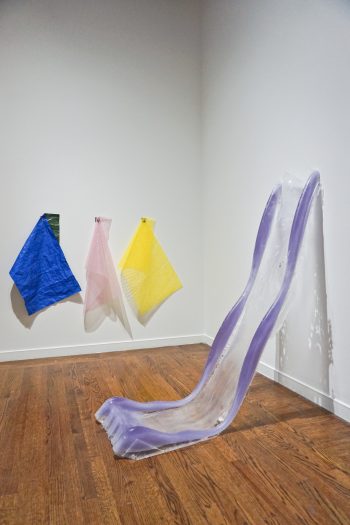 Detail of “Bath House,” installed at the Utah Museum of Contemporary Art

In Bath House, a large, rectangular structure dominating the center of the gallery space is flanked by plastic “towels” around its perimeter. Just as Claes Oldenberg’s “Soft Toilet” disarms the stability and normality of a daily object, Donnelly’s towels, made of stark, rough plastic, similarly reject the sentimental and the mundane.

Adorned with white tile, the central structure more closely resembles a hot tub than a domestic bathtub. While the cubed tile of the structure evokes a domestic sort of familiarity, its overall shape is distinct. Interestingly, it’s Donnelly’s fascination with design, namely “conversation pits,’ that informed her artistic configuration of the structure. Conversation pits, a design feature in which a rectangular structure is configured within the floor to allow for socializing, soared in popularity within domestic spaces of the 1950s and ’60s. Lamenting the decline of the pits’ popularity, Donnelly incorporates their design into another receptacle for dialogue: the hot tub. Both spaces seemingly facilitate conversation and intimacy.

Lining the inside of the tub is pink bubble wrap, which in itself evokes a number of connotations. For one, the bubble wrap is a packaging device that serves as a barrier between what is contained within and the forces that threaten to infiltrate from outside. Donnely sees a tongue-in-cheekness to ‘bubbles’ under the surface of the tub, though the title “Bath House” summons a decidedly specific and historical connotation.

While public baths have an ancient history, starting in the 1950s, ‘bathhouses’ referred to specifically designated commercial spaces for gay men to engage in recreational and sexual activities. While bathhouses ranged in scale and operation, the regulation of sexual activity in these spaces reached utmost scrutiny during the AIDS epidemic, resulting in a wave of fear, paranoia and unrelenting discrimination against the nation’s gay communities. Donnelly’s bubble wrap lining the interior of the bath reminds of the dread of this era and the unrelenting panic that permeated American culture during this time. Most tragic of all is that this unrelenting fear of contracting the virus was, even at the time, unwarranted and came at a tremendous cost to the thousands of AIDS victims, further stigmatizing the already badly disenfranchised LGBT communities. It’s impossible, therefore, not to make such connections when viewing Donnelly’s work, as the wrapped bath reads as a reminder of the dire consequences of America’s discriminatory inclinations.

By virtue of their form, three dimensional artworks share our space and, at their best, inform and complicate our understanding of ourselves in those spaces. The fact that a geometric object configured in a certain way can read as both modernist sculpture and a functional hot tub/bath hybrid is a fascinating testament to the power of associative ritual. Bathhouse artfully relishes in the politics of space, memory, and association, crafting an experience that’s both visually tantalizing and slightly unsettling. 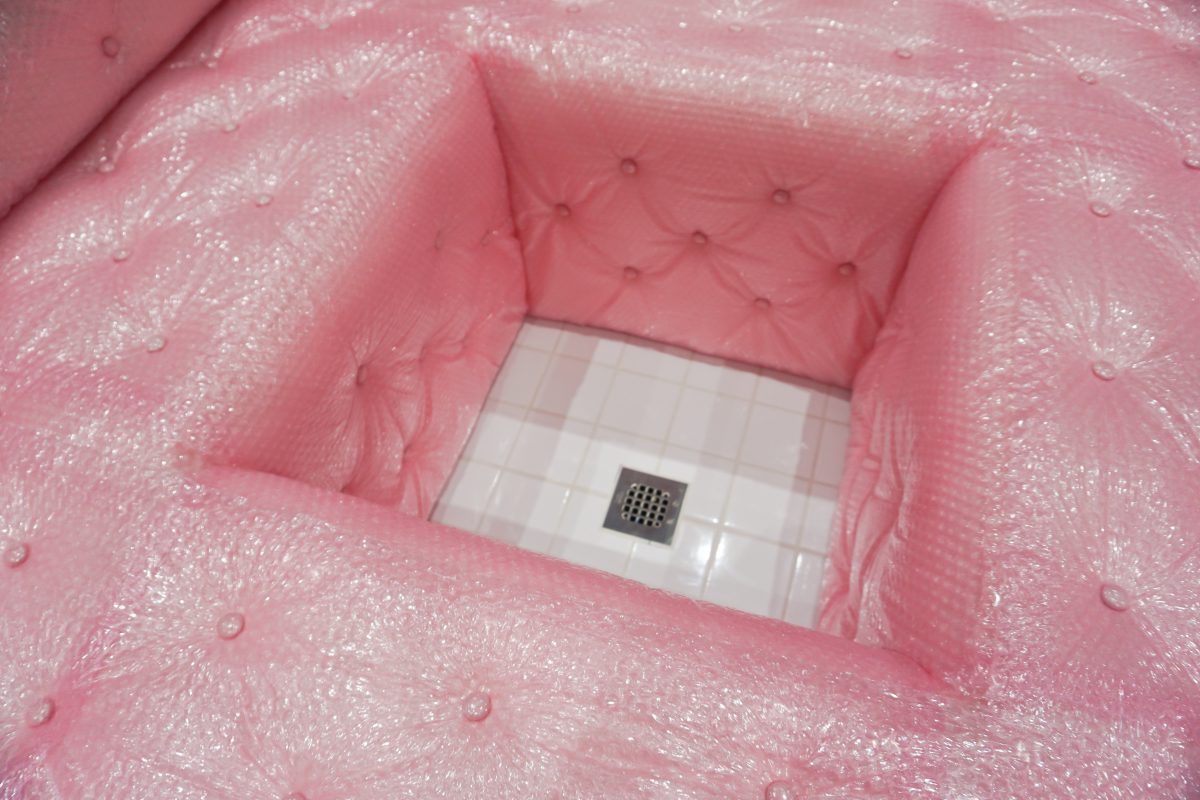