BalletX Brings a Bevy of Dance Forms to Ogden 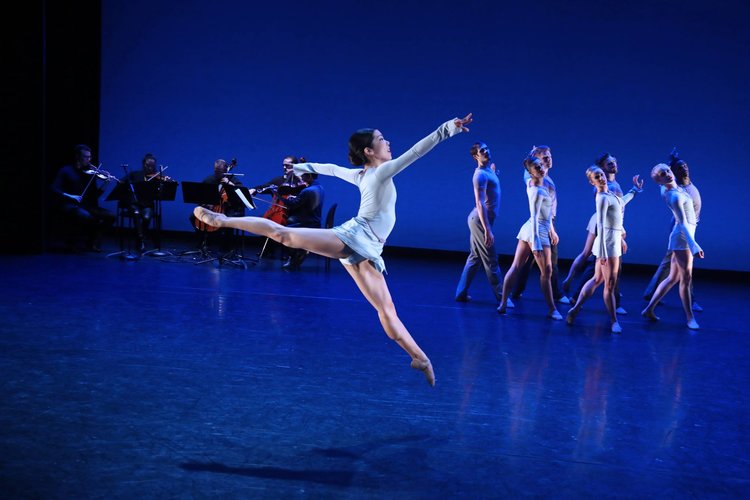 The Ogden Symphony Ballet Association (OSBA) was founded with the mission to bring classical concerts from Salt Lake City to Weber County, and now presents music and dance programming from nationally and internationally renowned touring companies to audiences in the greater Ogden area. BalletX is a Philadelphia-based contemporary ballet company that premieres many new works by prominent choreographers to their home audience, as well as taking programming on tour throughout their season. OSBA’s presentation of the company at Weber State University was composed in the manner of most touring shows, a triple bill. A nearly full complement of nine company dancers performed in each piece (save all but one dancer in the first).
Vivir opened the night with an evocation of Spanish Harlem. Choreographer Darrell Grand Moultrie cites exposure to the beauty, power, and ubiquity of the Latin music of his birthplace in the program notes. Besides having worked broadly in ballet and contemporary dance, Moultrie has choreographed extensively in musical theater, from Broadway to Beyoncé’s world tour, whereby this love of music is clearly borne out. In Vivir, the musical selections occasionally overwhelmed the dancing as a focal point. Ballet generally is performed to a score, rather than a performing of the score, as in musical theater; this formed an emotive disconnect in the more lyrical solo, but served well in the instrumental sections and the accompanying duets and ensembles.

The introductory solos featured the lithe athleticism and startlingly sharp pointe work that came to characterize the dancers’ performance quality throughout the evening, with heavy sidelight defining their muscularity. Solos transitioned to small groups, notably a fluid, self-contained male trio, which gave way, with a certain sense of inevitability and familiarity, to pas de deux. The partnering was both tricky and nuanced. The highlight of Vivir was a sultry pas de deux culminating in a lift, at which point another couple entered dancing to the quicker, brighter motifs in the transitioning music, while the lift slowly and languidly reached the ground. Including these differing musical interpretations in one duet was a masterful way to evoke social dance with beautiful, clear contrast.

The larger-scale contrast of the (rather too) dimly lit solo danced by Richard Villaverde was less effective. The abrupt shift from de rigueur colorful mesh-paneled unitards and the infectious joy of Latin Jazz great Tito Puente and new-school classical guitar duo Rodrigo y Gabriela, to the black-clad, bare-chested defeated-man-on-center was a moment of drama that encumbered the following solo. The choreography was rather quiet and mellow, and perhaps under-articulated to match the continuing melodrama of the song’s overt plaintive lyricism. The following transition from dynamic duets of technical virtuosity in ever-flirtier iterations of costume, into the full ensemble featuring the over-familiar single line of exuberant individual movements, never recaptured the nuance of the foregoing pairings. Although the progression of movements felt rather formulaic, the brighter sections were danced with unwavering alacrity and technical prowess.

BalletX co-founder and choreographer Matthew Neenan sought to create a “more purely musical” piece, as a reprieve from narrative/conceptual focus, to the strains of Schubert in “Increasing.“ The loveliest motif emerged quickly and was reprised often in the form of two simultaneous duets, two blue-skirted women downstage right and two men upstage left in earthy neutrals. The duets were consistently fully motivated both in contact and musicality. These pairings achieved a level of abstraction that truly suited the stated intent: a non-narrative representation of the musical changes, themes, and subtleties. Each dueting couple was completely attentive from one partner to another, lending clarity to the full scope of the stage and tension to interwoven moments between the pairs. Subtly choreographed deviations by one dancer from unison phrases read as effective moments of pattern-break, and never as mistakes, which is a difficult feat.

At its best, “Increasing” reminded me of watching Disney’s Fantasia as a youth, seeing classical suites interpreted with abstract movement and forms. That is, however, a difficult conceit to sustain. As the piece progressed, again familiarly, from the duets into pas de deux and ensemble sections, the introduction of the “Allegro” section left little to be explored. Much of the choreography was novel and ambitious, and all was executed beautifully; but the larger structure of movements compromised a sustained interest, not quite living up to the swelling intensity suggested by the title. As with the first piece, I was engaged for a full two-thirds of the performance and then found my attention wavering. In each case, I would wish for a less predictable progression of movements and more thoughtful utilization of the cast, perhaps not featuring the full ensemble, as well as a little stagecraft.

The final performance of the evening answered each of my aforementioned desires of structural reform, and then some. German for “checkmate,” Schachmatt was in fact consistently winning. The curtain opened on a silent stage already in motion with a repeated unison flourish of many hands, discernible through the diffuse fog and theatrically prominent upstage row of floor lights. Toplight filtered down as the chanteuse of “J’attendrai,” a pop favorite of occupied France, began to sing. The dancers were uniformly dressed in matching monochrome gray shorts, button-ups, and ties, with the jaunty addition of a jockey-like black-billed hat, perhaps best described as a ‘60s Mod scooter-fashion send-up. The unison gestures continued, allowing each frequently cheeky motion to be fully delivered through repetition before transitioning to the next. This basic theme was carried throughout and somehow never once became tiresome.

Through a series of seven vintage pop tunes, noir theme songs, mambos, and other inherently danceable selections, groups entered and exited deliberately through the wings. The dancehall was thus evoked but never actualized as vaudeville or chorus line. Cayetano Soto’s choreography adhered to his central vision with remarkable conviction. New brief phrases were serially introduced and developed with repetition and minimal variation, which allowed them to be truly seen. I have seen and appreciated this structural approach with more minimalist schools of subtle gesture, but rarely with motions this full-bodied, energetic, and vigorous. The dance vernacular included some very current street styles alongside older social dance and original contemporary movement. A great strength and cohesion was achieved with the choice of allowing these styles to coexist in the same world, undifferentiated in quality or treatment, creating an exuberantly articulated whole. Breakaway duets and groupings were reintegrated with the very classic approach of all parties repeating the current danced theme through the transitions — and it worked seamlessly.

Schachmatt ranged from silly, to sexy, to strangely emotive, as in the final movement wherein the men faced the audience in a downstage line and were embraced from behind with gently enfolding hands as they executed a cyclic series of measured gestures. This piece alluded to historical and worldly referents while realizing a feeling and context all its own, never relenting in novelty, in the very best sense. It made me appreciate the virtuosity and versatility of the BalletX dancers and the company’s commitment to showing new contemporary works for many and varied audiences.