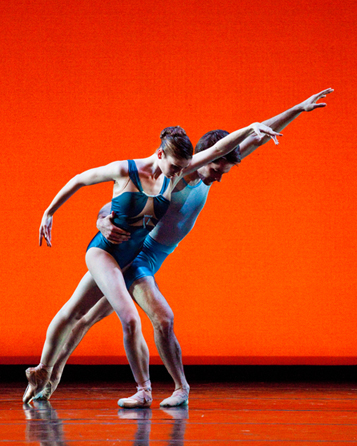 Because I’m invested in watching the choreographic process unfold, Innovations has always been one of my favorite Salt Lake City concerts. I find it significant that Ballet West supports the emergence of new methods in dance-making by creating a format for company members to develop new works. It’s a format I wish other companies would take up:  other than Momentum, a Ririe-Woodbury alumni concert which has been absent for two years, Salt Lake organizations often form clear boundaries between choreographer and performer.

For Ballet West, Innovations is a time to break down those distinctions and offer a glimpse into the way each performer is engaged with choreography as well as their ability to propose concepts and a budget to the company. For the last six years the results have been varied and the past two weeks were no exception. On one immaculate white floor, lit expertly by Nicholas Cavallaro, patrons were treated to works by Christopher Ruud and Easton Smith — the evening’s highlights — as well as works by Christopher Anderson, Adrian Fry and guest artist Jodie Gates.

Smith’s premiere of “Mechanism” exceeded his efforts from last year’s “With You.” In both dances, Smith’s interest in drama is clear, but in the current work  the scope of his choreography extends beyond performance presence to complex staging. His decision to bring the lighting structures onto the stage and the transitions of the dancers into the audience space was bold. Less clear were his choices for costuming, demonstrating that Innovations’ role as a developmental forum for these emerging choreographers means the works will likely be refined with future performances.

When Ruud’s “Trapped” was first staged in 2011, for instance, the score seemed to overwhelm what is an intriguing use of space, where solos and duets emerge from a confining group structure. The current iteration is much more clearly realized, while maintaining the freshness exhibited in the premiere. Watching the work evolve over time illustrates Ruud’s decisions, as he was able to find brevity as well as precision.

The polish of a more experienced choregrapher is evident in the work of Jodie Gates, a guest artist who began her career as most of these choreographers did, while dancing for professional companies. In her rapidly shifting “Mercurial Landscape,” a piece with lively partnering, fluid use of space and deep musicality, the dancers performed with sheer enthusiasm, providing a great cap to the evening.

The presence of Gates, the lone female among a quarter of male choreographers, begged the question of where the women of Ballet West were in the choreographic ranks — in past years, for example, Emily Adams’ works have been some of the audience favorites. The overarching lack of women’s choreographic ideas may speak to formal traditions of ballet, and the continuing need to develop modes of representation; or it may simply be coincidence that there were no women in the company interested. But it’s worth mentioning that last week at New York’s Danspace Project Katy Pyle tackled these issues and more with her premiere of Ballez, while the BYU Museum of Art showcased women choreographers at their opening of Work To Do on May 17, and Sugar Space is currently preparing their fourth SUITE, a program exclusively for women choreographers.

Ballet West’s Innovations 2013 took place May 17-25 in Salt Lake City. This article was originally published in loveDANCEmore, a journal devoted to dance in Utah, and appears here as part of a partnership to expand 15 Bytes’ dance coverage.