The mixed repertoire of three works is the company’s first live indoor performance since the onset of the COVID-19 pandemic eight months ago. It is beautiful, impactful, and reflects the moment we inhabit. Their return to the Capitol Theater stage was marked by rigorously enforced safety measures, including mandatory masks, distancing, a symptoms checklist, and staggered audience seating and release. It also featured curtain speeches by artistic director Adam Sklute that presented care and respect for those precautions and for one another as a basic premise of the evening; an acknowledgment of the unprecedented challenge to the artists and appreciation of their growth and investment in meeting it; and insight into the process of both the creation and commission of the works presented. I appreciate the transparency and clarity those remarks imparted.

Ballet West has a continuing responsibility to meaningfully and materially address equity and systemic racism institutionally and structurally. Their “Substantive Policy Changes to Allow for Greater Equity for Dancers of Color” is linked here. The first installment of the ongoing discussion panel series “Dismantling Racism in Ballet” led by Dr. Elizabeth Pryor and hosted by Ballet West is linked here. Though it is not an institutional responsibility in the same material and absolute sense, I am very glad that the night’s works explicitly reflected and responded to the emotional quality of living this year. Jennifer Archibald’s premiere “Tides” evoked resilience in the face of omnipresent change, and Nicolo Fonte’s premiere “Faraway Close” treats the loneliness and solace of distance and connection. The “Nine Sinatra Songs” for which the performance is named sets a precedent for what the restaging of existing works during the ongoing and locally escalating viral outbreak looks like.

Inescapably prominent in Jennifer Archibald’s “Tides” is the great individual strength of the dancers, their nuanced fluidity, and most notably the way these qualities combine in partnered duets. Although the costumes of sea-blue mesh-paneled leotards and pants were gender-specific, these qualities were not; shifting vulnerability and strength were equally embodied by all — and often in quick succession, like the entrance of slides en pointe into the abrupt and contained hand gestures that punctuated the piece; or the poised inversions of the men in group one, of stable handstands rolling to the floor and stalled cartwheels, where Adrian Fry’s lanky grace recalls his “Apollo.” The trio of Katlyn Addison, Chelsea Keefer and Kristina Weimer in group two battement their legs with such power, and in remarkably controlled unison, to music that is explicitly sacred in tone and sometimes more felt than rhythmically countable. The small motif of a piked position caught my eye, legs and torso forming an acute, tight angle, first in a partnered turn skimming above the floor and later in a lift, but especially in a duet between Vinicius Lima and Dominic Ballard. Beginning in a piked fireman’s lift over the shoulder, a kind of awkward and powerless position, it evolved into a gorgeous give-and-take of assertion and support characteristic of the entire work.

Nicolo Fonte’s “Faraway Close” is spare but striking in staging. A central platform symmetrically flanked by stairways stands to the back. It is perfectly lit and ascended by single dancers at moments throughout, moving in unison with those below, simply and effectively representing distance and longing. I have scrawled in my notes that everyone standing up there looked incredibly beautiful, and sad.  Emoting in that way is all the more impressive given that the dancers were masked (as they were for the entire performance). An early mirroring from across the stage between Chelsea Keefer and Katlyn Addison sets the emotional tone. The distinct quality of sharp attack into suspension of these two dancers truly stood out and complemented the style of the night’s two premieres. The unfurling of an outstretched arm is a recurring thematic gesture that also ends “Faraway Close,” with enough plaintive ennui in the port de bras that face masks are no impediment. I was struck also by an elongated attitude, a barely bent leg that might easily look like a broken line but which epitomized unbroken strength as danced by BW’s artists.

Both premieres were thoughtfully titled. The figurative breadth sets up expectations of abstraction, the non-narrative representation of action under fluctuating external forces in “Tides” and of distance as both a physical and emotional metric in “Faraway Close.” Both works were created in response to the pandemic, and in place of what was originally commissioned.  The pieces were developed within the strict constraints of small pods of dancers, with contact only among those who cohabitate. Both Jennifer Archibald and Nicolo Fonte are resident choreographers, Archibald as the first Black female resident choreographer of a ballet company at Cincinnati Ballet and Fonte at Ballet West. They seem well equipped to meet these constraints by continuing to identify the individual strengths and personal qualities of the artists, and to integrate these with craft and consideration. Whether in “Tides’” sharp hand gestures and acute pikes or “Faraway Close’s” more lyrical reaching arms and obtuse attitudes, the experience of isolation/connection under duress which has been felt universally was expressed singularly.

Twyla Tharp’s “Nine Sinatra Songs” closes the performance. How existing works are presented now is also precedent-setting for works like “Nine Sinatra Songs” that require repetiteurs to set them. There is an interplay between expert fidelity to legacy and responsibility to the here and now. Permission was granted to add matching masks to the costumes originally designed by Oscar de la Renta to prioritize the health and safety of cast and crew. Partnerships were determined not by height or hierarchy, but by true interpersonal relationships. It reminds me of the Waltz Girl’s hair cascading down in beautiful braids in 2017’s “Serenade,” or the re-costuming and movement adaptation of the Chinese divertissement in the entrenched annual production The Nutcracker. These iconic moments in established works are made better and truer by respecting those who embody them and those who come to see art that reflects their humanity.

“Nine Sinatra Songs” was iconic Twyla, and very charming. Emily Adams’ poise and outwardly-radiating epaulement immediately establishes the mood and mode in “Softly As I Leave You”; it wouldn’t surprise me if she had a secret closet full of Ballroom trophies. Olivia Gusti and Tyler Gum were particularly synchronous and bright in “Forget Domani.” Each couple was a pleasure to watch. There was a surprising melancholy tinge to that pleasure, as watching people out for a night of dancing is somewhat wistful now, and nostalgic in a complex way that is more related to lockdown than the Rat Pack. Though the applause was thinner, with the audience necessarily so much sparser, I believe we were all deeply appreciative of this experience of live ballet, and of the dedication and care that made a night at the theater possible. 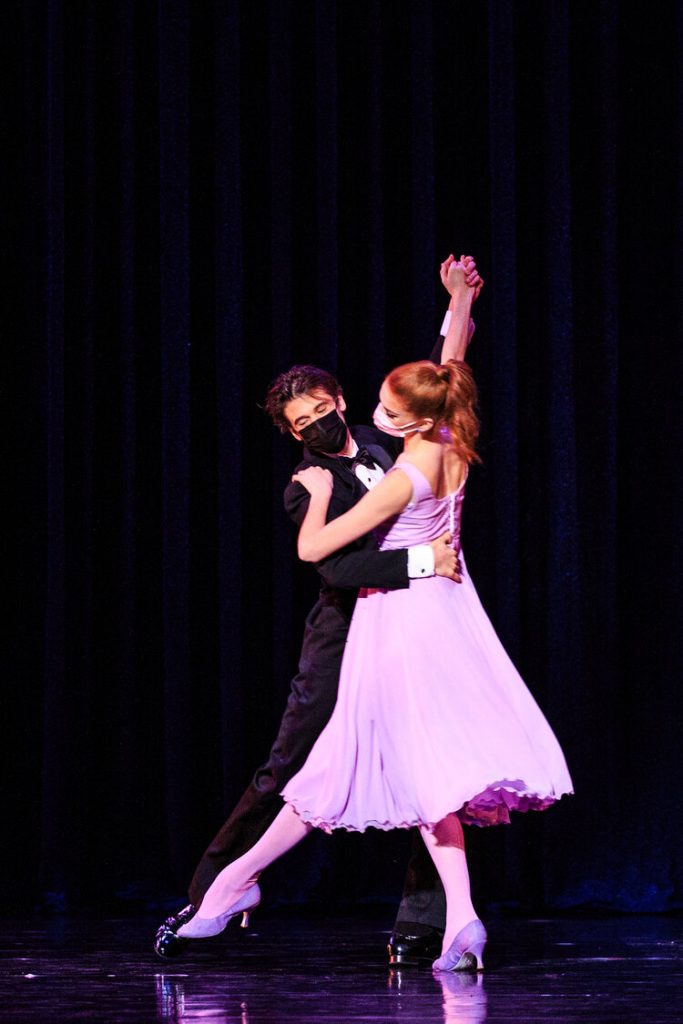