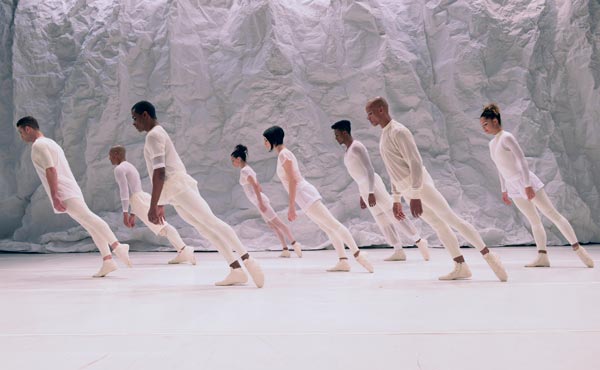 Grupo Corpo hails from Belo Horizonte in Minas Gerais, Brazil, and returned to the Eccles Center Saturday night after more than 10 years since their last Park City appearance. The company presented two recent commissions, both of which premiered in 2015: Suite Branca (White Suite) by Cassi Abranches, a young choreographer from Sao Paulo and a former dancer with Grupo Corpo; and Danca Sinfonica (Symphonic Dance) by Rodrigo Pederneiras, also a former dancer with the company who transitioned to the role of choreographer full time in 1981.

Another notable name on the evening’s program was Paulo Pederneiras, who is not only Grupo Corpo’s artistic director and a choreographer, but also designs the sets and lighting for much of the company’s repertory — including Suite Branca and Danca Sinfonica.

Also notable are Grupo Corpo’s extensive musical collaborations: Suite Branca features music by Samuel Rosa, lead vocalist and guitarist with the Brazilian rock band Skank; Danca Sinfonica was created to music by Marco Antonio Guimaraes, made up of themes from scores he has composed previously for Grupo Corpo with new musical bridges by Guimaraes’ group Uakti, and was originally performed by a 90-piece orchestra (though for obvious reasons, they performed to recorded music at Eccles).

Abranches’ Suite Branca featured all-white everything: backdrop, floor, many layers of clothing articles, and jazz boots. Resembling the “Wonkavision” room, Abranches’ stagescape was choreographically, as well as visually, striking. The dancers gestured and gyrated with their hips and pelvises while maintaining a relaxed carriage of the arms. Quick movements and torso isolations capitalized on the strengths of their cores, especially as their legs sliced rapidly into arabesques.

One favorite moment featured all the dancers leaning forward off-center and running to catch their balance, while weaving in between one another. Another had several men repeatedly executing a jump that resembled a bicycling running man. The dancers’ performance felt rather removed; they did not engage much with the audience or with one another, and the all-white surroundings were starkly clinical. However, watching the dancers’ bodies reason from one movement to the next, with few transitions in between, was engaging on its own.

Pederneiras’ Danca Sinfonica was choreographed for Grupo Corpo’s 40th anniversary. The recording of the piece’s score included the sounds of the orchestra tuning their instruments, which re-created for the audience that period of anticipation before the music and dance truly begin. The drops for the wings had been changed to deep red, which was mirrored in the women’s red velvet biketards (the men were in all black). Jazz boots were once more the footwear of choice (and why are they not a choice more companies make in place of socks?).

Danca Sinfonica was rich with fast footwork, resembling a modernized petite allegro — classically disciplined, bombastic legs with shimmying torsos and shown-off hips. While the dancers individually possessed a similar casualness in their upper bodies as in the first piece, they moved incredibly well as a unit when dancing in unison. “Grupo Corpo” literally translates to “Body Group” in English, and the company has both individually nimble bodies and moves well together as a singular body.

Unlike in Suite Branca, a narrative element was introduced to Danca Sinfonica when a female dancer appeared wearing a nude-colored biketard, in contrast with the others’ red and black. The female in nude was often held in a fetal position by her male partner, and also danced a pas de deux-like duet in which she went en pointe in her jazz boots — a testament to very strong legs and ankles, if not a little out of place in the piece’s context. The connection of the female in nude to the rest of the group was not ultimately made clear, but her dancing role did provide an even stronger case for the company’s classically-rooted strength and clarity of line.

Grupo Corpo’s company website cites the aesthetic they have honed as a “contemporary re-reading of popular Brazilian dance forms.” Having little knowledge of those dance forms myself, I feel that this observation provides interesting context for the body part isolations and gyrations found in the evening’s choreography. Giving credence to the company’s ability to simultaneously straddle and blur the line between popular and classical forms, critic Rui Fontana Lopes said Grupo Corpo has found “the most precise translation of the word ballet into the [Brazilian] mother tongue” (also cited on the company’s website). The translation was definitely precise.