Back to the Future: Utah ’10 shows local artists drawing on strong past and present trends for the promise of tomorrow

What does it mean when a work of art so upsets a member of the audience that it becomes impossible to talk about it in that person’s presence? Does it necessarily mark the work as a failure, or can it be an ironic sign of success? Does the answer depend on the artist’s intention, or is there some absolute quality that decides? Must everyone accept a work for it to be considered art, or contrary to that, is there something about art that requires alienating some portion of the audience?

These questions came up shortly after the Utah Arts Council Statewide Annual: Mixed Media and Works on Paper exhibition opened. The work that set off the fuss was “Ammo Table” by Joe Norman, in which the top of a coffee table is made of hundreds of cartridge cases arranged to form the vague image of a man with a halo. The issues raised by the material and technique the artist chose, let alone his intended meaning, were anything but settled in my mind when another audience member announced decisively that it could only be one thing: it had to be a statement about how Christianity causes war. And while the person who made this connection was not happy about it, it wasn’t because the implied connection was slander or sacrilege. The fault lay in the theme’s familiarity. We’ve seen this before, it’s been done enough, and the work should be declined a public showing because it has nothing new to say. No one could defend it from such a charge; few tried. But the thought that I, as critic, came away with was very different from the denouncer’s intention. If a work of art that seems to want to provoke can raise such hackles, who am I to say its theme is exhausted? Who is to say that it has failed?

One thing we did agree on, though, is that the mixed media and works on paper exhibition is one of the most reliable, time after time. Our explanation is simple: more often than not, mediums become mixed when an artist ventures into unfamiliar territory. An element out of the ordinary gets thrown in, whether experimentally or deliberately, and something happens. Call it alchemy or call it collage, but in any event it transforms a familiar exercise into an adventure. Paper isn’t always an afterthought, either: whether because it’s cheap, because it’s accessible, or because of its protean vigor and eagerness to become whatever is needed, paper supports some of the best known works in art. Everyone recognizes Edvard Munch’s “The Scream,” but how many realize it was painted in oil, tempera, and pastel on a piece of ordinary cardboard? 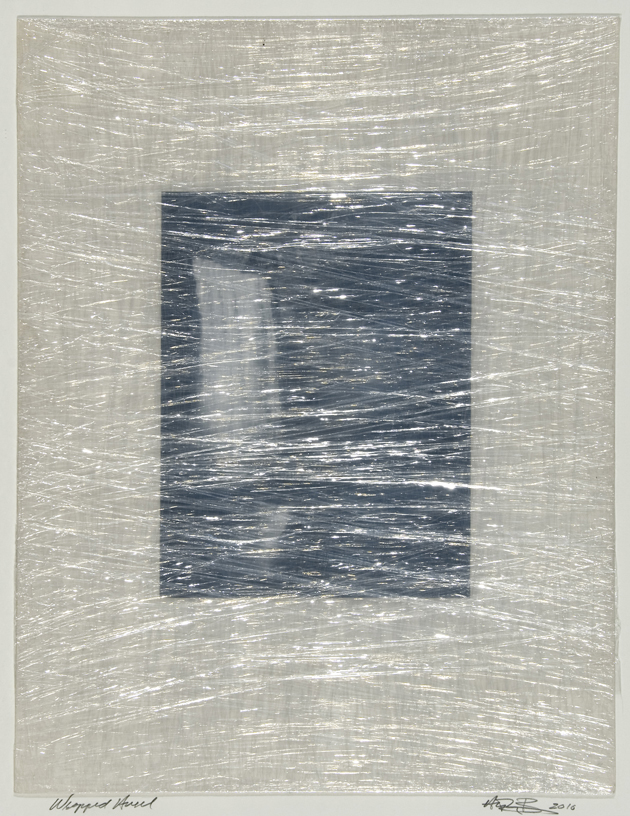 As anticipated, then, this year’s Arts Council Annual is a strong show even if it doesn’t—or perhaps because it doesn’t—exactly live up to its ‘statewide’ billing. College art programs, workshops like SaltGrass, and cooperative studios like Poor Yorick are clearing houses for new or unconventional techniques and give the capitol city an edge over places where artists may go to be left alone. Proof comes in the form of Salt Lake stalwarts, like Eric and Sandy Brunvand, Stefanie Dykes, and Joey Behrens, each of whom turned in top-notch work. That we’ve seen it before can be excused on the grounds that part of this show’s point is to sum up the year. Something similar can be said for the likes of K Stevenson and Sam Wilson: an annual without them would be like a Christmas without our favorite Aunt and Uncle; and if we already know what to expect, that’s part of the pleasure. 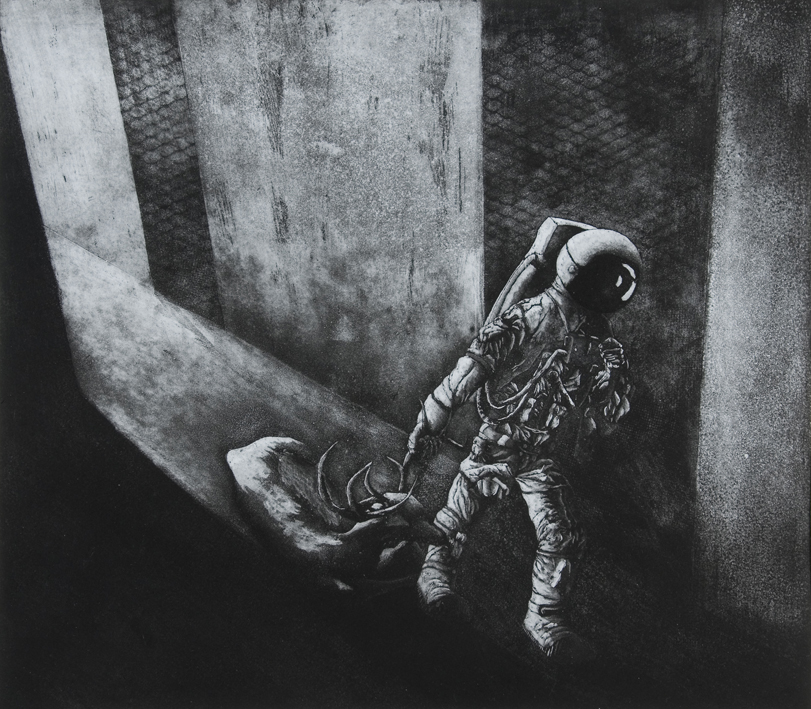 In our dreams, of course, we sometimes get to confront an artist—no doubt the way Joe Norman’s critic would have enjoyed doing on opening night—and demand to know “What were you thinking?” Arthur Bacon’s “Wrapped Ansel Adams”—a signed Adams print wrapped the way my sister does with a re-heatable plate of leftover spaghetti—left at least one viewer divided as to whether he should smack the so-called artist, or just liberate the photo to hang on his own wall where it would be appreciated. In other instances, it’s the jurors one wants to confront. Andrew E. Rice’s “Dragging,” a black-and-white image of an astronaut dragging a dead deer by the antlers through an alien landscape not only got in, but won a prize . . . both without adding anything to our knowledge. Not everything that is murky is ambiguous; sometimes it’s just not clear.

A surprise favorite among the audience was Nancy Steele-Makasci’s hand-sewn, playfully self-referential book, “Sewing Made Easy.” What made the success of this exercise in folk philosophy a surprise was the difficulty of appreciating a book that one can’t touch, open, or read. Placing it in a vitrine alongside Stefanie Dykes’ “Querl,” made from a book she cut up and folded into a supercharged hyperspace Möbius strip, created a cerebral Alpha-and-Omega of the much-mourned but still surprisingly vital codex method of bookbinding. Among the other sculptural mixtures, Nolan Baumgartner’s “Winter, Spring” underscores the value of keeping an eye on GARFO, where his Monopoly houses on potato chips fields and perception-altering photography first appeared as part of their Micro/Macro show. A personal favorite was Shirley Tegan’s “Bondage,” which despite being easily overlooked may have made the most radical statement here by turning the Pre- v. Post-Modernist question on its ear. Although at first glance the quintessential found object or Assemblage, this rusty iron bracket holding an ancient, massive timber is entirely fictitious: carved and painted from wood by the artist. Isn’t presenting simulacra and fooling the eye something art has always done? 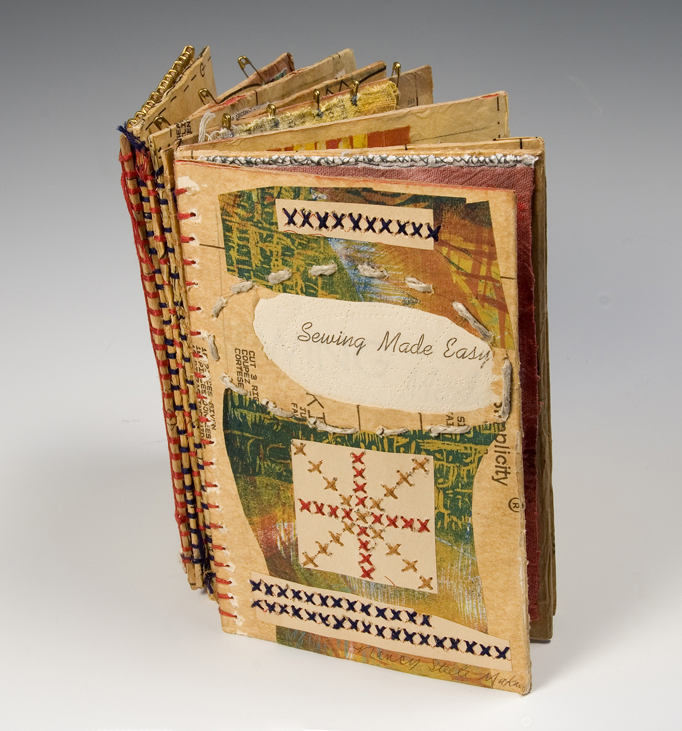 “Sewing Made Easy” by Nancy Steele-Makasci

One thing that doesn’t fool the eye is Travis Tanner’s “In God We Trust,” which takes as its subject the way Wall Street bankers and financiers get away with fooling their regulators and our legislators. It’s a cool, immaculate construction that plays like toys or theater with the righteous anger currently rising against a system that lets a few get rich gambling with the lives and livings of everyone else. Once again, what appears to be about today has its roots in the Renaissance, when great Baroque painters were hired to make grand frames and only incidentally filled them with great paintings. It was also during the Renaissance that the Medici, great art patrons, invented global banking.

With 43 artists present and not a one of them unworthy, it’s finally necessary to fall back on impressions and trends. Much of Utah ’10 reads like a memoir of our daily lives. Surprisingly, our celebrated redrock gives way—like Ansel’s waterfall—to the local subjective landscapes of Eric Brunvand, Liza C. Julian, Justin Wheatley, Joey Behrens, Kevin Doyle, James M. Rees, and Curtis Olson, whose “School House Horizon” shows the prairie to be bedrock even here. In closing, it would be wrong to overlook the astonishingly original drawing in Alison Denyer’s vision of earth from space, Una Pett’s living sketchpad and indoor forest, and Jane Catlin’s “Coalesce”: a crayon-on-linen closeup of nature that took home this humble viewers ‘Best in Show’ prize by proving that so simple an act as choosing the right crayon and material to draw on can still transcend reality and create—magic.