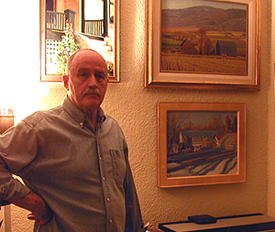 Bevan Chipman, a friend to many of us at 15 Bytes and a champion of the visual arts in Utah, died Saturday after a long struggle with prostate cancer. You can view some of his paintings at his website. Read about his role as a collector here and as […]

Our August edition is now online. If you have any comments place leave them by clicking "comments" at the bottom of this post. Shawn RossiterThe founder of Artists of Utah and editor of its online magazine, 15 Bytes, Shawn Rossiter has undergraduate degrees in English, French and Italian […]

Okay, after a few bumps in the road the July edition of 15 Bytes is now online. Do you have something to say about this edition? Click "comments" at the bottom of this post to tell us what you think. Did you agree with our reviewers? Did one […]

The June 2007 edition of 15 Bytes is now online. If you have any comments about this edition please make them by clicking the "comments" link below. Shawn RossiterThe founder of Artists of Utah and editor of its online magazine, 15 Bytes, Shawn Rossiter has undergraduate degrees in […]

Getting our June edition ready

We’re in the thick of it now, getting the June edition ready for publication on Wednesday. You won’t need a novel to take with you to the beach or lake this summer; just print out a copy of the June edition and you’ll have plenty to read. In […]

A Note on Our Bookswap

We realize that many of you are probably sick of our month long barrage of emails so we’re posting this note on our blog. We appreciate everyone’s financial support during our Spring Fundraiser. And we want you to know that despite our sometimes playful emails, we consider very […]